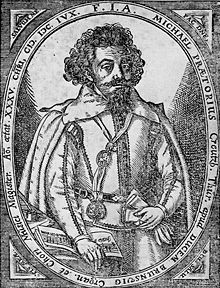 Michael Praetorius , also Michael Prætorius , actually Michael Schulteis (born February 15, 1571 in Creuzburg near Eisenach , †  February 15, 1621 in Wolfenbüttel ), was a German composer , organist , court conductor and scholar in the transition from the Renaissance to the Baroque period .

Notice board in front of the property of Praetorius' birthplace in Creuzburg , which was destroyed by fire on September 24, 1634

Michael Praetorius was the youngest son of six children of the strictly Lutheran pastor Michael Schulteis. In Torgau he attended the Latin school for about 10 years, where the musical tradition of Johann Walter lived on .

He continued his school attendance at the Latin school in Zerbst . There he lived with his sister and probably had organ lessons from Thomas or Lukas von Ende.

In 1585, at the age of 13 or 14, Praetorius began studying theology and philosophy at the Viadrina University in Frankfurt / Oder . His oldest brothers Andreas (born before 1549) and Johannes (born 1552) lived there as pastors. Andreas was court preacher to the Elector of Brandenburg and rector of the university.

After the death of both brothers, the church administration offered him a position as organist at the St. Marien University Church . He was able to earn his living for about three years until he left Frankfurt for unknown reasons in 1589/90 - without having finished his studies.

Residence and activity during the years 1589–1594 have not yet been clarified. It is possible that he continued his studies in Helmstedt and had family ties to his sister Brigitte, whose husband Daniel Sachse had been chief preacher in Halberstadt since 1591 .

Chamber organist from around 1594

In any case, it is certain that Praetorius had been employed as chamber organist by Duke Heinrich Julius (born 1564, regent 1589–1613 in the Principality of Braunschweig-Wolfenbüttel ), Bishop of Halberstadt and Duke of Braunschweig and Lüneburg, from around 1594 . Presumably the Duke had heard of the talented young organist and induced him to take up the music profession and to give up studying theology. “At the time I had become an organist, I could have become a great doctor,” Praetorius later wrote (letter of September 1608, Deters 1971, p. 108). As a well-educated court official, Praetorius sometimes had to take on the duties of a secretary; According to tradition, he was also the "secret chamber secretary" of the Duchess Elisabeth.

In addition to his residence in Wolfenbüttel , Heinrich Julius had his bishopric in Gröningen near Halberstadt, which he had expanded into a splendid Renaissance castle. The Halberstadt organ builder David Beck built a magnificent organ with 59 registers in the castle chapel between 1592 and 1596 . As a chamber organist, Praetorius was able to follow the construction of this instrument in detail. For the inauguration of the Groeninger organ - the third largest in Germany at that time - the duke organized a festival and invited 53 organists from all over Germany to an audition. During the festival Praetorius had the opportunity to meet famous colleagues, including Hans Leo Haßler from Nuremberg and Hieronymus Praetorius from Hamburg.

Hofkapellmeister under Duke Heinrich Julius from 1604

In December 1604 Praetorius was appointed court conductor to succeed Thomas Mancinus and from then on lived in Wolfenbüttel. Praetorius was thus responsible for the court orchestra with its approximately 18 singers and instrumentalists and had to provide music for worship services in the palace chapel as well as table music at festive or private meals and dance music at court celebrations. These and other duties, including some rights, were laid down in the appointment document. He had z. B. to give daily instrumental lessons to the duke's sons and daughters. The payment corresponded to that of a senior court official: an annual salary of 100 thalers, 10 thalers of wood money, a free table at court, summer and winter court clothes, an ox, two pigs, four bushels of rye, four bushels of barley as an annual deputation.

As court conductor, he continued to be a chamber organist.

During this time, Praetorius made several trips, among others. to Bückeburg, Kassel, Regensburg and Prague , also on behalf of the Duke. Close family connections between the Wolfenbütteler Hof and the Electoral Court of Dresden led to trips there several times.

Immediately after being appointed court conductor, Praetorius published his first collections of works, the Motectae et Psalmi Latini (1605/07) and the Musae Sioniae I (1605), which were probably created during his years as chamber organist. Praetorius probably acquired the art of composition as an autodidact.

After the death of Duke Heinrich Julius in 1613, the music in Wolfenbüttel was silent because of the year of mourning and Praetorius was given leave of absence to the electoral court in Dresden. After that he lived and worked again in Wolfenbüttel, but remained connected to the Dresden court as "Capellmeister by default". that is, he stayed in his Wolfenbüttel appointment and occasionally traveled to Dresden for performances on festive occasions. From 1616 he also worked in the same function at the Archbishopric Magdeburg Court in Halle / Saale .

As a composer, he conducted numerous festival music on various occasions:

In addition, Praetorius composed the music for the centenary of the Reformation in Dresden ("Polyhymnia Jubilaea", not preserved), which was performed under the direction of Heinrich Schütz .

In addition, he was musical advisor at the royal courts in Bückeburg , Rotenburg / Wümme , Sondershausen ( Loh Orchestra ) and at the Danish royal court in Copenhagen (1618).

Together with Samuel Scheidt and Heinrich Schütz (not secured), the Magdeburg Cathedral Music was reorganized in 1618 and the new Fritzsche organ of the Bayreuth city ​​church was inaugurated in 1619 with Scheidt, Schütz and Johann Staden . We know of trips to Leipzig, Nuremberg and Bückeburg, of an exchange of letters with Seth Calvisius (see Syntagma musicum II / III) and the acquaintance with Johann Hermann Schein .

His collaboration with the organ builders Esaias Compenius (e.g. "Compenius-Orgel" in Hesse Castle in 1610 , donated to King Christian IV of Denmark in 1616 , preserved unchanged as the " Organ of Frederiksborg Castle ") and Gottfried Fritzsche (z B. 1621 organ in the newly built Beatae Mariae Virginis church in Wolfenbüttel).

Only Heinrich Grimm is known as a pupil (around 1607 chapel boy in the Wolfenbüttel court chapel). Conclusions from Syntagma musicum point to an extensive correspondence with Italian printers and publishers in Florence, Rome and Venice, as a result of which Praetorius must have owned numerous compositions and writings by Italian composers. No discount has been received.

In 1619 Praetorius left a legacy with a foundation of 3,000 Mariengulden to support theology students or the poor in cities where he or his family had lived: Creuzburg, Torgau, Treuenbrietzen, Frankfurt / Oder, Dresden, Halle, Zerbst, Halberstadt and Wolfenbüttel. The interest was only paid once, however.

Praetorius was prior of the Ringelheim monastery near Goslar . As a rule, this honorary position was associated with a benefice . He was also a conventual of the Amelungsborn monastery.

Praetorius died on February 15, 1621 and was buried under the organ loft of the main church Beatae Mariae Virginis in Wolfenbüttel ( Marienkirche ). Its epitaph has not been preserved.

Praetorius left a large number of valuable church compositions ( fairs , motets , anthems , hymns , etc.), but also secular dances and musicological writings. His most important book, the Syntagma musicum (vol. 1, Wittenberg / Wolfenbüttel 1615; vol. 2 and 3, Wolfenbüttel 1619; Ndr. Kassel 1958–1959), is today the most important source of performance practice for early baroque German music. The three-volume treatise describes in detail contemporary musical practice and all musical instruments in use at the time .

Praetorius published his compositions in 20 volumes during his lifetime. The first nine, Musae Sioniae ("Zions-Musen", 1605–1610), contain around 1244 chorales and song arrangements that reflect the musical legacy of the Reformation . Volume 11, Missodia Sionia , contains sacred music for worship for two to eight voices, including an eight-part mass.

The modern complete edition of his compositions, published by Friedrich Blume in 1929 , comprises 20 volumes plus index volume. Michael Praetorius is best known to a wide audience for his four-part setting of the Christmas carol Es ist ein Ros sprung .

The counterpart to this, secular musical works, is what Praetorius calls Musae Aoniae ("Aeonic Muses") in his writings . In his treatise Syntagma musicum, he notes that he originally planned eight volumes under this title. Only his collection of 312 mostly French dances has survived, which he published in 1612 under the title Terpsichore , the name of the Greek muse of dance .

The following of his works can be found in today's Evangelical Hymnal:

Because of his merits, the Lower Saxony Music Prize was named after Michael Praetorius.