1498 put Pope Alexander VI. a letter of foundation for the university. In the same year, construction of the college building began on the site of a synagogue destroyed in a pogrom . The construction manager was Stephan Hundertmarks, who later became mayor. The financier was the city ​​council . By the time the two-story building was completed in 1507, the project cost the city 1,100 shock groschen .

On March 15, 1506, Pope Julius II approved the establishment of the Alma Mater Viadrina. It was founded on April 26, 1506 by Elector Joachim I as the first university in Brandenburg . In the year it was founded, over 900 students from Germany, Poland, Sweden, Norway and Denmark registered. The city of Frankfurt an der Oder then had 5,000 inhabitants .

The four classic faculties were operated at the Viadrina, i.e. theology , law , medicine and philosophy .

To the pride of the city, the Kollegienhaus received a water pipe in 1511. Twelve salaried masters from the artist faculty taught in the two lecture halls .

Shortly after 1516, the library with the first holdings from an inheritance from the late Siegfried Uttensberger was laid out in the attic. From 1659 Jonathan Le Clercq was the university's first librarian . Alongside the state and university library in Königsberg, the library became one of the largest in Prussia .

In 1678, on the orders of Elector Friedrich Wilhelm, a botanical garden was laid out west of the building . Bernhard Friedrich Albinus had an anatomical theater built on the ground floor in 1684 . 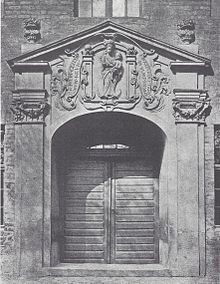 Entrance portal, above the Madonna and the Latin inscription (approx. 1911)

The building was threatened with collapse in 1690 due to damage from the Thirty Years' War and the subsequent neglect of the building fabric. From 1693 to 1694 the building was then thoroughly restored and raised by one floor, the decorative gables were removed. Above the entrance was a crescent Madonna . The cartridge bore the inscription:

The renewal of Prussia after the Peace of Tilsit (1807) also included a reform of the universities. When the (Pietist) Friedrichs University Halle was closed by Napoleon Bonaparte after the battle of Jena and Auerstedt , it was replaced in 1809 by the (reformed) Friedrich Wilhelms University in Berlin . The Crown of Prussia closed the Viadrina in August 1811 and united it with the Leopoldina in Breslau to form the Silesian Friedrich Wilhelms University . Many professors went to this new full university , others to Berlin. The library's holdings of around 28,000 books were shipped across the Oder to Wroclaw in the same month at the instigation of Professor Schneider .

Further use of the Kollegienhaus

Residential building on the grounds of the Kollegienhaus (around 1900). Built in the early 17th century, it probably served as accommodation for professors and students.

After the university closed, the middle floor was given to the pastry chef Couriol, who was allowed to host masked balls there. In 1815 the building passed from the state to the ownership of the city and the basement floors were used as hay and straw stores. In return, the city left the city school building, the city courtyard, to the state. However, the library of the Royal Friedrich School has been located on the top floor since 1758 .

In 1822 the building was converted into a city school after the stocks had been moved to the nearby Fouragemagazin . The renovation was planned by the town planner Clemens; The work was carried out by master bricklayer Riegel. School operations began in November 1824.

On April 25, 1911, the school moved to a building on Wieckestrasse. From 1914 to 1945 the Kollegienhaus served as a primary school (Georgenschule). It survived the Second World War without major damage and was therefore used in 1945 as accommodation for refugees from the eastern regions of the German Reich .

After that, the building remained unused. In 1953 there were plans and funds had already been granted to set up a youth club here; however, the plans were rejected by the State Planning Commission . Efforts to protect monuments were also unsuccessful. On December 20, 1962 at 2 p.m., the building, which had since fallen into ruin, was demolished to make way for a planned residential complex.

Between 1506 and 1811 there were more than 250 different prorectors . Rector was the sovereign . Many professors were rectors several times. From 1509 to 1749, the filling of the position changed every semester.

Before she was moved to Wroclaw , 55,000 people were studying at the Alma Mater Viadrina. 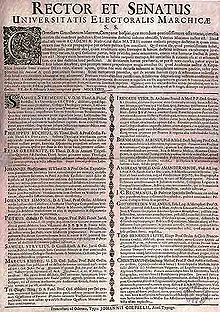 When the university opened, as in most of Europe, Jews were prohibited from enrolling. When Elector Johann Sigismund (Brandenburg) converted to the Reformed Church in 1613, the Frankfurt University tended more and more to Calvinism . The later professor, university librarian and rector Johann Christoph Bekmann visited the University of Leiden , which was open to Jewish students, as part of an educational trip in 1663/64 and was “taught in Talmudic and Arabic” by Rabbi Jacob Abendana in Amsterdam . In 1673, Bekmann opened a printing house in Frankfurt that printed Hebrew works, including the first complete edition of the Babylonian Talmud in Germany in 1697 .

On April 29, 1678, the elector Friedrich Wilhelm Gabriel Moschowitz (also "Gabriel ben Mose") and Tobias Moschowitz (also "Tobias ben Mose" from Metz) granted the right to study at the university as the first Jewish students. Studying, however, was not easy due to the professors' insults and derogatory remarks about Judaism. Both later obtained their doctorate at the University of Padua , as they were denied it in Frankfurt. Tobias later became the Sultan's personal physician in Constantinople . Salomon Liebmann was the next recorded Jew, who also studied at the Viadrina from 1695 at the behest of the elector. A Jew received his first doctorate on October 15, 1721. Moses Salomon Gumpertz , who had previously studied at Charles University , received his doctorate . By 1794, 29 Jews had received doctorates in medicine, including Marcus Elieser Bloch .

The last registered Jewish student at the old university was Wilh. Salomon Hirschel, who signed up on September 28, 1810; However, he could not finish his studies due to the closure of the university in Frankfurt. A total of about 140 Jews had studied in Frankfurt by then; most of them came from Poland-Lithuania , some from Prague and Amsterdam, one from London.

The students were organized in small circles . The conscripts wore country team uniforms. On February 16, 1798, the Frankfurter Kränzchen founded the first senior citizens' convention in Germany. The SC-Comment is the oldest preserved.

In 1906, the city of Frankfurt held a 400th anniversary celebration to commemorate the founding of the university. “Our city will hardly ever be the seat of a university again,” one lamented.

180 years after the university closed in July 1991, the European University Viadrina was re-established in Frankfurt .

Today the street name An der Alten Universität and a relief wall remind of the former university.

Relief wall at the old university