The Tilsit Peace Treaty in the Secret State Archives

The Peace of Tilsit ( French Traité de Tilsit ; Russian Тильзитский мир , Tilsitski mir ) of July 7th and 9th, 1807, was a treaty negotiated and concluded in Tilsit in East Prussia , which led to the Fourth Coalition War (1806-1807) between Prussia and Russia Empire on the one hand and the French Empire on the other. The Russo-French peace treaty divided Europe into a French and a Russian sphere of interest; the Franco-Prussian agreement downgraded Prussia to the status of a European middle power. 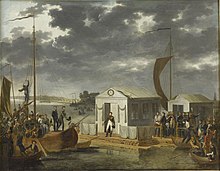 Meeting of the monarchs on the Memel near Tilsit; Painting by Adolphe Roehn (1799–1864)

After the defeats in the battles of Jena and Auerstedt on October 14, 1806, the Prussian army collapsed . Troops and fortresses capitulated to the French under Emperor Napoleon I , who entered Berlin on October 27, 1806 . The Prussian King Friedrich Wilhelm III. escaped to East Prussia . When the Russian Emperor Alexander I , who had been at war with France since 1805, intervened in the fighting on behalf of Prussia in the winter of 1806/07, the Prussian leadership was able to stabilize the situation.

On January 28, 1807, Prussia and Great Britain signed the Treaty of Memel. Both nations thus ended the sea and trade war between them that had broken out in early 1806 because of the occupation of the Electorate of Hanover by Prussia; In the treaty, Prussia guaranteed the return of Kurhannover. In April 1807, Prussia and Russia undertook in the Bartenstein Treaty to lay down their arms only by mutual consent. Great Britain and Sweden joined the alliance and set up a joint army with Prussia on Rügen .

After Russian and Prussian troops suffered a heavy defeat in the Battle of Friedland on June 14, 1807 , Alexander I, without consulting Prussia, started negotiations with the French side, which initially led to an armistice on June 23. On June 25, the peace negotiations between Napoleon and Tsar Alexander I began on two pontoon boats anchored near Tilsit in the middle of the Memel , the demarcation line between the French and Russian and Prussian troops in East Prussia , while the King of Prussia was on Shore had to stay behind. 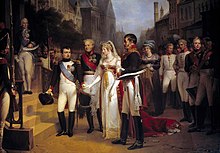 The Russian Emperor accepted the Confederation of the Rhine and the newly founded Duchy of Warsaw , which the King of Saxony was to rule in personal union, as Napoleonic vassals and joined the continental barrier. Furthermore, Russia agreed to the territorial halving of Prussia, but prevented the dissolution of the entire state favored by Napoleon.

The Ionian Islands and Cattaro , which were occupied by the Russian admirals Ushakov and Senjawin , came to France. In return, Napoleon guaranteed the sovereignty of the Duchy of Oldenburg and some other small principalities ruled by the Tsar's German relatives. The area around the city of Białystok (formerly part of the Province of New East Prussia ) came to Russia.

In a secret supplementary agreement, Emperor Alexander and Napoleon agreed to force Denmark-Norway, Sweden and Portugal to join the continental blockade. The British crackdown on neutrality in Denmark, which culminated in the siege and bombing of Copenhagen and the subsequent delivery of the Danish-Norwegian fleet to Great Britain, triggered the British-Russian War (1807-1812).

With French approval, Russia could now proceed against Sweden and end the wars it had started against Persia and the Ottoman Empire to its advantage: In the Russo-Swedish War (1808/1809) it forced Finland to cede and Sweden to join the continental blockade. In the Russo-Persian War (1804–1813) the Tsarist Empire conquered Georgia and large areas of the Caucasus . In the Russo-Turkish War (1806-1812) it secured large parts of the principalities of Wallachia and Moldova as well as Bessarabia .

Since 1810, Russia undermined the treaty by allowing neutral ships to unload British goods in its ports. Franco-Russian relations were now rapidly deteriorating. In April 1812 Russia, Great Britain and Sweden signed a secret treaty directed against Napoleon. After Napoleon's Russian campaign began on June 24, 1812 , Russia and Great Britain as well as Great Britain and Sweden (to end the Swedish-British War , 1810-1812) officially made peace on July 12, 1812 in Örebro .

Prussia (brown) after the Peace of Tilsit (loss of territory: blue); The Duchy of Warsaw and the Russian district around Białystok emerged from the eastern territories, and the city of Danzig became independent

While the Franco-Russian agreement of July 7, 1807 was still an agreement among equals, the treaty concluded with Prussia two days later had the character of a dictated peace . The territory of Prussia and the number of its subjects were reduced by more than half: from the previous area of ​​around 323,408 km², the Prussian territory was only 158,867, in which after the peace treaty only around 4.5 million inhabitants - from 9, 75 million - lived. The fortresses Kolberg , Graudenz , Neisse , Cosel , Pillau , Glatz and Silberberg , which were not conquered by France, remained free from French occupations. Furthermore, Prussia had to join the continental blockade against Great Britain .

The West Elbe territories were incorporated into the newly founded Kingdom of Westphalia , and the Cottbus district fell to Saxony . Queen Luise's petition to Napoleon has become famous , in which she begged him in vain to alleviate this loss of territory. From the areas annexed by Prussia during the Second and Third Partition of Poland , Napoleon formed the Duchy of Warsaw , with Danzig becoming the " Free City " with Oliva and Hela and Russia receiving the Białystok district . With the 2nd Elbingen Convention of November 10, 1807, Prussia also lost the district of Kulm , which had already been lost in July, the district of Michelau (Art. 2 of the Convention) and the part of "Lesser Poland" acquired in 1795 during the third partition of Poland, known as the district Czestochowa or " New Silesia " was named to the Duchy (Art. 7 of the Convention).

In the Königsberg follow-up agreement of July 12, 1807, France undertook to withdraw its troops from Prussia step by step in accordance with the compensation for the war contribution still to be determined. The amount was only set by Napoleon on September 8, 1808 in the Paris Convention. Prussia then had to pay a war contribution of 120 million francs (over 32 million Prussian Reichstaler ); French garrisons of a total of 10,000 men were to remain in the Oder fortresses until payment. The Prussian army, about 235,000 strong at the beginning of the war in 1806, had to be reduced to 42,000 men. The establishment or training of any kind of militia or military reserve was prohibited. France undertook to evacuate Prussia, with the exception of the fortresses, within 40 days. This ended the presence of French troops in cities and villages in Prussia in December 1808, but not in the fortresses of Stettin , Küstrin and Glogau .

The peace of Tilsit was a trigger for fundamental reforms in the Prussian state .