Glogau is a redirect to this article. Further meanings are listed under Glogau (disambiguation) .

Głogów [ˈgwɔguf] ? / i , German Glogau (also Groß-Glogau ), is a city in the Polish Voivodeship of Lower Silesia . Głogów is the district town of Powiat Głogowski ( Powiat Glogau ) and forms its own municipality. It is also the seat of Gmina Głogów , a rural community that includes the villages north and east of the city.

The city is located in the northern part of Lower Silesia , around 100 km northwest of the Lower Silesian capital Breslau (Wrocław) , on both sides of the Oder at 83 m above sea level. NHN , with the majority of the urban area concentrated on the left. The development of Glogau on the right bank exists only on the cathedral island. The old town center is on the left bank of the Oder, as are the copper smelters to the west of the town.

Glogau in the 17th century

In 1010 the city was first mentioned as urbs Glogua by Thietmar von Merseburg . 150 years later (1157), Duke Bolesław IV, the senior duke of Poland, had the city set on fire because he believed that he could not defend it against Emperor Frederick I Barbarossa . A Glogau collegiate school can be proven from 1233; it was one of the first schools in Silesia. From 1251 Glogau was the residence of the Duchy of Glogau . Two years later, Glogau, which then had over 2,000 inhabitants, received Magdeburg city rights . In 1331 Glogau fell together with the Duchy of Glogau as a fief to the Kingdom of Bohemia .

In 1484 the Sagan Duke Johann II had the Jews expelled from the city and in 1488 seven councilors imprisoned and starved to death. From 1499 to 1506 the city and duchy of Glogau were ruled by the later Polish King Sigismund I , who had received both as a fiefdom from his older brother, the Bohemian King Vladislav II .

In 1630 the construction of fortifications began; the number of inhabitants had fallen from approx. 22,000 to approx. 7,000 due to the destruction of the suburbs. During the Thirty Years War , the city was conquered by Protestants in 1632 and regained by the Counter - Reformation in 1633 . In 1642 the city was considered the main fortress of Silesia and was the location for a supply depot for Imperial Saxon troops. On May 4, 1642, the fortress and the warehouse with 95,000 bushels of grain were conquered and occupied by a Swedish army under Lennart Torstensson and Torsten Stålhandske . After that the Swedish armies advanced further inland and the battle of Schweidnitz broke out .

In the Prussian province of Silesia 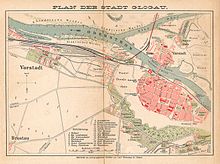 City map of Glogau shortly before 1900

In early March 1741, during the First Silesian War , Prussian troops stormed the fortress town of Glogau, which from then on belonged to the Kingdom of Prussia . During the war with France on December 3, 1806, Glogau fell into the hands of French troops, who kept it occupied even after the Peace of Tilsit . During the wars of liberation , around 9,000 French occupiers, plagued by cold temperatures of up to −26 degrees in winter, lack of food and desertions, defended the Glogau fortress against Prussian and Russian troops for fourteen months . On April 10, 1814, the 1,800 surviving occupiers under General Jean Grégoire Laplane surrendered to the besiegers.

Around 1900 Glogau had three Protestant and three Catholic churches (including the Gothic cathedral on an island in the Oder ), a synagogue , a royal castle, a state Catholic and a Protestant grammar school, a number of different manufacturing plants and was the seat of a regional court.

Ruins of the destroyed St. Nicholas Church in the old town of Glogau

Shortly before the end of the Second World War , Glogau was declared a fortress . The six-week siege of Glogau by the Red Army fell victim to over 90 percent of the buildings and the old town was in ruins. Glogau was placed under Polish administration by the Soviet occupying power in the summer of 1945 . Then began the immigration of Polish migrants, some of them from areas east of the Curzon Line , where they belonged to the Polish minority. The Poles introduced the place name Głogów for Glogau . In the following period, the local German population was expelled from Glogau by the local Polish administrative authority .

After 1945 the city developed in the outskirts; the ruined buildings in the old town were demolished. An upswing only followed with the construction of a copper smelter in 1967, which is still the largest industrial company today. The city center remained undeveloped until the 1980s, and since then the city center has also been rebuilt on the original foundations and in imitation of the old town houses.

At the head of the city administration is the city ​​president . Since 2014 this has been Rafael Rokaszewicz, who was previously the star of the Powiat Głogowski . He is a member of the left-wing SLD but has his own election committee. The regular election in October 2018 led to the following results:

Rokaszewicz was thus re-elected for a further term in the first ballot.

Flag of the city of Glogau

The Głogów station is located at the intersection of the Wrocław – Szczecin railway with the Łódź – Forst (Lausitz) railway, which is only operated here for goods traffic .

Parishes in the powiat Głogowski