This article is about the district town of Świdnica. For other places and rivers with this name, see Świdnica (disambiguation) .

Schweidnitz is a redirect to this article. Further meanings are listed under Schweidnitz (disambiguation) .

Świdnica ( ɕfʲiˈdɲiʦa ), German  Schweidnitz ( Czech Svídnice ), is a city in the Polish Voivodeship of Lower Silesia . From 1975 to 1998 the city belonged to the Wałbrzych Voivodeship (German Waldenburg). Świdnica is the county seat of the Powiat Świdnicki , forms its own municipality and is also the seat of the Gmina Świdnica , a rural municipality that includes the surrounding villages. Świdnica has been part of the Wałbrzych agglomeration since 2014 .

Since 1291 Schweidnitz was the residence of the Duchy of Schweidnitz . The Schweidnitzer Friedenskirche is the largest half-timbered church in Europe and has been a World Heritage Site since 2001 .

The city is located in Lower Silesia , around 50 kilometers southwest of Wroclaw in a fertile valley between the Zobten and the Owl Mountains on the Schweidnitzer Weistritz . Neighboring towns are Bolesławice and Wierzbna in the north, Krzyżowa and Grodziszcze in the southeast, Burkatów in the south, Waldenburg in the southwest and Świebodzice in the west. The 718 m high Zobtenberg rises to the east .

Schweidnitz under the Piasts

Świdnica was built as a resting place for merchants and carters on the newly built road along the Preseka . At the same time it took over the military tasks of the former Castellanei Gräditz , who u. a. the protection of the road leading through the Silesian valley to Bohemia was responsible. The founding of the city with Weichbild and mile law took place according to Neumarkt law . Schweidnitz is first documented as a town in 1243. In 1267 there was a hospital outside the wall ring , which was handed over in 1283 by Duke Heinrich IV to the Prague Cross Lords with the Red Star . The Vogt , first mentioned in 1274, carried out the low and high jurisdiction .

In 1290 Schweidnitz had its own right to mint and a mint . There is evidence of a department store on the ring for the year 1291, which also served as the town hall. The duke's castle, which was located in the northwest of the city, is recorded as a curia for 1295 and as a castrum for 1326 . Schweidnitz initially belonged to the Duchy of Breslau and from 1290/91 was next to the Fürstenstein seat of the independent Duchy of Schweidnitz .

Under the crown of Bohemia, which came to the Habsburgs in 1526

Together with the duchy, after the death of Duke Bolko II in 1368, it fell to the Roman-German and Bohemian King Wenceslaus , who was a son of Duchess Anna von Schweidnitz . However, until her death in 1392 , Bolkos II's widow Agnes von Habsburg had the usufruct of the now Bohemian hereditary principality of Schweidnitz-Jauer. This was administered by provincial governors and came to the Habsburgs in 1526 together with the Crown of Bohemia .

As early as the beginning of the 14th century, the city developed into a supra-regional trading center and a center of beer brewing. Schweidnitzer beer was u. a. Delivered to Prague, Thorn and Ofen and first served in 1332 in the Breslauer Ratskeller . From 1522 the Reformation spread in Schweidnitz. With the exception of the Nikolaikirche, all churches were handed over to the Evangelicals and all monasteries were dissolved. In terms of economic importance, Schweidnitz was in second place behind Wroclaw around 1550 and, with 5000 inhabitants, was almost as big as this. In 1580, Emperor Rudolf II, in his capacity as King of Bohemia, granted the city of Schweidnitz the privilege of free election to council. There was a decline in prosperity in the Thirty Years War . 1629–1654 the city had to spend more than 370,000 thalers on boarding the billeted soldiers. In 1642 the city was conquered by the Swedes under Lennart Torstensson . Of the 1,300 houses, only 118 are said to have been intact after the war and only 200 residents are left. This lost its economic importance. As a result of the targeted re-Catholicization from 1622/24 , the members of the Dominican and Franciscan orders were able to return to Schweidnitz. In 1664 the Jesuits erected a college building next to the parish church, which was given to them in 1637.

Under the crown of Prussia

Lithograph of the parish church, 1852

House from the early days on the corner of ul. Pułaskiego

After the First Silesian War , Schweidnitz came to Prussia in 1741 . Subsequently, King Friedrich II had the city expanded into a fortress, which consisted of an inner wall belt and the outer fort system. Nevertheless it was conquered several times by the Austrians during the Seven Years' War . From September 29th to November 12th, 1757 they besieged the fortress Schweidnitz under General Nádasdy . Already on December 15th. J. returned the Prussians. The Prussian General von Treskow was able to accept the Austrian surrender on April 16, 1758. On the night of October 1, 1761, the Austrian general von Laudon attacked Schweidnitz. He was able to capture the commanding General Leopold von Zastrow and capture 357 guns. General von Tauentzien was commissioned with the reconquest . The siege made possible by the Prussian victory in the Battle of Burkersdorf on July 21, 1762 began a good two weeks later, on August 7. The Austrian general Franz Guasco surrendered on October 9th. J. After that, Schweidnitz finally fell to Prussia and was significantly reinforced by four detached forts . In 1793 the municipal jurisdiction was abolished and Schweidnitz was the seat of a local and regional court.

During the Fourth Coalition War on February 16, 1807, the Schweidnitz fortress surrendered to the French, who began to demolish the fortifications. Due to the secularization ordered in Prussia in 1810 , the Dominican, Franciscan and Capuchin monasteries were dissolved and the monastery property was given to secular purposes or torn down. Only the monastery and the monastery church of the Ursuline nuns, who came from Breslau to Schwednitz in 1700 and received a monastery from Count Schaffgotsch in 1712 , were spared, as they maintained a lyceum for public instruction for girls (the monastery existed until 1945).

After the reorganization of Prussia , Schweidnitz belonged to the province of Silesia from 1815 and was the seat of the district of Schweidnitz from 1816 . In 1844, Schweidnitz was connected to the Breslau – Waldenburg railway line with the branch line to Königszelt . The city was subsequently industrialized. Companies in the machine, electrical and radio industries as well as furniture and toy factories emerged. The well-known organ building company Schlag & Söhne built the organ of the old Berlin Philharmonic in 1888 . Instead of the fortifications that had already been razed in 1867, promenades and green spaces were built so that the city could expand significantly. In 1851 Gustav Glubrecht became mayor and in 1856 lord mayor of the city.

From April 1, 1899, Schweidnitz formed its own urban district , but remained the seat of the district of the same name. In 1907 Bernhard Kaewel became mayor and in 1908 lord mayor of Schweidnitz. On October 1, 1938, the urban area was enlarged by incorporating parts of the communities of Kroischwitz, Nieder-Bögendorf and Schönbrunn from the district of Schweidnitz. In 1939 39,000 inhabitants were counted.

From the post-war period to the 2010s

Restored residential and commercial buildings on the Ring (2013)

After the end of the Second World War , Schweidnitz, which had hardly been destroyed, was placed under the administration of the People's Republic of Poland by the Soviet Union in 1945 . Schweidnitz received the Polish name Świdnica. In the years 1945 to 1947, the city experienced an exchange of population through the expulsion of the locals and settlement with Poles . About a quarter of Poles were repatriates from areas east of the Curzon Line that had fallen to the Soviet Union . From 1975 to 1998 the city belonged to the Wałbrzych Voivodeship (Waldenburg), since 1999 it has been part of the Lower Silesian Voivodeship .

After the political change in 1989, the electrical industry in particular gained economic importance . There are also companies for scaffolding and climbing technology, furniture manufacturing, leather processing, printing and the textile industry . After 1990, foreign investors also set up suppliers for the automotive industry in Świdnica (car electrics, upholstery fabrics).

On March 25, 2004 Świdnica became the seat of the newly founded Diocese of Świdnica , which is subordinate to the Archdiocese of Wroclaw as a suffragan .

Blazon: square, in the first and fourth black fields a gold crown, in the second in silver a red griffin, in the third in silver a black boar leaping to the left.

Until 1492 Schweidnitz had two city ​​coats of arms . The red griffin , known since 1284, was an old city ​​seal image . The black boar has been used on lay judges' seals since 1335 . It alludes to the place name. Both were considered equal. At the request of the city of Schweidnitz, King Vladislav II of Bohemia allowed on November 29, 1492 to add a crown to the coat of arms. Thereupon the Schweidnitzer united both coats of arms with the crown to the today known city coat of arms.

The Świdnica Miasto Station (Swidnica city) , the former main railway station, situated on the railway line Katowice-Legnica (Katowice - Legnica) . In the south of the city this crossed with the railway line Wrocław – Jedlina-Zdrój (Breslau - Bad Charlottenbrunn) , which is only a freight connection to the north, but to the south, like the Świdnica Kraszowice crossing station itself, is closed. There is a connecting curve from the Świdnica Przedmieście station on the route in the direction of Wrocław to the Świdnica Miasto station.

The Friedenskirche is considered the largest half-timbered church in Europe. 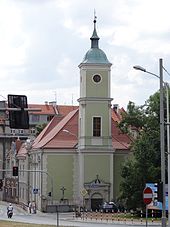 Towns and municipalities in the powiat Świdnicki