Manfred Kanther, excerpt from an election poster from the late 1990s

Manfred Kanther (* 26. May 1939 in Swidnica , province of Silesia ) was a German politician of the CDU . From 1970 to 1987 he was state manager and general secretary of the CDU Hessen, from 1991 to January 1998 its state chairman and from 1993 to 1998 Federal Minister of the Interior in the Kohl IV and V cabinet . He resigned his parliamentary mandate at the beginning of 2000 in connection with the donation affair of the Hessian CDU .

After their flight and expulsion from Lower Silesia , Kanther's family lived in Thuringia . Kanther passed his Abitur in 1957 , but fled the GDR because he was refused a university course. In 1958 he began studying law in Marburg and Bonn , which he completed in 1962 with the first state examination . After the legal clerkship in Lüdenscheid , the second state examination followed in 1966 . During his studies he was active in the Corps Guestphalia et Suevoborussia Marburg, to which he now belongs as an old man . From 1967 to 1970 he was the mayor of Plettenberg . Since leaving politics, Kanther has been working as a lawyer in Wiesbaden-Biebrich and lives in Wiesbaden-Hessloch .

Manfred Kanther has been married to his wife Barbara for more than 50 years and has six children.

Since 1958 he has been a member of the Christian Democratic Union of Germany. In 1970 he was appointed by Alfred Dregger as the state manager of the CDU Hesse , from 1980 to 1987 he was general secretary and from 1991 to January 1998 state chairman of the Hessian CDU. From 1992 to November 1998 he was also a member of the presidium of the CDU in Germany.

From 1974 to July 12, 1993 Kanther was a member of the state parliament of Hesse . He was elected in the Wiesbaden I constituency. Here he was parliamentary managing director of the CDU parliamentary group until 1987 and its chairman from 1991 to 1993 - until he was appointed Federal Minister of the Interior .

From 1994 to January 25, 2000 he was a member of the German Bundestag . Manfred Kanther was directly elected member of the Bundestag constituency of Hanau in 1994 and entered the Bundestag in 1998 via the Hesse state list . He gave up this mandate in January 2000 because of allegations in connection with the donation affair of the Hessian CDU .

Candidate for Prime Minister of Hesse 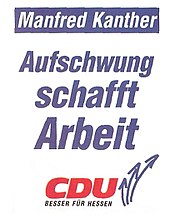 Election poster of the CDU Hessen 1995

In the election campaign for the state elections in Hesse in 1995, the CDU relied on Kanther and clear, concise statements. As Federal Minister of the Interior, Kanther had earned the reputation of a consistent conservative. The main topics of the election campaign (in addition to school policy) were therefore the “hard” topics of crime and the economy. After the successful elections to the European Parliament on June 12, 1994 (in which the Union had become the strongest party with 37 percent) and the 1994 federal election (in which the CDU had achieved 40.7 percent), it was hoped that the state elections would regain a government majority to reach. Although the CDU was the strongest parliamentary group with 39.2 percent (−1.0), the losses of the SPD were more than compensated for by gains by the Greens, so that the CDU remained in the opposition for another four years. Roland Koch became the new leader of the parliamentary group and opposition leader .

In the Hessian state government ( Wallmann cabinet ) led by Prime Minister Walter Wallmann , he served as Hessian finance minister from April 5, 1987 to April 4, 1991 . On July 7, 1993, he was then as Minister of the Interior in by Chancellor Helmut Kohl led government appointed. During his time as Federal Interior Minister in the Kohl IV / V cabinet, Kanther was always known as the “ Law and Order ” minister.

Involvement in the CDU donation affair and conviction

In the year 2000, in connection with the donation affair of the Hessian CDU, Kanther was accused of having violated the party donation law by secretly transferring black money of 20.8 million DM (10.6 million euros) as Secretary General of the Hessian CDU in 1983 Switzerland and then to Liechtenstein.

He therefore resigned from the Bundestag on January 25, 2000. Kanther said in the trial (2004) that he had not personally enriched himself, but wanted to support his party.

As a result, on April 18, 2005, Manfred Kanther was sentenced in the first instance by the Wiesbaden district court to a prison sentence of 18 months on probation because Kanther was guilty of infidelity in accordance with Section 266 of the Criminal Code . The Federal Court of Justice partially overturned the judgment of the Wiesbaden Regional Court in its judgment of October 18, 2006 and referred the proceedings back to the Wiesbaden Regional Court to the extent that it was annulled. The Wiesbaden Regional Court rightly assumed that the transfer of the party funds to Swiss accounts in 1983, their transfer to the assets of the Wren Foundation and their ongoing concealment from the CDU Hessen constituted infidelity to the detriment of the Landesverband Hessen, which only began with the The repatriation of the funds had ended in 2000. However, his conviction is not legally tenable because of his involvement in false statements of account by the Hessian CDU. On this point, Kanther was not to be accused of deliberate damage to his party's assets, because although he recognized the risk of reclaims, he wanted to avoid its realization. However, this situation could constitute fraud (Section 263 StGB) to the detriment of the Federal Republic of Germany. This was not checked in the lower court for criminal procedural reasons.

Interior Minister of the Federal Republic of Germany

See also : List of German interior and building ministers  and the Federal Ministry of the Interior, for Building and Home

Finance Minister of the State of Hesse

State chairwoman of the CDU Hessen

Chair of the CDU parliamentary group in the Hessian state parliament