This article describes the former politician. For the entertainer see Günther Krause (Conferencier) . 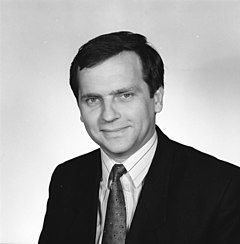 Günther Krause (born September 13, 1953 in Halle (Saale) ) is an engineer and former German politician ( CDU ). In 1990 he was Parliamentary State Secretary to the Prime Minister of the GDR and, with Wolfgang Schäuble, negotiator on the German-German Unification Treaty , from 1990 to 1991 Federal Minister for Special Tasks and from 1991 to his resignation in 1993 Federal Minister of Transport .

After graduating from high school in 1972, Günther Krause did his military service with the NVA and then graduated from 1974 to 1978 with a degree in computer engineering and data processing at the Weimar University of Applied Sciences , which he completed as a graduate engineer. From 1978 to 1982 he worked at the housing association in Rostock . From 1982 to 1990 he worked at the engineering college in Wismar . In 1984 he received his doctorate in engineering. at the Hochschule für Architektur und Bauwesen in Weimar with the work A contribution to the automated project planning in wall construction and in 1987 his habilitation for Dr. sc. techn. in Wismar with the work A uniform CAM / CAP development technology - the prerequisite for the decentralized use of microcomputing technology in the shipping industry .

In 1990 Krause was appointed honorary professor at the Technical University of Wismar . Since 1993 he has been running a company for heating billing in Eastern Europe as an independent entrepreneur. In 1994 he acquired 50% of Bank Companie Nord and took over the chairmanship of its supervisory board . Also in 1994 he was briefly on the Supervisory Board of IG Farbenindustrie AG i. A. Günther Krause was managing director of the management consultancy IBP GmbH, from 2008 a branch, from 2013 head office in Kirchmöser. This wanted to produce combustion oil from waste. In June 2016, the Potsdam District Court initiated insolvency proceedings against the company's assets.

Krause is chairman of the scientific advisory board of Neutrino Deutschland GmbH, a company that claims to generate electrical energy from neutrinos with coated metals , although the "generation of direct current from solar energy, especially neutrino radiation, contradicts the current physical laws" and thus contradicts the current state of research.

In January 2020 he was a candidate in the 14th season of the RTL show Ich bin ein Star - Get me out of here! to see - but dropped out after the first day due to health problems.

Krause has three children and four grandchildren and has been married to Heike Krause-Augustin for the second time since April 2004. He initially lived in Börgerende-Rethwisch . From 2008 he lived with a secondary residence and from 2013 to 2017 with his main residence in Brandenburg - Kirchmöser . From 2017 to 2018 he lived in Fincken-Knüppeldamm . Krause has lived in Werder (Havel) since 2018 .

Krause joined the GDR CDU in 1975 , a block party in the GDR. From 1987 to 1989 he was CDU district chairman in the Bad Doberan district . In March 1990 he was elected chairman of the newly founded state association of the CDU in Mecklenburg-Western Pomerania . He held this position until his resignation in 1993. His successor was Angela Merkel . Günther Krause was a member of this parliament from the first free election of the Volkskammer on March 18, 1990 until reunification . From April 10, 1990, he acted as chairman of the CDU / DA parliamentary group. A few days before October 3 , Krause made sure that reporters were sent out of the room when members of parliament were considering naming members of the State Security (Stasi) and asked them beforehand to delete the recording: “If you don't make, I'll sue you ”. On October 3, 1990, he became a member of the German Bundestag . In the federal election in 1990 he was directly elected member of the constituency of Wismar / Doberan with 45.2% of the vote . In the 1994 federal election , Krause did not run and left the Bundestag. He ran again for the 1998 general election, but was defeated by his SPD competitor Dirk Manzewski .

From mid-April to October 2, 1990, he was Parliamentary State Secretary for the Prime Minister of the GDR , Lothar de Maizière . In this function, he was also negotiator on the East German side from July 6, 1990 during the talks on the German-German unification treaty and signed it on August 31, 1990 together with Wolfgang Schäuble . Günther Krause took a differentiated position on the question of ownership. On the one hand, he wanted to ensure that the agricultural land from the land reform , insofar as it had become the private property of GDR citizens (also through inheritance), could not be taken away again. He and the GDR government were particularly concerned with securing 40 years of GDR citizens' home rights and protecting the property they had acquired. In his opinion, the protection of those GDR citizens who had appropriated property through purchase or their privileged function should definitely have priority. That is why he worked to ensure that the industrial and land reform 1945-1949 cannot be reversed. During this time, over 10,000 companies had been expropriated and many entrepreneurs fled to the western zones afterwards. Krause advocated that the Joint Government Declaration of June 15, 1990 talked about compensation instead of return. Wolfgang Schäuble modified this and replaced the word compensation with the word compensation . Krause made a significant contribution to the fact that the contract could be negotiated in seven weeks. This was the prerequisite for completing the reunification in a short time. There were also voices who wanted to join immediately in accordance with Article 23 of the Basic Law , without a separate unification agreement (application by the DSU ) and voices in favor of a significantly slowed down accession.

After reunification on October 3, 1990, he was appointed Federal Minister for Special Tasks in the Federal Government led by Federal Chancellor Helmut Kohl . After the federal election in 1990 he was appointed Federal Minister of Transport on January 18, 1991 . In this role he made a significant contribution to the fact that there were shortened planning procedures in East Germany, e.g. B. the construction of the Baltic Sea motorway A20 in Mecklenburg-Western Pomerania could be completed in a relatively short time. After the resignation of the then Federal Post Minister Christian Schwarz-Schilling , he was commissioned by Federal Chancellor Helmut Kohl on December 17, 1992 with the provisional management of the Federal Ministry of Post and Telecommunications, which he took over until a successor was appointed on January 25, 1993. In the Bundestag he campaigned for reparation for the expropriations from 1945-49 . Together with his colleagues Hans H. Gattermann (FDP), Rupert Scholz (CDU) and Wilhelm Rawe (CDU), he developed the “Compensation Certificate Model” legislative initiative. According to this, if the property levy no longer applies, compensation should be paid in real assets up to 2003 on the basis of fictitious market values ​​as of October 3, 1990, then in cash in fractions of the market value. The compensation certificate model was read in the Bundestag, then passed on to the finance committee, where it was rejected or changed in the mediation committee. This concept was not approved in particular because the timely redemption of the compensation certificates would have placed an immediate burden on the federal budget. In addition, the new federal states were of the opinion that the coupon model led to an unjustified preference for previous owners.

Krause ran for the office of Lord Mayor of Rostock in 1995 , but was defeated by the SPD candidate Arno Pöker .

On January 10th and October 28th, 1999 Günther Krause made two affidavits. In the first affidavit he opposed the assertion that the Soviet Union had made it a condition for its consent to German reunification that the assets that had been expropriated in the German eastern zone during the Soviet occupation (1945 to 1949) would not be returned allowed to. He confirmed that the Soviet Union by no means insisted on such a regulation, but rather viewed it as an "internal German" issue. In the second affidavit he protested against the interpretation of his first statement by the Federal Administrative Court without hearing him. With this assessment, he confirmed statements by Mikhail Gorbachev of March 1, 1998 and Foreign Minister Eduard Shevardnadze .

On May 6, 1993, Krause resigned from his position as Minister of Transport, soon afterwards from chairing the CDU in Mecklenburg-Western Pomerania. The reason was several events that were treated as affairs in public:

Krause had to take an oath of disclosure in 2001 . In the review process surrounding the multi-million dollar bankruptcy of his company Aufbau Invest on March 24, 2009, he was sentenced by the Federal Court of Justice (BGH) to a prison sentence of fourteen months on probation for fraud and the delay in bankruptcy. He was charged with the delay in bankruptcy, breach of trust, fraud and tax evasion. In 25 of 27 allegations he was acquitted or the allegations were discontinued due to the statute of limitations. The Rostock regional court even sentenced him to three years and nine months in prison on December 23, 2002 (without parole). This judgment was overturned on July 7, 2004 by the BGH and referred back to the Rostock regional court. This ruled again on October 30, 2007 in the second instance. This was followed by the above-mentioned softened final conviction.