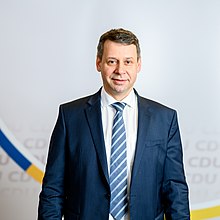 Michael Sack (born August 9, 1973 in Demmin ) is a German politician ( CDU ) and district administrator in the Vorpommern-Greifswald district . From August 7, 2020 to September 27, 2021, he was state chairman of the CDU Mecklenburg-Western Pomerania and was the top candidate of his party in the state elections in 2021 .

Michael Sack grew up in Groß Toitin near Jarmen . After an apprenticeship as a draftsman , he completed a degree in civil engineering . Until 2010 he worked as a vocational school teacher.

In 2010 Michael Sack was elected mayor of the city of Loitz and also took over the administration of the Peenetal / Loitz office . In the following year he was elected district council president of the district of Vorpommern-Greifswald, which was newly created in the course of the Mecklenburg-Western Pomerania district reform in 2011 . In the 2017 mayoral election in Loitz, he was re-elected with 94 percent of the vote and a turnout of 54.92 percent.

In December 2017, the CDU district association Vorpommern-Greifswald nominated him as a candidate for the district election 2018. In the election on May 27, 2018 Michael Sack received the most votes with 41.5 percent (26,675 votes) in front of the AfD candidate , Axel Gerold , who achieved 15.7 percent (10,078 votes), and the individual applicant Dirk Scheer with 15.1 percent (9,703 votes). The candidates from the SPD and the Greens received 12.5 percent and 11.4 percent of the vote, respectively. The turnout was 32.3 percent. In the required runoff on June 10, 2018, Michael Sack prevailed with 79.5 percent (38,844 votes) against Axel Gerold, who achieved 20.5 percent (10,002 votes), with a turnout of 24.6 percent. Michael Sack took up his post as district administrator in October 2018. On June 19, 2020 - after Philipp Amthor's withdrawal from the candidacy for the state chairmanship of the CDU Mecklenburg-Western Pomerania - it was announced that Sack would run in his place. At a special party conference in Güstrow on August 7, 2020, Sack was elected state chairman with 94.8% of the vote. After the CDU Mecklenburg-Western Pomerania did poorly in the state elections in 2021, Sack resigned from his post as state chairman on September 27, 2021 one day after the election and renounced his state parliament mandate.

Michael Sack is married and has three children.

Federal Executive Board of the CDU in Germany