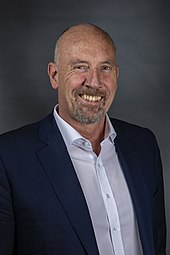 Carsten Meyer-Heder (born March 30, 1961 in Bremen ) is a German politician ( CDU ) and IT entrepreneur . In the 2019 mayor elections in the Hanseatic city of Bremen , he ran as the top candidate of the CDU Bremen for the office of Mayor of Bremen and, with the Christian Democrats, replaced the SPD as the strongest parliamentary group for the first time. He has been the state chairman of his party since 2019.
He was previously the managing director of team neusta .

Meyer-Heder said he was a hippie with long hair in the 1970s , lived in a ten-person shared apartment and was a conscientious objector and opponent of capitalism . In 1979 Meyer-Heder completed his school education with the Abitur at the Im Holter Feld school center in the Hemelingen district of Bremen . After completing his community service with the German Red Cross , Meyer-Heder began studying economics at the University of Bremen in 1982 , which he finished in 1986 without a degree. During his student days he only made four bills .

He completed a retraining to the beginning of the 1990s, software developers .

Meyer-Heder joined Neusta GmbH, which was founded in the previous year, in 1993 and took over sole management of the company. After initially running the business as a sole proprietorship, the team neusta group of companies founded by Meyer-Heder emerged in the following years . In 2014, Meyer-Heder was named Bremen Entrepreneur of the Year by the Bremen State Association of The Family Entrepreneurs and The Young Entrepreneurs .

Before he got into state politics, he explained that he had already started arranging his successor at team neusta. After moving into the citizenry, he continues to be the managing director of the holding company and managing partner.

In January 2018, the CDU state chairman Jörg Kastendiek submitted a letter to the state board of the CDU Bremen, proposing Carsten Meyer-Heder as the top candidate for the 2019 mayor election and thus as the challenger to the previous mayor Carsten Sieling (SPD). Thereupon the CDU state executive decided unanimously to officially recommend Meyer-Heder as the top candidate at the state party conference. Meyer-Heder became a CDU member in March 2018.

In May 2018, Meyer-Heder was elected the top candidate of the Bremen CDU for the 2019 general election with 198 of 201 votes. At the delegates' meeting on October 27, 2018, he was unanimously elected to first place on the CDU list for the state election. Meyer-Heder succeeded in moving into Bremen as a member of the Bremen parliament with 104,589 votes in the 2019 general election . Overall, with Meyer-Heder as the top candidate, the CDU achieved 26.7 percent of the votes in the state election, replacing the SPD as the strongest parliamentary group for the first time in the country's history.

Following the 2019 general election, Meyer-Heder held exploratory talks with the Greens and the FDP about a Jamaica coalition . Because the Greens then decided in favor of a red-green-red coalition, Meyer-Heder's mandate in the citizenry began in the opposition. On June 27, 2019, Meyer-Heder was elected as the successor to the late Jörg Kastendiek as the new state chairman at the state party conference of the CDU Bremen with a majority of 98 percent .

State chairwoman of the CDU Bremen