This article describes the German politician (CDU). For the police officer of the same name, see Michael Kretschmer (police officer) .

Michael Kretschmer [ ˈkʁeːt͡ʃmɐ ] (born May 7, 1975 in Görlitz ) is a German politician ( CDU ) and since December 13, 2017 Prime Minister of the Free State of Saxony . Since 2019 he has been a member of the Saxon state parliament as a directly elected member of the constituency of Görlitz 2 .

Kretschmer grew up in Görlitz-Weinhübel. After completing secondary school in 1991 at the Erich Weinert High School in Görlitz, Kretschmer trained as an office information electronics technician until 1995 . In 1998 he acquired the technical college entrance qualification on the second educational path and then completed a degree in industrial engineering at the University of Technology and Economics in Dresden , which he graduated in 2002 with a degree in industrial engineering (FH). 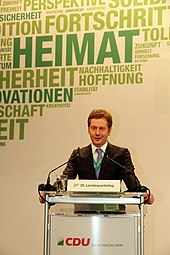 Kretschmer joined the Christian Democratic Youth in 1989 and was a member of the state executive committee of the Young Union of Saxony and Lower Silesia from 1993 to 2002 , where he was state treasurer of the JU from 1995 to 2001 . From 1994 to 2000 he was deputy chairman of the CDU district association Görlitz and has been a member of the CDU state executive in Saxony since 2003. On April 23, 2005, he was elected General Secretary of the Saxon CDU and subsequently confirmed in office several times. At the state party conference on December 9, 2017, Kretschmer was elected as the new state chairman with 90.1% of the delegate's votes, and Alexander Dierks became the new general secretary .

At the beginning of 2010, Kretschmer was the mastermind behind the sponsorship affair of the Saxon CDU, in which companies paid for contacts with Prime Minister Stanislaw Tillich as well as the express willingness to be mentioned in a welcoming speech by Kretschmer. Kretschmer had sent offers with a tiered price list to companies. According to this, an advertising photo could be made with the CDU state chairman and prime minister Tillich from 1900 euros and a conversation could be held with him for 3900 to 8000 euros. This met with criticism from the parliamentary opposition and from legal and political scientists who spoke of the borderline to corruption.

For the state elections in Saxony in 2019 , Kretschmer was nominated by the CDU district association of Görlitz as a direct candidate in the constituency of Görlitz 2 . He won in this constituency with 45.8 percent of the direct vote.

On October 18, 2017, he was proposed by Stanislaw Tillich as his successor in the office of Saxon Prime Minister . He was elected to office by the Saxon state parliament on December 13, 2017 with 69 out of 126 votes and then sworn in.

Kretschmer wants to equip every student with a tablet computer and calls for more computer rooms, as well as a "natural integration" of the topic in the classroom. A program he represents promises to make Germany “by the end of the decade the number one digital growth country.” Sectors of the economy that Kretschmer believes should be particularly promoted include big data applications and cloud computing .

Kretschmer sees no need for action by the legislature in the areas of civil rights and net neutrality . In his opinion, the existing regulations are sufficient. In this context, he declared in mid-2013: "We are capable of acting."

After a YouTube video showing the shooting of an apparently mentally confused man by a police officer in Berlin was shared particularly frequently on Facebook in June 2013 , Kretschmer criticized the social network. In this context, he explained: "If there is something where Facebook has to react immediately so that the pictures are taken off the Internet, then these are the cases" and described the pictures to the news magazine Focus as "inhuman". Such a thing should not be posted.

On September 30, 2016, Kretschmer presented together with the Saxon state parliament president Matthias Rößler as well as the CSU members Markus Blume , Reinhold Bocklet and Johannes Singhammer a “call for a leading and framework culture”. The controversial term “ Leitkultur ” is referred to as a “connecting framework culture”. In socially troubled times, people needed orientation, which they would find in terms such as “ home and patriotism ” as well as in the “leading culture”. Specifically, the use of the German language, established manners, mutual respect, the spiritual tradition of the Enlightenment and Germany's national symbols such as the flag and the anthem were mentioned . The appeal was motivated, among other things, by the success of the right-wing populist party Alternative for Germany in the state elections in 2016.

In the discussion about same-sex marriage , Kretschmer campaigned for the exclusivity of traditional marriage between men and women and against the right of adoption for homosexuals.

In an interview in March 2018, Kretschmer stated that there was “objectively a problem with integration”. There are "problems with people who do not want to adhere to our values ​​and laws". Better handling is needed, especially with minors. There is a new phenomenon of crime. Deportations did not work because refugees would conceal their identities. He spoke out in favor of "acting courageously in this situation" in order to remove many irritations.

In June 2019, Kretschmer, who was at the Petersburg Economic Forum with Peter Altmaier and Manuela Schwesig , met with Vladimir Putin . He had previously called for the international sanctions to be ended without the sanction reason, the violation of the territorial integrity of Ukraine, ceasing to apply.

Coalition statements and orientation of the CDU

Martin Dulig (l.), Michael Kretschmer (m.) And Jörg Urban (r.) At the election evening for the state elections in Saxony 2019

Before the state elections in Saxony in 2019 , Kretschmer expressly excluded coalitions and other forms of cooperation in parliament with the AfD and the Left Party for the CDU Saxony . In addition, Kretschmer sharply criticized Hans-Georg Maassen's remarks on the riots in Chemnitz in 2018 and was pleased that Maassen withdrew from the election campaign of the Saxon Christian Democrats as a CDU member after this criticism.

Michael Kretschmer lives in Dresden-Klotzsche and in Waltersdorf near Zittau . He is of Protestant denomination and has been married to Annett Hofmann, the former MDR journalist and former spokeswoman for the Saxon State Ministry for Social Affairs and Consumer Protection, since July 24, 2020 . The couple have two sons together.

Cabinet of the Free State of Saxony

Saxony between the Third Reich and the GDR: Rudolf Friedrichs  | Max Seydewitz

State chairwoman of the CDU Saxony