State Chancellery from the old town bank of the Elbe

The historic building of the Saxon State Chancellery 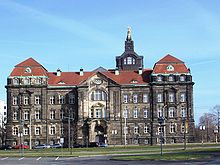 View from the Treasury

North side with fountain

The Saxon State Chancellery (SK) is a supreme state authority of the Free State of Saxony and the official seat of the Saxon Prime Minister . It has existed as a ministry in the state capital of Dresden since 1995 . From 1919 to 1945 there was also a state chancellery . The building is located in Dresden's government district in the Inner Neustadt .

The State is divided into four sections , which in turn into numerous papers divide.

Duties of the State Chancellery

As part of the countersignature of the Prime Minister, it examines the constitutionality of laws that have been passed. The State Chancellery deals with fundamental questions about the Saxon state territory and its division. In addition, she coordinates Saxony's relations with the federal government and the other German federal states as well as international relations and cross-border cooperation with neighboring countries, including support for the work of the euroregions and the EU funding program Interreg  III. It also coordinates the work of the Saxon state government in federal matters and represents the Free State of Saxony at the federal level . She is in constant contact with the Saxon state parliament .

Minister of State (Head of the State Chancellery)

The current head of the State Chancellery and Minister of State for Federal and European Affairs is Oliver Schenk ( CDU ), a position he has held since Michael Kretschmer took office as Prime Minister in December 2017.

Before that, the following people were ministers of state:

The State Chancellery was built between 1900 and 1904 as a joint ministerial building in the neo-renaissance style on the Neustädter Elbe bank between Carolabrücke and Albertbrücke for the royal Saxon ministries of the interior, justice and the ministry of culture and public education . The building, designed by Edmund Waldow (Head of State Building Construction) and under the direction of the architect Heinrich Tscharmann , was partially destroyed in 1945 during the bombing of Dresden . After reconstruction in the 1950s, it was the seat of the Dresden District Council until 1990 . The building was renovated between 1990 and 1994, and in 1992 the dove of peace on the roof was exchanged for a crown based on the original. Since 1990 the building has been the seat of the Saxon State Government and the Saxon State Chancellery.

State Ministries of the Free State of Saxony

State and Senate Chancelleries in the Federal Republic of Germany