Michael Müller (born December 9, 1964 in West Berlin ) is a German politician ( SPD ). He has been the Governing Mayor of Berlin since 2014 . From November 2017 to October 2018 he was the rotating President of the Federal Council and from November 2018 to October 2019 First Vice-President. 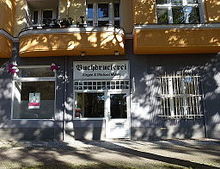 Müller was born in Berlin in the Tempelhof district and graduated from secondary school in 1982 . From 1983 to 1986 he completed commercial training as an office clerk (IHK) . After his training, he worked as a freelance printer in the family business with his father Jürgen Müller until 2011 . The late father ran a small print shop in Neu-Tempelhof .

Müller is a member of the Workers' Welfare Association and the Evangelical Church in Berlin-Brandenburg-Silesian Upper Lusatia . He has been married to his wife Claudia since 1993 and has two grown children. The couple separated in August 2019.

Müller has been a member of the Social Democratic Party of Germany since 1981. From 1989 to 1996 he was a member of the District Assembly (BVV) Tempelhof, most recently as parliamentary group chairman. From 2000 to 2004 he was district chairman of the SPD Tempelhof-Schöneberg .

He has been a member of the Berlin House of Representatives since 1996 and has been a directly elected member of the Tempelhof-Schöneberg constituency since 2001 . From June 2001 to November 2011 he was chairman of the SPD parliamentary group. He succeeded Klaus Wowereit in office after his election as governing mayor on June 16, 2001. After Peter Strieder resigned in April 2004, he also became chairman of the SPD Berlin . On June 9, 2012, he was defeated in a battle vote for the office of state chairman with 101 delegate votes against the SPD left Jan Stöß , who received 123 votes. Müller was considered a close confidante of Wowereits.

On December 1, 2011, he was sworn in as Senator for Urban Development and the Environment in Senate Wowereit IV . Since then he has also been mayor and thus one of the two deputies of the governing mayor. As his successor in the office of Senator for Urban Development and the Environment, Lichtenberg's District Mayor Andreas Geisel took office on December 11, 2014 , and Labor Senator Dilek Kolat became his successor as Mayor .

On August 29, 2014, Müller confirmed his candidacy to succeed Klaus Wowereit, who on August 26, 2014 announced his resignation on December 11, 2014. In a ballot of the Berlin SPD on October 18, 2014, Müller prevailed against the SPD state chairman Jan Stöß and the parliamentary group leader in the House of Representatives, Raed Saleh , with an absolute majority. He received 59.11% of the vote. On December 11, 2014, Müller was elected Governing Mayor of Berlin by 87 votes to 58, with one abstention .

In August 2020, Müller announced that he wanted to run for the 2021 federal election in the Berlin-Charlottenburg - Wilmersdorf constituency . He competes against Sawsan Chebli in the party primary . He decided not to run in his home constituency of Berlin-Tempelhof - Schöneberg because Kevin Kühnert had already announced a candidacy there.

Almost three months after the terrorist attack on Breitscheidplatz , Müller took part in an interreligious peace demonstration taking place at this location on March 16, 2017 . This event was initiated by the Neukölln meeting place as well as the Intercultural Center for Dialogue and Education, the Islamic Education and Cultural Center IKEZ and the Teiba Cultural Center. The last three organizations are monitored by the Office for the Protection of the Constitution for Islamist activities . The Central Council of Jews in Germany had advised Müller against participating. As a reaction to Müller's appearance, Berlin ex-MP Erol Özkaraca resigned from the SPD.

In 2019, Müller's meeting with Tehran's mayor Pirouz Hanachi , who is close to the Iranian Revolutionary Guard and who is said to have called for the destruction of Israel on Al Quds Day of the same year, was criticized .

According to research by Deutsche Umwelthilfe , the real CO 2 emissions from Müller's armored company car ( Mercedes-Benz S-Guard 600 Limousine ) were 408 g / km, higher than that of all heads of government in the German states.

Despite the warning of experts due to the already strong spreading COVID-19 pandemic Müller wanted the implementation of the still 14 March 2020 Bundesliga -Spiels of FC Union Berlin against Bayern Munich approve before 22,000 spectators. This behavior met with great incomprehension in the press.

Berlin Senators for Science since 1963

Acting ministers of education , culture and science in the German states