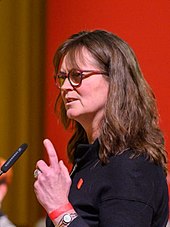 Juliane Kleemann (* 1970 in Sangerhausen , nee Rau ) is a German Protestant pastor and has been one of the two chairmen of the Saxony-Anhalt state association of the SPD since January 24, 2020 .

Juliane Kleemann studied Protestant theology in Halle and Bochum. She completed her vicariate from 1997–1999 in Halle (Saale) , then until 2003 she was pastor in Löbejün . From 2003 to 2009 she worked as a personal advisor to Bishop Axel Noack ( Evangelical Church of the Church Province of Saxony ) in Magdeburg . In addition, she completed an apprenticeship as a community advisor / organizational developer at the Institute for Personnel Consulting , Organizational Development and Supervision ( IPOS ) of the Evangelical Church in Hesse and Nassau . From December 2009 to December 2018 she was theological consultant at the Center Mission in the Region ( ZMiR ) of the EKD . Since January 2019 she has been theological advisor at the Evangelical Office for Missionary Church Development and Diaconal Profile Building . She is married to the superintendent of the Stendal church district, Michael Kleemann.

Kleemann joined the SPD in 2014. In 2016, Kleemann ran in Stendal for a state parliament mandate in Saxony-Anhalt. Although it only landed in third place, the 20.4% of the first votes are still considerable, as the SPD only received 11.8% of the second votes in its constituency in the same election. Since the local elections in Saxony-Anhalt in 2019 , Kleemann has been a member of the SPD in the district council of the Stendal district .

In 2019, Kleemann won the primary election for party chairman of the SPD state association Saxony-Anhalt with 46.6% just against Katharina Zacharias (45.1%). The state party conference on January 24, 2020 then elected her with 89.9% as chairperson alongside Andreas Schmidt . This is the first time that the SPD in Saxony-Anhalt has a dual leadership.

State chairwoman of the SPD Saxony-Anhalt