The title of this article is ambiguous. Further meanings are listed under Pastor (disambiguation) . 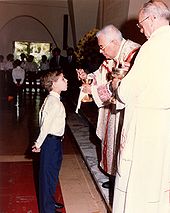 Pastor is a term used in Christian communities for a person who is entrusted with the management of a church community or parish and who is responsible for the management of church services , pastoral care and, as a rule, also for the administration of the secular affairs of the parish or church community . In the Roman Catholic Church , only one priest can be a pastor of a parish. Instead of leading a congregation, however, a pastor can also take on a special service. The Roman Catholic Church, the Evangelical Church in Germany and the Independent Evangelical Lutheran Church regulate the rights and duties of pastors through church law (pastor's service law), which is largely based on state civil service law and the careers of academic councilors .

A pastor from the Church of Norway giving confirmation

The word pastor goes back to the older parish "district of a pastor", which was borrowed from the Greek παροικία ("neighborhood"). In the 19th century, “pastor” was the name of the pastor's wife. 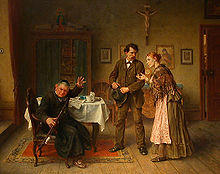 Visit to the village priest , painting by Ludwig Knaus , 1905

The pastor , painting by Ferdinand Hodler , 1879

A pastor usually holds a parish office . In central and northern Germany the pastor is also called a pastor . The position and tasks of a pastor are different in the Christian denominations : In the Protestant churches and the Old Catholic Church , the pastor is either elected by the parish or appointed by the higher-level church leadership from the circle of clergy in the respective church. In the second case, the need for the appointment vocation by the church council take place. In rare cases, the pastor's post is filled by a patron after presentation .

In the Protestant churches, one becomes a pastor through ordination . An applicant is entrusted with the public proclamation of the word of God and the administration of the sacraments (especially baptism and the Lord's Supper ). In the ordination the pastor promises pastoral secrecy and the keeping of the confessional secret . A pastor can then lead a congregation or do spiritual work in another area. Most Protestant churches ordain women and men exclusively in the parish priesthood and require a practical period in the parish priesthood for special pastors. In Switzerland in 1918 ordained women no rectory was credited and they were not allowed to call himself a pastor. The first female pastor in Europe with a full pastoral office was elected in autumn 1931 in the municipality of Furna in the canton of Graubünden .

In the Roman Catholic Church , an ordained priest is appointed pastor by the diocesan bishop after passing the relevant exams. In addition to the dispensing of the sacraments and the proclamation of the word of God in worship and pastoral care, the classic parish pastoral office always also includes the administration of a community, such as maintaining the church records and the legal supervision of employees.

In order to be able to become a pastor, an applicant must have studied theology and passed exams according to the regulations of the respective diocese . As a rule, there is an academic and a practical preparation phase for parish ministry. In the Catholic Church are facing the ordination academic tests of theological studies and the completion of the practical training (Pastoral course) and after ordination and a certain period of service as a chaplain in a parish other tests ( parish exam ) according to the order of the respective diocese. A pastorate is usually only awarded after a priest has proven himself in the ministry for a number of years.

The introduction of a pastor into his office or his community takes place in the context of a solemn Holy Mass . This is to strengthen the faith in the church and the applicant that God is calling him to his service.

Catholic priests have been forbidden by church law since 1983 from assuming public offices that involve participation in the exercise of secular power.

In the Roman Catholic Church the pastor officiates under the authority and in the name of the bishop, but once the pastor has taken possession of his office ( investiture ), the bishop cannot transfer him without his consent, special reasons or his resignation . Except for the power to give the sacrament of consecration (ordination) and to give confirmation , he has full jurisdiction in his parish. According to Roman Catholic church law, the pastor in the Latin Church is pastor proprius (“one's own shepherd”) of the parish entrusted to him, also known as the canonical pastor . However, it is possible for the bishop to remove the pastor from office for serious reasons. The official business in his parishes leads the priest to a certain extent free, but to also comply with the diocese bound and to working with pastoral workers and volunteers in councils (. Eg parish council , parish Board , parish council and committees) instructed. If a pastor is entrusted with the temporary management of a parish, one speaks of a parish administrator .

The moderator occupies a special position in the Roman Catholic Church . Contrary to the principle that only one pastor can be a pastor in a parish (can. 526 § 1 CIC 1983), it is possible to entrust a group of priests with pastoral care in a parish, one of whom is responsible for the leader or moderator Bishop and the coordination of pastoral care must take over. A parish can also be assigned to a religious institute or to a community of consecrated life, but here too a suitable member of these communities must be appointed as pastor or moderator.

In Austria there is also another form of moderator by resolution of the bishops' conference: This is given "responsibility for a parish for a long time", he has the same powers and tasks as a pastor, but is in an employment relationship with the diocese and does not become Pastor in the full sense of can. 519 ordered. This is primarily used to facilitate the transfer of pastors.

In the Lutheran regional churches, the parish order stipulates that the parishes are led jointly by the parish council (or parish council) and pastor. According to this, the members of the church council are obliged to work together according to their gifts and strengths. The church council consists of elected members and members by virtue of office (i.e. the pastor or pastors). Chairmanship and deputy chairmanship are held by one elected member and one member by virtue of office. In the Württemberg Evangelical Regional Church , the pastor is relieved of administrative matters by the church clerk, who is also a member of the parish council and, as an employee of the parish , has to deal with various administrative tasks (processing of income and expenses, bookings, budget, construction work, personnel matters). Pedagogical tasks or those of social work can be assigned to a deacon in the Protestant churches . In this way, the pastor is given more freedom for his core tasks in the spiritual work of the community.

Pastors' laws regulate the legal framework and the relationship between individual pastors and the church leadership within the church.