The title of this article is ambiguous. Further meanings are listed under Volksstimme (disambiguation) . 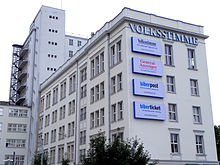 The Volksstimme office building in Magdeburg

The Volksstimme is a daily newspaper for northern and central Saxony-Anhalt with its headquarters in Magdeburg . Its area of ​​distribution is based on the borders of the former Magdeburg district . The Mitteldeutsche Zeitung appears in the south of Saxony-Anhalt, in the area of ​​the former Halle district . As a regional daily newspaper, Volksstimme is a monopoly in the center of Saxony-Anhalt . Only in the Altmark does it have a competitor with the Altmark Zeitung, founded in 1990 .

The newspaper appears six times a week, working day mornings, including Saturdays, in the Rhenish format . The local edition of the state capital, the Magdeburger Volksstimme , is distributed and quoted nationwide. For a few years the subtitle continued the traditional name of the former bourgeois-liberal Magdeburg newspaper . The sold circulation is 147,886 copies, a decrease of 47.7 percent since 1998.

Alois Kösters has been the editor-in-chief since October 1, 2011 .

The Volksstimme daily, founded in 1890 and then oriented towards social democracy , had a circulation of 34,000 copies before World War I and was banned by the National Socialists in 1933. Published from August 1947 as the SED newspaper for Magdeburg, it had been the organ of the SED district leadership in Magdeburg since 1952 . After the editorial team broke up with its publisher on January 15, 1990 , it was written on its own. It was not transferred to the workforce. The SPD, as the former owner, gave up its claim to ownership and instead took a stake in the Dresdner Sächsische Zeitung .

The THA were in 1991. 13 bids for the privatization and acquisition of Magdeburg in the former press house of Fritz Faber resident voice of the people in front, where until 1944 the Magdeburgische newspaper had been the oldest continuously published newspaper, founded in the 17th century in Germany, produces. Since then, Volksstimme has been published by Magdeburger Verlags- und Druckhaus GmbH, a wholly-owned subsidiary of the Bauer Verlagsgruppe Hamburg, known for its program and yellow press papers , today's Bauer Media Group . The print shop has been located a few kilometers north of Magdeburg in Barleben in the Börde district since the mid-1990s and the main editorial office since 1998 .

The Volksstimme has lost a lot of its circulation in recent years . The number of copies sold has fallen by an average of 2.7% per year over the past 10 years. Last year it decreased by 3.5%. It is currently 147,886 copies. The share of subscriptions in the circulation sold is 92.3 percent.