Wolmirstedt is a town in the Börde district in Saxony-Anhalt .

Wolmirstedt is located on the Ohre , 14 kilometers north of Magdeburg . The city area crosses the Mittelland Canal in the south and extends to the Elbe in the east .

In addition to the core town of Wolmirstedt, the following districts are shown:

The annual precipitation is 472 mm and is therefore extremely low, lower values ​​are registered at only one percent of the measuring stations of the German Weather Service . The driest month is February, with the most rainfall in June. In June there is 1.8 times more rainfall than in February. 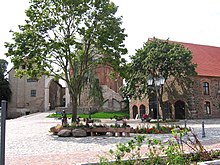 The first documentary mention came from the year 1014. Thietmar von Merseburg reported in his chronicle of an event that had occurred five years earlier in Wolmirstedt. He referred to anno 1009.

Heinrich the Lion was overthrown as Duke of Saxony in 1180 and died in 1195. This gave the Ascani the opportunity to include the area west of the Elbe in their territorial formation . One of the measures taken by Albrecht II , Margrave of Brandenburg (1205–1220) was the expansion of Wolmirstedt Castle in 1208. According to the margrave chronicle, it was directed against the Archbishopric of Magdeburg . Armed conflicts between the two did not come down to us until later times, it was about the supremacy in the Elbe- Oder region . The troops of Wilbrand , Archbishop of Magdeburg (1235–1253) and Heinrich III. , Margrave of Meißen (1221–1288) incinerated Wolmirstedt in the summer of 1243.

The area around Wolmirstedt was called Grafschaft Billungshöhe, which u. a. had a Dingstätte near Dahlenwarsleben and was temporarily administered by the Counts of Falkenstein on behalf of the Margraves . On June 11, 1316, Waldemar , Margrave of Brandenburg (1308-1319) sold the county of Billungshöhe for 2,260  marks with the right of repurchase to the Archbishopric of Magdeburg. Wolmirstedt and Elbeu were excluded . Waldemar pledged the former town and probably also the neighboring village south of the Ohre three years later to the archbishop for 12,000 marks. Since no redemption took place, the land register of Emperor Charles IV of 1375 added the spots and the castle to the spiritual territory .

Wolmirstedt played a role in the appearance of the fake Waldemar . Arriving from Magdeburg , he presented himself to the public for the first time in August 1348. Several certificates were issued on site between August 17th and 20th, granting privileges to towns in Markbrandenburg. At the end of August, the alleged margrave rode into the march accompanied by Otto , Archbishop of Magdeburg (1327-1361), Rudolf I and Otto, dukes of Saxony-Wittenberg , Albrecht, Count von Barby and their followers . The village itself received city ​​rights in 1590 .

In the Thirty Years' War (1618-1648) it suffered severe damage. Wolmirstedt housed an imperial garrison. In July 1631 a cavalry regiment moved from her to Burgstall . The cavalry of Gustav Adolf II , King of Sweden (1611–1632) slaughtered it. In 1680 the archbishopric became the Duchy of Magdeburg in Brandenburg-Prussia , Wolmirstedt was already in the wooden circle .

In the years 1848/49 the station building was connected to the railway network. From 1850 the leather industry settled with six factories. The city has had its own power station since 1895. Later, with the Wolmirstedt substation, it became an important node in the power grid.

On April 13, 1945, US troops occupied Wolmirstedt and transferred it to the Soviet occupation zone on July 1, 1945 . 1952 Elbeu was incorporated. In the years that followed, voluntary construction work resulted in the Stadium of Peace, the open-air stage and the promenade on the Ohre. Housing construction was promoted in the 1970s. 3000 apartments were built primarily using prefabricated panels.

Since the local elections on May 25, 2014 , the city council has 28 members. The turnout was 39.1 percent. The choice brought the following result:

Since the local elections on May 26, 2019 , the city council has 28 members. The turnout was 43.3 percent. The choice led to the following result:

Another member of the city council and its chairman is the mayor. Martin Stichnoth was elected mayor on February 17, 2013. In the first ballot, he got 54.0 percent of the vote and thus made a runoff unnecessary. The turnout was 48.0 percent.

The coat of arms was approved on June 20, 1997 by the Magdeburg Regional Council.

Blazon : “In silver, Saint Catherine in a red robe with golden hair and a golden nimbus, in her right hand an overturned silver sword with a golden quillons and golden hilt, in the left a broken golden wheel with five spokes and four points; a blue shield with a silver lily at her feet. "

The colors of the city are blue - silver (white).

The city flag is divided diagonally into two fields, blue in the upper left field and white in the lower right field. In the middle it contains the coat of arms of the city.

The notable buildings in the historic city center include:

The other sacred buildings besides the castle church are:

West of the city center are:

In Wolmirstedt there is a large 380 kV substation , the Wolmirstedt substation . During the GDR era, an HVDC close coupling with a transmission capacity of 600 megawatts was to be built on the area of ​​this substation , but this plan was abandoned after German reunification in 1990 because it was decided to synchronize the power grids of East and West Germany, see also the German electricity network . The converter hall was completed (coordinate: 52 ° 15 ′ 0 ″  N , 11 ° 37 ′ 0 ″  E ). The 380 kV line leading from the Wolmirstedt substation to the decommissioned Lubmin nuclear power plant was the longest power line in Germany. 52.25 11.616666666667