After the Saxon-Wittenberg line of the Ascanians in the male line died out in 1422, King Sigismund enfeoffed the Meissnian margrave Friedrich the feudal from the Wettin line with the duchy, whereby the Saxon electoral dignity was also passed to him in 1423.

In 1134 Albrecht the Bear was appointed Margrave of the Nordmark (Altmark) by the German King Lothar von Supplinburg . He belonged to the Ascanian family who named themselves after the castle Askanien an der Eine on the eastern edge of the Harz Mountains. On his army campaigns against the Old Sorbian Slavic tribes he conquered Brandenburg in 1157 . That is why he took on the title of Margrave of Brandenburg and extended his rule to the south of the Elbe. However, the previously not very densely populated and now subject area was devastated and partly abandoned by the Slavs. On the other hand, farmers and citizens in the Rhineland , Flanders , Saxony and Franconia had begun to evade the increasing burdens and to seek out new settlement areas. Albrecht directed part of this stream into his territory. In 1159/1160 he advertised among the Rhinelanders, but above all among the Flemings , Zealanders and Dutch , who were afflicted by floods, promising favorable living conditions. In the south of the margraviate of Brandenburg, mainly Flemings settled, so that the ridge deposited by the Ice Age was named after them the Fläming . The immigrants also moved to villages south of it, even to the left of the Elbe . From the mouth of the Saale into the Elbe to over the confluence of the Schwarzer Elster and Elbe. Often they took over the names of the existing, mostly Slavic settlements. Sometimes they gave them a new name; they also named the places they founded.

When the area of ​​the Old Sorbian Slavic tribes was conquered in the first phase of the establishment of East Elbe rule by German feudal lords, the areas were initially divided into districts, in which fortified places were created from which the surrounding landscape was dominated and administered. The beginnings of Wittenberg go back to such a castle, which is said to have been built by Albrecht the Bears to protect the Elbe crossing and which was first mentioned in 1187 as the German Burgward. Conducive to the early urban development of traffic on the Fernhandelsweg of Magdeburg and was Zerbst over Wittenberg in the area of the Black Elster and the Niederlausitz or after Meissen , ie in east-west direction and the north-south connection of Cölln and Berlin over Wittenberg to Leipzig .

Due to the lack of written records, the question of whether Duke Bernhard received the area around Wittenberg immediately after the death of his father Albrechts the Bear in 1170 or only through inheritance after the death of his brother Dietrich von Werben in 1183 remained open in scientific research. As 1180 Heinrich the lion lost the duchy of Saxony , the eastern part of it was given to Bernhard as a fief. 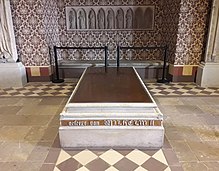 After Duke Bernhard died in 1212, his legacy was his two sons Henry and I. Albrecht split. The elder Heinrich received the old Ascanian counties as well as hereditary and ancestral lands in the region of the Vorharz and the lower Saale and became the founder of the Anhalt rulership, which remained in the hands of the Ascanians until 1918. The younger Albrecht, on the other hand, received the Duchy of Saxony with his imperial fiefs on the middle Elbe as well as several Ascanian patrimonial estates east and directly on the Mulde, including in particular the region around Aken and Wittenberg as well as free float in the old Ascanian county of Aschersleben.

Albrecht I tried to reestablish ducal power on the middle Elbe, which he succeeded. The name Saxony gradually became established for the areas he ruled in this area, and from 1227 he called himself Duke of Saxony, Engern and Westphalia. Duke Albrecht I participated directly in the election of King Wilhelm as early as 1252 .

After Albrecht's death in 1261, his two sons Johann I and Albrecht II ruled together until the older brother Johann I took over special ownership in the north of the duchy in 1282, which he soon gave to his three sons Johann II , Albrecht III. and left Ericht I. to enter the Franciscan monastery in Wittenberg himself. However, Johann I died in 1286, and his sons were placed under the tutelage of their uncle Albrechts II. He tried to keep the property together, but when his nephews came of age in 1295, the final separation of the Duchy of Saxony into the two duchies of Saxony-Lauenburg and Saxony-Wittenberg could not be stopped. Albrecht II kept the area upstream and named it after the place of his residence: Sachsen-Wittenberg. In 1290 this duchy was expanded to include the Burggrafschaft Magdeburg and the Grafschaft Brehna . There was even more area expansion. 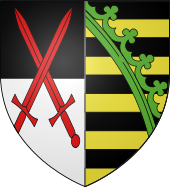 Electoral coat of arms of Saxony-Wittenberg

When Albrecht II died in 1296, his son Rudolf I followed him in the government. In the dispute between Ludwig the Bavarian and the Luxembourger Karl over the German royal dignity, Rudolf sided with Charles, for which he was permanently rewarded with the electoral dignity in 1356. With this, Saxony-Wittenberg was finally promoted to one of the seven German electoral principalities.

Approximate demarcation of Saxony-Wittenberg around 1423

When the Wittenberg Ascanians with Albrecht III. Extinct in 1422, Saxony-Wittenberg had little power, but as an electorate it was endowed with a high rank. Therefore, the replacement of the Saxony-Wittenberg area was also in great demand. It was awarded on January 6, 1423 by the later Emperor Sigismund , who enfeoffed the Wettin Margrave Friedrich the Warriors of Meissen and Thuringia for his fight against the Hussites with the Electorate of Saxony . When this elector became Elector of Saxony, the term Saxony moved up the Elbe, with the further attachment of the electoral dignity to Wittenberg. This means that whoever owned Wittenberg also held the title of elector and the electoral vote of the arch marshal .

On November 9th, 1485, contrary to numerous advice and warnings, Elector Ernst and Duke Albrecht shared their property in Leipzig . In this way, two Wettin dynasties emerged from the Electorate of Saxony, which had previously been ruled jointly by both of them. From then on there was talk of the Ernestines and the Albertines . In addition to the Wittenberger Kurkreis and the associated office, the Ernestine possessions included parts of the old Landgraviate of Thuringia as well as the Vogt and Pleißenland . Frederick the Wise expanded Wittenberg into an electoral residence and the area became the heartland of the Reformation . He was followed by his brother Johann the Steadfast and Johann Friedrich the Magnanimous . The latter was defeated and captured by Emperor Karl V in the Schmalkaldic War in the Battle of Lochauer Heide in 1547. The emperor took away the electoral dignity and part of the Kurlande and enfeoffed his cousin Moritz von Sachsen ( Wittenberg surrender ). The division of the electorate into seven districts began under Moritz von Sachsen . The Kurkreis emerged from the Duchy of Saxony-Wittenberg.

See also: List of the tribal dukes of Saxony up to 1180

See also: List of the Electors, Dukes and Kings of Saxony from 1356