The title of this article is ambiguous. For the Kurrheinische Reichskreis see there

The Kurkreis , which was renamed the Wittenberger Kreis in 1807, was a historical territory that essentially emerged from the core area of ​​the former Duchy of Saxony-Wittenberg . The Kurkreis was under the government of Friedrich III. des Wise created in 1499 and was part of the Electorate of Saxony . The name "Kur" refers to the electoral dignity of the Saxon electors , which was linked to this territory.

The area of ​​the spa district today largely belongs to the states of Brandenburg and Saxony-Anhalt . A small part is located in the north of Saxony . The Elbe , the Black Elster and, on a small section, the Mulde flowed through the circle . The most important place in the district was the city of Wittenberg . 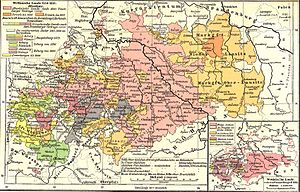 Kurkreis and the other Saxon districts

Johann Friedrich the Magnanimous was defeated and captured by Emperor Charles V in the Schmalkaldic War in the Battle of Mühlberg on April 24, 1547. The emperor took away the electoral dignity and part of the Kurlande and enfeoffed his cousin Moritz von Sachsen . Saxony-Wittenberg passed from the Ernestine to the Albertine line .

Moritz of Saxony began a new division of his electorate. In addition to six other districts , the Kurkreis with its capital Wittenberg was established . The resulting Kurkreis consisted of the former Ascanic possessions, to which the offices of Annaburg , Belzig , Graefenhainichen , Liebenwerda , Pretzsch / Elbe , Seyda and Wittenberg belonged, the old county of Brehna with the offices of Bitterfeld (1738), Schlieben and Schweinitz and the Burggrafentum Magdeburg with the Gommerschen offices ( Gommern , Elbenau , Ranies , Glinde , Plötzky ) and the county of Barby .

After Elector Friedrich August I of Saxony joined the Rhine Confederation in the Peace of Poznan , the district was renamed the Wittenberg District on January 30, 1807 . In 1807, the offices of the Burggrafschaft Magdeburg and the Grafschaft Barby were transferred from this district to the King of Westphalia , who incorporated it into the department of the Elbe .

In order to contribute to the "restoration of order and calm in Europe", Prussia and Saxony signed a peace and friendship treaty on May 18, 1815, in which Saxony ceded three fifths of its territory to Prussia. On May 22, 1815, the Prussian state took over the territories assigned to it as the Province of Saxony , which were divided into the three administrative districts of Magdeburg , Merseburg and Erfurt . At that time the spa area covered an area of ​​66 square miles with 140,000 inhabitants.

The Kurkreis emerged from the Duchy of Saxony-Wittenberg and the County of Brehna and was divided into the following offices:

The Kurkreis according to Schreiber

The authorities of the Kurkreis also had the higher court over the domains of the aristocracy belonging to the landscape. This mainly included: