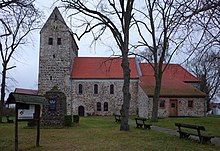 The area of ​​the village of Plötzky, located southeast of Magdeburg , extends from the banks of the Elbe in the south over the Old Elbe to the edge of the city of Gommern in the north. The Elbe Umflutkanal branches off from the Old Elbe near Plötzky . The flat terrain is rich in forests and lakes. There are local recreation areas around several lakes, such as the Königsee , Columbussee , Giselasee and Edersee with weekend houses and camping areas. The Plötzky district borders in the north on the state capital Magdeburg and the district of Jerichower Land .

Plötzky could have emerged as a Slavic foundation between 650 and 900. In the 11th and 12th centuries there was a Christian colonization of the East Elbe areas. Quartzite mining began in the village as early as the 12th century . The St. Maria Magdalena Church was built around 1170 . The Sankt-Maria-auf-dem-Georgenberg monastery, operated by Cistercians , was founded around 1210.

Plötzky was first mentioned in a document in 1228. The name could be derived from the Slavonic plot (Polish: płot = fence, Russian: плот = raft). The first Roland was built around 1400, and Plötzky had town charter . In the course of the Reformation , the monastery was dissolved in 1538 and most of the monastery buildings were demolished in 1578. With the establishment of the Gommern Office , Plötzky then lost its city status.

Between 1567 and 1874, the old ferry was in operation south of the village , a ferry across the Elbe, where an inn is located today.

For the year 1645 Plötzky is led as a desert due to the consequences of the Thirty Years War .

In 1876 a wooden bridge was built in place of the old ferry. As early as 1871 to 1875 the Pretziener weir was built in the neighboring town of Pretzien and the Elbe flood canal south of Plötzky . Quartzite mining, which dominated the area, was stopped in 1963.

In 1992 the Schönebeck administrative association was founded, to which Plötzky belonged. In 2004 a new bridge was built on the old ferry. In 2005 Plötzky received another Roland. On January 1, 2009, the place was incorporated into Schönebeck.

The colors of the parish are gold (yellow) - red.

The federal highway 246a crosses Plötzky on the way from Gommern to Schönebeck (Elbe) . The nearest train stations are in these two cities (Magdeburg– Dessau and Magdeburg– Halle lines ).

Districts of the city of Schönebeck (Elbe)