Bust of Amenhotep III. made of quartzite

Quartzites are fine to medium-grained metamorphic rocks , which are held with quartz from 98 percent defined. They are characterized by their relatively high resistance to environmental influences.

In many cases, the term quartzite is not quite correctly applied to sandstones that are as hard as real quartzite as a result of being cemented by silica (silicification). A rarely used name for these pebbles is cement quartzite .

In many cases, pure quartzite has a white-gray or white color, such as the silver quartzite from Italy. Yellow and red colors are caused by the addition of iron minerals. The frequently occurring yellow variants are caused by the mineral limonite , which is often present in the original rock . Due to impurities from magnetite and pyrite , quartzite is sometimes brown or gray in color, colors such as dark green or gray-blue are less common. The mineral dumortierite or kyanite colors the quartzites bluish to blue.

Quartzite essentially consists of interconnected, recrystallized en quartz grains by pressure solution at the grain boundaries sintered are. Depending on the degree of metamorphism , very hard and brittle rocks can sometimes arise, but weakly metamorphic quartzites can be less resistant to abrasion and frost. Also, sedimentary structures of the original stone such. B. ripple marks or oblique stratification have been preserved.

A rare variety of quartzite is the flexible itacolumite or articulated quartz (due to its high content of sheet silicates ) .

Quartzite is usually formed from sandstone through metamorphosis , but silica slate , radiolarite or chert are also possible as starting rock . Through a combination of pressure , temperature and mechanical stress, the individual quartz grains are deformed by the pressure solution and their crystal lattice begins to rearrange itself. During this recrystallization , they grow beyond their original grain boundaries (see the thin section image of the former quartz grains) and form a densely networked structure. The original pore spaces and the sediment structure have, depending on the degree of metamorphosis, almost completely disappeared. If the original rock contains clay components, mica minerals such as silvery muscovite or greenish phengite are formed . An aligned pressure direction creates the layered structure that can be split up. Organic components (carbonaceous parts) in the original rock are converted into graphite, among other things. The remaining fossil parts consisting of inorganic matter are "broken down" and are no longer present in real quartzites. According to geological research, the "quartzitic metamorphosis begins at a sinking depth of 600 meters and at over 200 ° C".

In addition to color, cleavage is an important distinguishing feature of quartzite variants. Block quartzite, such as is mined near Wasa (Sweden), or the blue Azul Macaubas from Brazil, is difficult to split. Fissile quartzites are usually formed by regional metamorphosis : mica is formed orthogonally to the direction of pressure , which afterwards defines the direction of the fission as thin separating layers, a process similar to that of the formation of slate . The direction of the deposit is relevant for the direction of the splitting and the usability, the frost resistance is not influenced by it. 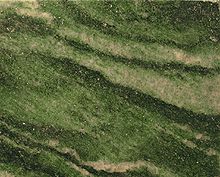 Quartzite Masi with a high content of fuchsite (Norway) 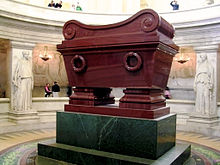 Quartzite is widespread worldwide and is a common rock in metamorphic orrogenic complexes . Occurrences in Europe include the numerous quartzite deposits in the Alps or, for example, the quartzite deposits in Spain ( Córdoba , Segovia ), Bulgaria ( Balkan Mountains ) or in Scandinavia. Quartzites occur in many of the ancient cratons , for example at the Jebel Uweinat in the Eastern Sahara craton in Egypt, in the São Francisco craton in Brazil or in the Kaniapiskau supergroup of the Labrador Basin on the northeastern edge of the Superior craton in North America . Quartzites are also occasionally found as glacial debris in northern Germany, they come from metamorphic series in Sweden and Norway. The rocks of this group most frequently used in the natural stone sector in Germany are the Alta quartzite from Alta (Norway) and the exclusive and high-priced blue varieties from the state of Bahia in Brazil ( Azul Do Macaubas , Azul Imperial ) and from Scandinavia ( Caribbean Blue ).

Many of the rocks commonly referred to as quartzite are not real quartzites, but sandstones solidified by silica. In Germany such "quartzites" or "rock quartzites" include the Taunus quartzite in the Rhenish Slate Mountains on both sides of the Middle Rhine Valley in the Taunus and in the Hunsrück . Further occurrences are in the Eifel , in the Westerwald and east of it in the Hörre . Furthermore, quartzite sandstone is exposed in the western Harz ; there it is slightly reddish in color and is known as Acker-Bruchberg quartzite . Outside Germany, many silicified sandstones also bear the name quartzite, for example in Brittany ( Armorican quartzite ) or the "quartzites" of the Cambrian in the Montagne Noire ( Mur quartzeux ).

A notable example of European decorative rocks of this type is the Schokschinsk variety from an extraction site on the west bank of Lake Onega . This natural stone was u. a. used for Napoleon's sarcophagus ( Invalides Cathedral ) and for the upper portico of the Lenin Mausoleum in Moscow.

Economic importance and use

Due to its hardness, quartzite was a very useful substitute for flint even in the Stone Age . Many tool finds from this period consist of quartzite, both real quartzite and hard, silicified sandstone. The Lübbensteine are two megalithic complexes from the Neolithic Age, whose origins date back to around 3500 BC. Can be dated BC. Local brown coal quartzites are their material.

In Egypt, silicified sandstone, but also real quartzite, was widely used in architecture and art. Examples of this are the coffins of Hatshepsut or Tutankhamun , which were hewn from a large block, or the Colossi of Memnon in the temple of Amenhotep III. in Luxor . The ancient mining areas were used until the time of the Roman Empire. There are mainly two localities, on the Gebel el-Ahmar (east bank of the Nile) northeast of Cairo and on Gebel Gulab / Gebel Tingar (west bank of the Nile) near Aswan. Several extraction sites can be identified at each of the above surveys. It was u. a. worked with dolerite tools.

Quartzite as a natural stone

Many quartzites are used in particular as natural stone . There are numerous varieties on the market that are traded under their own names.

High-density fissile quartzites such as Alta quartzite are used as floor coverings in highly stressed areas (for example at Leipzig Airport), mostly in a naturally rough formation, more rarely in a polished form. Block quartzite is used as a kitchen worktop.

The suitability as a decorative building material does not depend so much on the mineral composition, but rather on the degree of metamorphosis and the pore radius distribution. Wasa quartzite in red and Azul do Macaubas in blue are relatively stable rocks. Pink quartzite from Brazil is rarely used any more, as it can irreversibly discolour with mortar water and it absorbs liquid dirt very easily due to the unfavorable pore radius distribution. As with any transformation rock, the mineral structure is inhomogeneous. Rocks like Azul do Macaubas can contain the mineral sericite , which is unstable. With water and CO 2 , white spots form in this and other quartzites that can no longer be removed. Wet areas should therefore not be executed with this quartzite. On the other hand, some varieties such as Alta Quartzite or Albino Yellow from Brazil can be used relatively easily in the bathroom.

Here too, Alta Quartzite is a very durable material. The low porosity of this quartzite means that no mosses can settle on the weather side . Depending on the porosity, certain types of quartzite can be blown up by microbiological colonization, alternation of frost and de-icing salt.

In general, the quartz crystals are relatively stable, the coloring components are usually the weak point in terms of resistance to chemicals. Yellowish quartzites are sometimes very sensitive to hydrochloric or phosphoric acid . Hydrofluoric acid generally attacks quartzite. Amidosulfonic acid , on the other hand, can be used to remove limescale without hesitation.

This is almost the same in the alkaline range. Universal basic cleaner based on ammonia, which has a max. Reaching a pH value of 10.5 generally does not attack quartzites. Highly alkaline products that contain sodium or potassium hydroxide not only damage the quartz, but also the coloring minerals. Household products such as oven cleaners contain harmful high alkalis. The high alkalis also include calcium hydroxide from the mortar, which can break down iron minerals. As a result, free iron can be transported to the surface with the transport medium water, which forms visible iron oxides with the oxygen .

Is the rock highly dense, i.e. H. very low porous, it should be expected that by an adhesive paint on the bottoms and possibly is necessary even at the edges of the plates. A rupture from the mortar bed is not uncommon with high-density quartzites. The reason for this is the lack of mechanical interlocking of the hardened mortar with the quartzite due to the low porosity. In the case of pink quartzite , chemically induced discolouration occurs very often due to the laying agent - but the mortar adhesion is very good. Therefore, the mortar manufacturer should be contacted before installing quartzites. In outdoor areas or on underfloor heating , thermal expansion is another important factor. Quartzites have the highest coefficient of expansion of all natural stones used technically. This should be taken into account when dimensioning the expansion joints and selecting the substructure.