Radiolarite is a biogenic ("aquagenes"), marine sedimentary rock , which mainly consists of microcrystalline quartz . It is therefore also listed with other extremely fine-grained quartz rocks under the generic term chert . Dark radiolarites of the Paleozoic Era are also known as Lydite or Kieselschiefer , even if they are often not formed slate.

Two radiolarite handpieces from the Jura of the Slovak Carpathians

Radiolarites are very fine-grain biogenic , marine sedimentary rocks with a layered structure. In them, layers alternate with clastic mica , occasional carbonate components , radiolarian skeletal material and organic pigment . The proportion of clay minerals is low. Radiolarites can occur in connection with carbonate rock layers if they are formed in shallow water. However, they are usually a sediment at great depths.

The rock is brittle and cannot be split easily, but breaks with sharp edges and mussels. A very narrow fissure is typical of Radiolarite, as a result of which the material initially disintegrates into small cuboid pieces in the course of weathering . The colors range from light whitish to reddish, greenish and brownish to black.

Radiolarites mainly consist of radiolarian skeletons and their debris, i.e. silicon dioxide . Radiolarians ( radiation animals ) are marine, planktonically living, single-celled animals that have an inner skeleton made of amorphous silicon dioxide and whose size varies between 0.1 and 0.5 millimeters. In their wealth of forms, in addition to the Albaillellaria and the Ectinaria, the two important orders of the spherical Spumellaria and the cap-shaped Nassellaria can be distinguished and identified. Otherwise, radiolarites are largely fossil-free.

Microfossils about 12,000 years old from the Antarctic continental slope ( Weddell Sea ). The translucent small spheres (Ø ≈ 0.5 mm) in the sediment sample are radiolarians

According to Takahashi (1983), radiolarians continue to float in the euphotic zone (productive surface layer up to around 200 meters water depth) for 2 to 6 weeks after they have died , only then do they begin to gradually sink. According to Takahashi (1981), this sinking process through 5000 meters of water can take between 2 weeks and 14 months.

With the decomposition of the organic substance, the disintegration of the silica skeleton begins. The dissolution processes are most effective in the ocean in the top 750 meters, below that only a little SiO 2 is dissolved. The sediment / water boundary layer is again very solvent-active (with a penetration depth of a few centimeters into the sediment), about three times as high as in the sediment below. But the dissolution and conversion processes also continue in the sediment (see diagenesis). The survival rate of the radiolar skeletons is low, it is estimated at around 1 percent. According to Dunbar & Berger (1981), radiolarians owe this 1 percent to their colony-forming abilities and to the fact that they are occasionally embedded in fecal pills and other organic aggregates. The organic coating protects the silica skeleton from dissolution (Casey et al. 1979), and according to Vinogradov & Tsitlin the rate of descent through the water column increases tenfold.

After the radiolarian sludge has settled, diagenetic processes begin to affect the sediment. The silica skeletons dissolve and dissolve and the amorphous starting material gradually transforms from opal-A to opal-CT (opal with crystal nuclei of cristobalite and tridymite ) and with increasing temperature and pressure to chalcedony and finally to stable, cryptocrystalline quartz . These phase changes are accompanied by a gradual reduction in porosity , which is noticeable as a compaction .

Mookait from the Kennedy Ranges, near Gascoyne Junction, Western Australia in the permanent collection of the Children's Museum of Indianapolis

The previously held view that radiolarians and consequently radiolarites would only be deposited under pelagic deep water conditions can no longer be upheld. Radiolaria- rich layers occur, for example, in the Solnhofen limestone and in the works limestone of Middle Franconia , both of which are shallow water sediments. The most important condition for the deposition depth of the radiolarite is that the storm wave base is not reached and that erosive surface currents are avoided. Kalklose radiolarites are obviously below the Kalzitkompensationstiefe ( engl. Calcite compensation depth or CCD ) has been discontinued. It should be noted here that the CCD has been exposed to strong depth fluctuations in the course of the Earth's history and is currently dependent on the geographical latitude - its maximum depth is around 5000 meters at the equator .

The banding characteristic of Radiolarite is primarily caused by the change in the sediment supply, which is secondarily superimposed by diagenetic effects. In the simple clay / silica system, if the supply of clay remains constant, the rhythmic differences in the radiolarian production result in a clay stone / chert alternating layer. The sedimentary differences are further intensified during the diagenesis, as the silica migrates from the clay-rich layers towards the opal layers. A distinction can be made between two cases: With a strong supply of radiolarians and constant clay sedimentation, very thick chert bands form. Conversely, with a constant supply of opal, a high, periodically changing supply of clay can lead to thick pitches with only thin chert separating layers. However, this simple two-component system is further complicated by the addition of carbonate . This is because there is also a chemical incompatibility between the components carbonate and silica, which causes the silica component to agglomerate into tubers within the lime-rich areas during diagenesis. As a result, complex storage conditions can develop, which depend on the respective initial ratio of the components clay, silica and carbonate as well as on the temporal variations of the individual components in the course of the sedimentation (the decisive factor here is which of the components occur in phase and which of the components provide the background sedimentation) .

The long-period rhythm in the production of radiolarians could partly be associated with Milanković cycles , short-period fluctuations can be traced back to El Nino cycles and / or, comparable to varves, to annual rhythms. 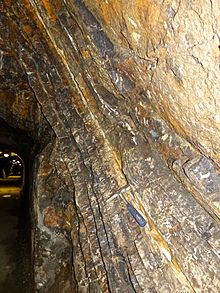 The oldest known radiolarites come from the Upper Cambrian of Kazakhstan . Over a period of 15 million years Radiolarienschlick was down to here Ordovician sediments inside. The deep-water sediment deposited near the equator at the time is associated with remnants of oceanic crust and could be dated using conodonts . Four radiolarian fauna communities could be eliminated in calcareous areas; the oldest, relatively species-poor fauna comes from the second stage of the Ordovician (formerly Lower Arenig ). The youngest, relatively species-rich fauna community with 15 taxa dates to the fifth stage (former Lower Caradoc ).

Radiolarites were also formed in the Middle Ordovician of Scotland (Upper Darriwilium or Upper Llanvirn), for example at Ballantrae . Cherts camp here on spilites and volcanic rocks . Radiolarites are also found in the neighboring Southern Uplands and are associated with pillow lava here .

The next occurrence of radiolarite is the Strong Island Chert from the Middle to Upper Ordovician Newfoundland . The radiolarite is formed as a red chert and lies over ophiolites .

In the Vogtland , in the Franconian-Thuringian Slate Mountains and in the Franconian Forest, as well as in the North Saxon Slate Mountains , deposits of dark gray to blackish silica slates (Lydites) from the Silurian are widespread. They begin at the transition from the Ordovician to the Silurian. Here, silica slate occurs mostly in connection with alum slate. Their deposits often form elongated lenses and banks that can hardly be traced over long distances.

The North American Novaculites ( Arkansas , Oklahoma and Texas ) from the uppermost Devonian are of great importance . The novaculites are thin-banked, milky-white colored pebbles that were weakly metamorphosed during the Ouachita orogeny . They mainly consist of micro quartz (5–35 µ), which has emerged from sponge clergy and radiolarians.

In Mississippian emerged in the Rhenish Slate Mountains also lydite. At the end of the Paleozoic , radiolarites were found on the southern edge of Laurasia in the vicinity of Meshhed in Iran , during the Lower Permian in Sicily in calcolistolites and in north-western Turkey (in the Karakaya complex of the Sakarya zone belonging to the Pontids ), in the Middle Perm in the Phyllite series of Crete as well as in the Upper Permian in the Hawasina nappes of Oman .

During the Triassic period , so-called chert limestone was sedimented in the Tethys region , for example in the upper Norium and Rhaetian in the South Karawanken ( Frauenkogel Formation ). They consist of chert layers and micrites alternating on uneven bank boundaries , with the chert layers representing silicified, radiolarian-rich limestone layers. In Greece the chert limestones also contain calcareous bidite . On deep-sea thresholds or uphill they can change into red, radiolarian-bearing ammonite limes. In central Japan , clay-layered radiolarites were deposited in a shallow marginal sea in the Upper Triassic, which have a very high accumulation rate of 30 mm / 1000 years. In addition to the radiolarians, sponge needles are very common.

In the Alps , radiolarites formed in the Northern Limestone Alps (summarized as the Ruhpolding radiolarite group ) and in the Penninic of France and Graubünden during the Jura ( Upper Bajoc to Untertithon period ) . In the same context, the radiolarites of Corsica should also be mentioned. The radiolarite of the Ligurian Apennines came a little later towards the end of the Jura.

Radiolarites formed on the west coast of the United States from the Middle Jurassic, for example in the Franciscan Complex . The radiolarites in the Great Valley Sequence are a little younger, they come from the Upper Jurassic.

In parallel to this, radiolarites were continuously sedimented in the western Pacific east of the Mariana Trench from the Obercallov to the end of the Valanginian over central Jurassic, oceanic crust .

An example of Cenozoic radiolarian tones and radiolarites is the Oceanic Group of Barbados . The group was deposited in the period from the early Eocene to the Middle Miocene on oceanic crust, which now subducts below the island arc .

Radiolarite or Lydite is a very hard rock and is considered the " iron of the Stone Age ". It was made into stone tools such as hatchets , blades , drills or scrapers . However, its breaking edges are not as sharp as those of flint . Axes made of Lydite are common in western Lower Saxony and northern Westphalia . The material comes to the surface of the earth in the Bramscher massif (near Bramsche ). The color varies between reddish, greenish, brownish and black, depending on the pigment content. Lydite, a black Paleozoic radiolarite, is used as a touchstone .

There are other deposits that were used commercially in Thuringia near Schleiz and Langgrün (both Silurian ), in Saxony near Schönfels , Altmannsgrün , Oelsnitz and Nossen , in the Harz near Sankt Andreasberg and Wernigerode and in Mauer near Vienna . The main purpose of quarrying was to extract gravel. There are also used deposits in the Czech Republic, Austria, Great Britain (Scotland), USA (Utah, Nevada, Idaho, Wyoming) as well as the world's most important deposits in Australia ( East Australian Tasman syncline ).