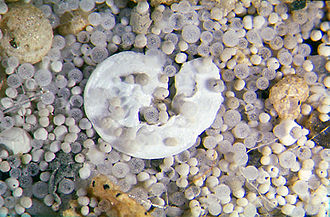 Meso- and microfossils from a 12,000-year-old sediment sample from the Antarctic continental slope: radiolarians (made of amorphous SiO 2 , the grayish, actually transparent spheroids), sponge needles (also made of amorphous SiO 2 ) and foraminifera (made of CaCO 3 and agglutinated silt / silt, the larger ones and / or lighter spheres). The width of the image section is about 10 mm.

A microfossil is a fossil between three hundredths of a millimeter and one millimeter in size . Such remains from the microcosm are examined in the context of micropalaeontology using light microscopy , the magnification factor is usually between 5 and 100. The boundaries between the smaller nannofossils and the larger macrofossils are fluid.

The microfossils include - apart from the large foraminifera - among others " protists " (single cells with a cell nucleus), tintinnids , ostracods , tentaculites and, if the size is appropriate, isolated remains of larger organisms such as sponge needles and conodonts , otoliths , fish scales , teeth and other remains small vertebrates (microvertebrates).

Microfossils are indispensable for the relative age determination ( biostratigraphy ) of sedimentary rocks from the Cambrian ( small shelly fauna ) to today. They are also important indicators for the reconstruction of the distribution of land and sea ( paleogeography ), for the exploration of the oceans ( paleo-oceanography ), for the description of fossil aquatic habitats ( paleo-environment ) and for the climate development ( paleoclimatology ) of the earth. With the help of the temperature-dependent discoloration of conodonts (conodont alteration index) , the thermal fate of sedimentary rocks can be traced, a fact that is important when searching ( prospecting ) for oil and natural gas deposits in applied geology ( deposit science ).