This article covers the chronostratigraphic system; for the volume see Cambrian (volume) .

The Cambrian is a period in Earth's history that corresponds to the period 541 to 485.4 million years ago. During this time, the so-called Cambrian Explosion, presumably as a result of changed environmental conditions in the sea (including increased oxygen content ) , gave rise to almost all of today's animal phyla.

The Cambrian is the lowest chronostratigraphic system and the oldest geochronological period of the Paleozoic and thus the Phanerozoic in geological history. Below or before that lies the era of the Neoproterozoic (Aeon Proterozoic ) with the Ediacarian as the most recent geological epoch of the Precambrian . Above or thereafter follows the period of the Ordovician .

Very few fossils have come to light from the strata older than the Cambrian . The entire period from the formation of the earth about 4.56 billion years ago to the development of the fauna in the Cambrian is summarized in the older literature as the Precambrian. 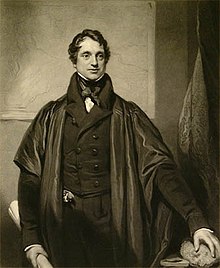 The name Cambrian for this system was suggested by Adam Sedgwick as early as 1835 after the Latin name of Wales ( Cambria ), since layers of the Cambrian are exposed there.

The beginning of the Cambrian

For a long time, the beginning of the Cambrian was assumed to be around 600 million years old, with the apparently first appearance of fossils. Only recently have fossils been found and examined in older layers. In the 1990s, the beginning of the Cambrian was fixed between 590 and 570 million years ago, with the appearance of the first trilobites and archaeocyathids (early sponge-like organisms with a calcareous skeleton ). As a result of the improvement in radiometric dating methods , this point in time has shifted closer and closer to the present in the last few decades. Also, new features have been proposed for marking the lower limit (base) of the Cambrian and / or set, including a detectable in accordance old sedimentary rock abnormality in the content of carbon - isotope C-13, with a fundamental change in the fossil fauna associated. By radiometric dating of zirconia in volcanic ash layers from Oman , an age of 542 million years could be determined for this C-13 anomaly with an accuracy of 0.3 million years.

End of the Cambrian

In the first half of the 19th century, the layers that lie directly above the youngest layers of the Cambrian were still called the Silurian . After problems with the demarcation, the term Ordovician was later coined for the basal layers of the Silurian in its original scope ; In the older literature, the system of the Ordovician may therefore be missing or layers that are now assigned to the Ordovician can be referred to as the lower silurium.

The beginning of the Cambrian and thus the Phanerozoic (and also the Terreneuvium series and the Fortunium stage of the Cambrian) was defined by the International Union of Geological Sciences (IUGS) with the first appearance of the trace fossil Trichophycus pedum . In addition, the limit is also very close to a carbon isotope negative anomaly. The upper limit (and thus also the beginning of the ordovician) is the first appearance of the conodont species Iapetognathus fluctivagus , which in turn lies just above the base of the Cordylodus lindstromi conodont zone. This limit is only slightly below the first occurrence of planktonic graptolites . A 140 m thick rock formation at the end of a headland near Fortune Head on the Burin Peninsula in southern Newfoundland ( Canada ) was chosen as the global reference profile ( GSSP ) for the base of the Cambrian . At the same time, the approximately 2.2 km 2 area was placed under nature protection as a natural monument with the name Fortune Head Ecological Reserve .

Subdivision of the Cambrian

According to the current state of chronostratigraphy, the Cambrian is divided into four series with a total of ten levels . Some have not yet been formally named. The status of 2009 is as follows:

At the beginning of the Cambrian there was a large southern continent, Gondwana , which reached with its northern foothills over the equator to northern latitudes. This continent not only included the classic Gondwana continents (Africa, South America, India, Madagascar, Australia, Antarctica, Arabian Peninsula, etc.), but also some smaller blocks that were later welded to the northern continents, such as the small continent Avalonia (parts of Central and Western Europe), the Armorica - Terrang group (parts of Western and Southern Europe), the Tarim Block, the Sino-Korean Craton and the Yangtze Craton. This major continent in the south faced three smaller continents. Laurentia (parts of North America and Greenland), Baltica (northeastern Europe) and Sibiria (Siberia) were all a little south of the equator. Laurentia was separated from Baltica and Gondwana by the Iapetus Ocean. The Tornquist Ocean lay between Baltica and the Avalonia upstream of Gondwana . Sibiria was separated from Baltica by the Aegir Ocean . Isolated from these continents was a small continent, Kazakhstan, which was welded to Siberia in the Carboniferous. The South Pole was located in Lower Cambrian in what is now northern South America. It shifted to North Africa by the end of the Cambrian and Gondwana migrated accordingly across the South Pole. The North Pole was in the sea at the time of the Cambrian.

The beginning of the Cambrian is marked by the so-called " Cambrian Explosion ", during which a large number of multicellular animal groups emerged or appear in the fossil record in a very short geological period. The beginning of the Cambrian thus marked a very important turning point in the history of the earth for the development of the animal world , with which the aeonothem of the Phanerozoic began, that great geological section in which the living world as we know it today developed.

With the exception of bryozoa, almost all modern animal phyla were already present in the Cambrian : sponges (Porifera), cnidarians (Cnidaria), arthropods (Arthropoda), armpods (Brachiopoda), molluscs (Mollusca), echinoderms (Echinodermata) and other smaller phyla of invertebrates , as well as the precursor groups of vertebrates . Many species first developed hard skeletons and shells. This is explained on the one hand as protection against the first great predators, which also appeared at this time, on the other hand through the large supply of calcium carbonate due to a change in the chemical composition of the sea ​​water . The appearance of casings and skeletons made of calcium carbonate, which of course have a much better fossilization potential than just soft tissues, explains why so many animal phyla suddenly appeared in the Cambrian, about whose ancestors nothing is known. Presumably, the splitting ( radiation ) of the multicellular animals (metazoa) must be relocated far back into the Ediacarium.

The following are used as key fossils for the biostratigraphic classification of the Cambrian:

The archaeocyathids , which probably belong to the sponges , built the first larger reefs in the history of the earth. They died out again at the beginning of the Upper Cambrian.

Only marine planktonic algae are known from the Cambrian flora . The land was not yet populated by plants.

The Cambrian in Central Europe

In Central Europe there are very few outcrops or areas in which Cambrian rocks come to the surface. In most areas it is covered by thick younger sedimentary layers and / or has also been metamorphosed during later orogenesis . Europe is made up of different geotectonic plates ( Laurentia , Baltica , Avalonia and the Armorica -Terranes), which at the time of the Cambrian z. T. were very far apart. They were put together in this position only in later orogenes. The facies and fauna content of the Cambrian strata in Central Europe are correspondingly diverse .

In Germany, rocks of Cambrian age have been detected in the following regions: Black Forest, Spessart, North Rhine-Westphalia, Lower Saxony, Harz, Northern Thuringia, Thuringian-Franconian Slate Mountains, Fichtel Mountains, Bavarian Forest, Upper Palatinate Forest, Ore Mountains, Vogtland, Lusatia, etc. a. as well as in some boreholes in northern Germany, with the "Adlersgrund" borehole in the Baltic Sea being particularly important. While the other outcrop areas mentioned all belong to Avalonia and the Armorica Terrang group, i.e. still belonged to Gondwana in the Cambrian, the area of ​​the Adlersgrund borehole in the Cambrian was on Baltica.

In addition, Cambrian bed load is widespread in northern Germany. They come from the Scandinavian deposits, but also contain fossils that have not yet been found in the area of ​​origin, e.g. B. Xenusion .

Anomalocaris from the Burgess slate

Many well-preserved fossils from the Middle Cambrian are known from the Burgess slate in the Rocky Mountains of Canada, especially arthropods , annelids , onychophora , priapulids, in addition to trilobites, sponges and fossils that cannot be assigned to any of the current tribes. The famous Chengjiang fauna community in the Maotianshan slate in China (Yunnan Province) is even older . This fossil deposit is also known for its excellent preservation of soft tissues. Other notable Cambrian fossil sites are the Orsten. Orsten are lime bulbs that are embedded in alum slate . In these lime lumps, chitin skeletons were phosphatised in an early phase of diagenesis and were preserved in three dimensions. These excellently preserved chitin skeletons of Cambrian arthropods and their larval stages could be removed from the rock with weak acid . The term Orsten comes from Sweden , where two such fossil sites are known. In the meantime, an "Orsten" fossil deposit has also been discovered in the Cambrian of Australia .