The Silurian is the third chronostratigraphic system (or period in geochronology ) of the Paleozoic Era in the history of the earth . This period lasted from about 443.4 million years ago to about 419.2 million years ago. The Silurian follows the Ordovician and is replaced by the Devonian system .

The name comes from the Silurians , a Celtic tribe in South Wales , and was coined by Roderick Murchison in 1833. In the past, the Silurian was also called Gotlandium , as rock layers from this system are exemplarily represented on the Baltic island of Gotland .

Roderick Murchison and his friend Adam Sedgwick were already working on the Paleozoic deposits in Wales in the 1830s. Since Sedgwick had named the strata he studied after the Latin name of Wales ( Cambria ) Cambrian , Murchison did the same and named the younger strata he described as Silurian after the Celtic-Welsh tribe. Together, they wrote the work On the Silurian and Cambrian Systems, Exhibiting the Order in which the Older Sedimentary Strata Succeed each other in England and Wales (On the Silurian and Cambrian Periods. Representation of the arrangement in which the older sedimentary layers in England and Wales successive), which appeared in 1835. Later, Charles Lapworth introduced the term Ordovician for those rock layers whose membership of one of the two layer sequences could not be agreed upon , also named after an ancient Welsh tribe.

The International Union of Geological Sciences (IUGS) determined the first occurrence of the graptolite species Parakidograptus acuminatus and Akidograptus ascensus as the basis of the Silurian ; the upper limit (= lower limit of the Devonian) is the first appearance of the graptolite species Monograptus uniformis . The GSSP ( G lobal S tratotype S ection and P oint = Global calibration point for stratotypes ) Silurian is a profile on Dob's Linn in Moffat in Scotland .

Subdivision of the Silurian

The chronostratigraphic system of the Silurian is divided into four series , which in turn are subdivided into a total of eight levels , with the Pridolium series also corresponding to one level.

The arrangement of the continents, which is typical for the Cambrian and Ordovician, changed fundamentally in the Silurian. Already during the Ordovician, Laurentia and Baltica (including the microcontinent Avalonia, which merged with Baltica in the Upper Ordovician ) were moving towards each other , closing the Iapetus Ocean. In the lower Silurian it came to the collision of the two major continental plates and the formation of the Caledonian fold belt . When Laurentia and Baltica merged, the Laurussia continent was created . The Rhine Ocean between Gondwana in the south and Baltica and Laurentia (or after their collision Laurussia) in the north reached its maximum width around the Silurian. In the Upper Silurian, the Hun super terran broke off the northern edge of Gondwana and drifted north towards Laurussia. The Rheic Ocean between the Hun superterran and Laurussia was subducted under the Hun superterran . Between the Hun super terran and Gondwana, the Palaeotethys ocean began to open.

In the course of the Silurian, the oxygen concentration reached values ​​of 14 percent for the first time, and the carbon dioxide concentration fell to below 4000 ppm towards the end of the 24.2 million year epoch . After the Andean-Sahara Ice Age subsided, a warm, temperate climate prevailed with a global average of around 17 ° C, with the meridional temperature gradient (the temperature gradient from the equator to the polar regions) in both the Silurian and the following Devonian regions being flatter than it is today . Reef formation was common at low latitudes. Since, apart from a few short-term and spatially limited glacier formations, the earth was almost free of ice, the sea level remained at a high level and the continental margins were flooded by extensive shallow seas.

Community on a Silurian reef (reconstruction of life)

With a focus on the Wenlock series 433.4 to 427.4 million years ago, there were several extinction events . The marine life forms of the conodonts and various plankton groups such as the graptolites were particularly affected . In the latter, the rate of extinction rose gradually up to 95 percent, before biodiversity increased again over longer periods of time. The main causes of these biological crises are predominantly plate tectonic activities in connection with extremely intense volcanism. The volcanic outgassing caused chemical and climatic anomalies both in the atmosphere and in the oceans and subsequently probably led to a disruption of the short and long-term carbon cycle . At the end of the Silurian, three minor extinction events occurred, including the so-called Lau event , which began in the Ludfordium .

The Ordovician-Silurian border was a decisive turning point. The first jaw-bearing vertebrates (Gnathostomata) appeared. The Placodermi appeared in the Lower Silurian and developed a considerable diversity during the Silurian. The first fossil remains of the bony fish (Osteichthyes) have been found in the Obersilur . They lived together with huge, up to two meters long sea ​​scorpions in the shallow sea. These had already developed in the Ordovician, but had the greatest diversity in the Silurian and Devonian. The corals, represented by the two large groups of Tabulata and Rugosa , formed larger reef structures (e.g. Gotland ). Within the echinoderms (Echinodermata) the bud rays (blastoidea) appeared for the first time. The classes Eocrinoidea and Paracrinoidea became extinct . In the tribe of the Armfüßer (Brachiopoda) the order Trimerellida died out at the end of the Silurian.

The land plants continued to develop and spread. The first vascular plants appeared in the Middle Silurian with Cooksonia on Laurussia and Baragwanathia on Gondwana . Psilophyton is an original land plant with xylem and phloem , but not yet differentiated into root, stem and leaves . They carried out photosynthesis over the entire surface, and the stomata were also distributed over the entire surface. It reproduced via spores and is at the base of the ancient ferns (Psilophytopsida), which, however, had their actual development in the Devonian . The Rhyniophyta and simple club moss plants (Lycopodiophyta) also have their origins in the Silurian. Lichen are also first detected in the Silurian.

The Silurian in Central Europe 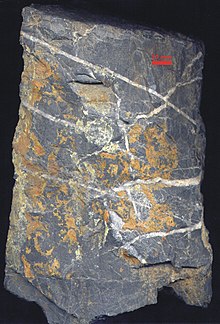 Dark, bituminous clay stones (" graptolite slates") are very characteristic of the Silurian in large parts of Central Europe . Silica and alum shale are also found subordinate. In Bohemia , the Upper Silurian is represented by dark, shallow marine limestone. In the Carnic Alps , the Silurian is also limestone. There and in Bohemia there are numerous volcanic layers.