The paleogeographic positions of Avalonia, Baltica and Laurentia from the Ordovician to the Devonian. 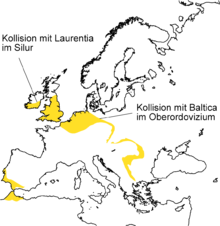 The Rheic Ocean (rare and falsely also Rhea Ocean ) was in the earth's one ocean , that of Unterordovizium to the Lower Devonian existed. At that time it separated the continents Laurentia , Baltica and Avalonia or the large continent Laurussia in the north, which later emerged from these, from the large continent Gondwana in the south. Its former maximum width is not known, but it should have been well over 1000 km. The suture at which this ocean was later closed runs across Central Europe today. The closure of this ocean and the folding of the edge areas gave rise to the variscical .

The name Rheic Ocean was proposed in 1972 by W. Stuart McKerrow and Alfred M. Ziegler ( Rheic Ocean ). However, the authors do not indicate how the name was formed. Due to the two other terms proposed in this work, "Pleionic Ocean" and "Theic Ocean", it can be assumed that they were formed after figures from Greek mythology ( Pleione , Theia and Rhea ). The Titan Rhea was the daughter of Uranus and Gaia .

The Rhine Ocean was formed in the southern hemisphere between the major continent Gondwana in the south and the small continent Avalonia, which broke off from the northern edge of Gondwana in the Lower Ordovician and migrated to the north . In the Upper Ordovician this small continent initially merged with Baltica , a little later in the Lower Silurian the united Baltica / Avalonia collided with Laurentia. Presumably in the course of the Silurian the Rheic Ocean reached its maximum width, which was certainly over 1000 km. In the Obersilur, another block of crust broke off from the northern edge of Gondwana and drifted north, the Hun superterran , which later divided into the European and Asian Hun terranos. The Rheic Ocean was subducted under the Hun superterran during this north drift . A new ocean opened up between the Hun super terran and Gondwana, the Palaeotethys . In the Lower Devonian the European Hun Terrane collided (in Central Europe this is Armorica with blocks of crust that had broken off from the southern edge of Baltica). In Central Europe a narrow ocean basin, the Rheno-Hercynian Ocean, was formed between these crust blocks (Central German Crystalline Zone) and Baltica . The Rhine Ocean ceased to exist in the Middle Devon. In the course of the Devonian and Carboniferous, the western part of Gondwana moved further north. In this area the Palaeotethys has now been subducted under the Hun superterran. In the Upper Carboniferous Gondwana collided with Laurussia in this area, the Rheno-Hercynian Ocean was subducted and the Variscids unfolded. Further to the east, the Asiatic Hun Terrans collided with Baltica and Siberia a little later and at different times. There the Palaeotethys was initially preserved and opened in a wedge shape to the east.