Illustration of Rhea from Meyers Konversations-Lexikon from 1888

Rhea is the daughter of Gaia and Uranos as well as the wife of her brother Kronos , with whom she determines the eternal flow of time and generations. According to a prophecy, it was predicted that Kronos would one day be deposed by one of his children. For this reason he devoured all the children Rhea bore him. When Rhea was pregnant again, she tried to hide Zeus , her newborn son, from Kronos. She hid him in a cave on Crete and had the curetes guard him. Since Kronos knew of the birth, instead of the child, she presented him with a stone wrapped in diapers, which he immediately devoured greedily.

Together with Kronos, she previously begat the deities Hestia , Demeter , Hera , Hades and Poseidon , all of whom were devoured by their father. When Zeus grew up, he overthrew his father Kronos and himself became the ruler of the next generation of gods.

In mythology, Gaia represents the Great Earth Mother , the primordial mother of all gods. Both Gaia and Rhea as well as their daughter Hera give birth to sons who disempower their fathers or at least attempt to overthrow them. The Romans called the deity Cybele . Rhea is therefore sometimes equated with this or with Demeter, almost like a reincarnation of the personified mother goddess or the earth, since Rhea in turn is considered the mother of gods and humans.

There is some evidence that it is always the same goddess in a different form or the same ritual with people in the same functions. In this respect, Gaia, Rhea and Demeter / Hera can be seen as representatives and embodiments of the Great Goddess and the apparent incest and blood acts as indications of matriarchal rituals. This thesis is also supported by the fact that Rhea - like the Great Goddess / Earth Mother in other mythologies - appears or is represented in a threefold form: as Amaltheia , the nurse of Zeus, as Io , his lover, and as the goddess of revenge Adrasteia , also called nemesis .

According to the Orphics , Rhea and her husband Kronos are to rule on the Isle of the Blessed , where the Golden Age continues.

The analytical psychology in the tradition of Carl Gustav Jung applies Rheia be particularly significant expression of the so-called. Mother archetype .

The moon Rhea of Saturn and the Paleozoic Rhea Ocean are named after the goddess .

Rhea in the fine arts 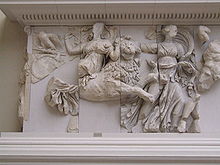 Rhea is usually combined with other gods, such as Demeter. She is often depicted as the mother of the gods, then usually sitting on an omphalos . Some representations also deal with the gigantomachy ; here one finds Rhea on the side of the gods.