This article deals with the Greek god of war; for other meanings, see Ares (disambiguation) . 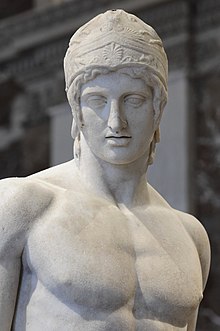 Ares ( ancient Greek Ἄρης ; modern Greek Άρης , spoken Áris ) is the god of terrible war, blood bath and massacre in Greek mythology . He belongs to the twelve Olympic deities , the Olympioi. Although the meaning is not exactly the same, he was later equated by the Romans with their own god of war Mars . But Mars was more respected by the Romans than Ares by the Greeks.

The etymological roots of the name are unclear, Ares probably means the "Corrupter", the "Avenger". The figure of the murdering Ares probably comes from the Bronze Age Thrace , it is also called mythologically as his homeland. But already in the Mycenaean period (1600–1050 BC) it is detectable and widespread on the Greek mainland. It is also possible that he was a fertility god in pre-Greek times and was more similar to his Italian counterpart. 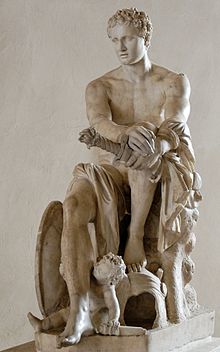 "Ares Ludovisi", copy of a statue around 320 BC. BC, Palazzo Altemps , Rome

As the legitimate son of Zeus and Hera , he was one of the central figures in the Greek world of gods. Ares is described as a raw, savage, unrestrained god of war, who takes pleasure in violence and dug with the wild animals to feast on their blood. While Athena , the goddess of wisdom and cunning, stands for the heroic part of the war, Ares is more of a dark god, a "divine bully". In the battle for Troy, Ares fought on the side of the Trojans, Athene on the side of the Greeks. The two deities even fight against each other when Athena helps Diomedes so that Ares can be wounded. On Mount Olympus he is later treated by Asklepios (god of healing) and lets his sister Hebe bathe him extensively. Ares is aggressive, cruel, merciless and bloodthirsty, often interferes actively in the battles of the mortals and incites their fighting spirit. He enjoys quarrels, looting, blood baths, the sound of weapons clashing, and bones breaking. Ares could do little with the fine arts of the other gods. With his characteristics, he was also unpopular, even hated, by the other Olympic gods.

Although Ares was hated by gods and men as a god of war - even his father Zeus despised him - he was also considered, through the embodiment of the man's trade, as a symbol of male strength and beauty.

Mythologically this is symbolized in his love affair with the goddess of love Aphrodite : Although married to the righteous but misshapen god of the blacksmith Hephaestus , she feels drawn to him and lets herself into a passionate and enduring affair with Ares. The jealous husband, informed of this by the sun god Helios , applies all his craftsmanship and forges an invisible, unbreakable net with which he catches both of them in red-handed . Those so duped are brought before the summoned gods, who are not indignant but break out into insatiable laughter at Hephaestus' expense .

Eros , the god of love armed with a bow and arrow, is seen as the son of Ares and Aphrodite. Furthermore, this connection Anteros (god of love in return) and Harmonia (goddess of harmony) as well as his most important companions, the gods Deimos (god of horror), Phobos (god of fear) and Enyalios (god of struggle) are attributed .

Like other gods, he is said to have numerous love affairs both inside and outside the world of immortals. Among other things, the goddess of envy and discord Eris , the goddess of dawn Eos, and a number of mortals are mentioned. 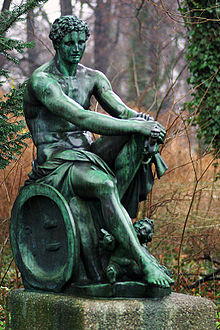 The warlike Amazons , who were also settled near Thrace, were associated with Ares as the progenitor .

Unlike his Roman counterpart, Ares was hardly worshiped, as every war - which the Greeks often waged with one another - was considered a homage to him. The Areopagus is to be mentioned here as a rare and most famous exception of cult places , whose namesake he is, although this is also justified mythologically. Other places of worship can be found in Aetolia , Thessaly or Athens; there was a cult statue of him in the Peloponnesian Hermione .

As an unpopular and reluctantly worshiped god, he was seldom a subject in art, but his Roman equivalent was different . Ares' symbols are: burning torch , dog and vulture as well as sword, helmet and shield typical of a god of war.