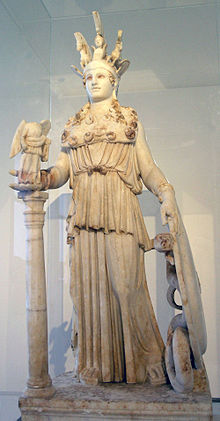 Athena or Athena (honorary title: Pallas Athene ) is a goddess of Greek mythology . She is the goddess of wisdom , strategy and struggle , art , craft and handicraft as well as the patron goddess and namesake of the Greek city ​​of Athens . She belongs to the twelve Olympic deities , the Olympioi. She corresponds to the Roman goddess Minerva .

Their most important sanctuary was the Parthenon in Athens. Several statues of Athena by the hand of the sculptor Phidias stood on the acropolis . The largest statue embodied the Athena Promachos (the "Athena fighting ahead") in full armor. Equally famous was the chryselephantine (work of art made of gold and ivory) colossal statue of Athena Parthenos (the "Virgin Athena") in the Parthenon.

The Latin Athena and modern Greek Αθηνά (Athiná) emerged from the Attic form of the name . In German, in addition to the Attic sound (Athena) , the form Athene, derived from the Ionic, is also used .

The name Athena could not be traced back to an Indo-European root and is therefore considered to be pre-Greek . The meaning of the name is unclear. A clay tablet with linear lettering B from Knossos from the Mycenaean period after 1500 BC. Chr. Calls (a-ta-na-po-ti-ni-ja) , wherein a-ta-na a theonym or a toponym could act. The word component po-ti-ni-ja is identified with the ancient Greek πότνια (pótnia) and means “mistress, mistress” or “ruler”. The expression a-ta-na-po-ti-ni-ja has long been translated as "Mistress Atana", and it was believed that "Atana" was a castle goddess worshiped in several places. An alternative translation is "Mistress of Athens", which would mean that Athens is the place of origin of the goddess and that she was already closely associated with the city at that time. 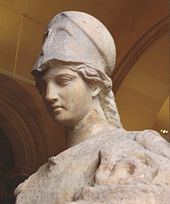 Well-known epithets of Athena in Greek are:

Athena is the patron goddess and namesake of Athens. She is considered the goddess of cities, wisdom and struggle, as well as war tactics and strategy; she acted as palace and patron goddess of the Mycenaean rulers. Athena was patron of the arts and sciences ; as the guardian of knowledge, she also protected spinners , weavers and other craftsmen. But she was also venerated in other cities, for example in Roman times in the Pamphylian Side , where she was also the patron goddess of the city council. This is documented by a bronze coin on which Athena throws a voting stone into a ballot box.

In the two greatest epics of Greece, the Iliad and the Odyssey of Homer , Athena is the patron goddess of Odysseus . In the Trojan War , Athena “fights” on the side of the Greeks. Then she accompanies Odysseus on his dangerous adventures. 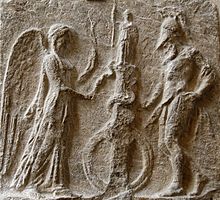 Nike and a warrior around the Palladion

According to Hesiod's theogony , the oldest and most widespread mythical version of the descent and birth of Athena, she was a daughter of Zeus and Metis . Zeus had devoured Metis, who was pregnant with two children, because Uranus and Gaia had prophesied to him that a daughter would be equal to Zeus, but that a son would overthrow him. When he suffered from a great headache afterwards, Hephaestus smashed his head on Zeus' command (which he survived as the father of gods). From this arose Athena in full armor. It was therefore seen as an embodiment of the spirit (as from the head of Zeus = head birth; see derivation of the name) and thus of wisdom and intelligence. The brother of Athena remained unborn and unnamed in Metis (or Zeus). The Hephaestus episode is not available in all versions.

In a particular version of the myth, Athena in armor sprang from Zeus' mouth, forcing him to release her entwined siblings. As the patron goddess of Athens , she was therefore often depicted in full armor.

She received his Aigis from her father as a loan, which adorned the head of the Gorgon , later called Medusa , the Gorgoneion . This face also adorned her shield. Her foster father was the sea god Triton , with whose daughter Pallas she grew up. Athena accidentally killed them during a fighting game with javelins. In memory, Athena created a statue, the Palladion , and took the name of the slain: Παλλὰς Ἀθηνᾶ - Pallas Athēnâ .

Like many Greek deities, Athena was extremely easy to offend: She transformed Arachne , who claimed to surpass the goddess in weaving , into a spider . The painter Diego Velázquez depicted the contest between Athena and Arachne in his monumental painting The Spinners .

She never entered into a love affair, hence the nickname Parthenos "the virgin" (compare also Artemis ). But at the request of her friend, the titan Prometheus , she breathed knowledge and wisdom into the people.

According to the myth, Poseidon and Athena fought over the patronage of a city. So they held a competition: whoever gives the city the more useful gift has won. Poseidon gave a well (or a spring), but it only donated salt water or, in other versions, the horse; Athena's gift was the olive tree and with it its wood and fruits. So Athena became the patron goddess of the city, which since then bears her name: Ἀθῆναι - Athens. The holy olive tree stood exposed for a long time on the area of ​​the Acropolis and, according to legend, it is said to have broken out again after the temple was destroyed during the invasion of Xerxes .

Athena and the owl

Tetradrachm (after 445 BC)
Obverse: head of Athena
Reverse: Owl with olive branch

According to Homer, Athena is γλαυκῶπις glaukōpis , which is mostly translated as "owl- eyed" ( γλαῦξ "owl", ὤψ "eye"). There are several interpretations for the attribute glaukōpis .

It has been argued that if Homer wanted to point out big eyes, he could have called Athena - like Hera - at least occasionally "cow-eyed". But he always only calls Hera and never Athena. Then one might ask why Homer used different attributes for the two goddesses, if the meaning is supposed to have only been “wide-eyed” in each case. This consideration supports the alternative interpretations "sharp-sighted" and "bright-eyed".

In any case, the owl was symbolically assigned to Athena and also appeared on the Athenian coins - hence the saying, which has been known since ancient times, to carry owls to Athens for "doing something superfluous". Part of this Athenian coin can still be seen today on the Greek 1 euro coin .

The little owl in particular was considered a symbol of Athena and a bird of wisdom . Its scientific name is Athene noctua , "nocturnal Athene".

Head of a statue of Athena ( Liebieghaus , Frankfurt am Main )

In the classical century of German literature (for example by Friedrich Schiller ), the Latin name "Minerva", which was more common at the time, was often used for "Athena", as was the case in Hegel's famous quote on the fact that the knowledge of social conditions often only follows events: " [...] Minerva's owl does not begin its flight until dusk falls. ”(Cf. Basics of the Philosophy of Law .)

Sachsen-Weimar used the Pallas Athene as a coin image on the Pallastaler , which was fully minted in 1622 and 1623 during the Kipper and Wipper inflation.

The National and Kapodistrian University of Athens , the Max Planck Society , the University of the Federal Armed Forces in Munich and the Technical University of Darmstadt have the head of Athena in their logo.

The German-Greek Athene Primary School in Berlin ( European School ) has had this name since 2002.

A 5.5 meter high statue of Pallas Athena stands in front of the Austrian parliament building in Vienna . In the courtyard of the south campus of the Karlsruhe Institute of Technology (formerly University of Karlsruhe ) there is also a statue of Athena with a lowered spearhead, with which the university commemorates those who died in the war. Since 1957 such a statue has also stood in front of the Wilhelm-Dörpfeld-Gymnasium in Wuppertal , which is based on ancient languages .