The Pallastaler , also spelled Pallas-Taler , is a Reichstaler from Sachsen-Weimar , which was minted in 1622 and 1623 under Johann Ernst and his five brothers (1622–1626). The obverse shows the standing Saxonia as the Greek goddess Pallas Athene , the reverse the overall coat of arms with the inscription AFTER THE OLD SCRAP VND KORN to distinguish the thaler from the Kippertaler .

After Saxony-Weimar had stopped minting tipper coins ( land coins ), the duchy was again minted according to the Imperial Coin Order of 1559. The first full thalers, the so-called Pallastaler, which were already paid out in Reinhardsbrunn in 1622 , were Reichstaler with the inscription AFTER THE OLD SCRAP VND KORN on the back. With this inscription, the full value of the coin should be expressly documented, since in Thuringia and Saxony , tipper coins were still minted in 1623. - See kipper mints of Kursachsen . It is also noticeable that the inscription was stamped in German, as was the case with coins from other minters after periods of bad money . It was not until 1817 that the German inscription became common on the Wettins' circulation coins .

Note: The completely identical inscription to denote the quality was already used on coins of Duke George of Saxony (1500–1539) during the time of the Saxon coin separation . From 1530 to the end of 1533 Duke Georg had the mints of Freiberg , Leipzig and Annaberg minted according to the previous quality, although Elector Johann von Sachsen (1486 / 1525–1532) had reduced the fineness of his coinage in the mints of Zwickau and Buchholz . 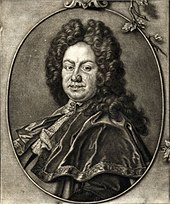 JD Köhler's explanation of the Pallastaler also refers to the time when coins were forged .

The full-fledged Pallastaler were still minted in the tipper and wipper era . With this, according to Köhler, the “ Weimar Line is the beginning of making good money again […]”. Before that, during the time of coin falsification, it was stipulated in Saxony-Weimar with a contract dated February 13, 1622 that “as long as the use of coins, as they call it lightly, [works], they will add 30,000 guilders annually to the Weimar church and Schloss-Bau [use]. "

The historian and numismatist Johann David Köhler assessed this contract in terms of the devastating consequences of the tipper and luffing truck inflation :

“I would not have liked to get any of this illegal profit [because] the Reich statutes [...] forbid turning the coin shelf into a profitable trade [...]. Because of the bad money, from which the indicated large profit was drawn, many thousands of other people have suffered damage. "

Note: Even the emperor played a part in the severe crisis in German coinage , which peaked between 1620 and 1622, with the minting of kipper coins .

The so-called Pallastaler comes in two variants with the year 1622 and 1623. The wreath is missing on the obverse of the thaler from 1622. The silver thaler struck in the imperial coin foot has a diameter of 41 millimeters and weighs approx. 29 grams.

The description concerns the taler from 1623 (see picture above).

The obverse shows the standing Saxonia as Pallas Athene with a helmet and lance on which there is a flag. With her left hand she holds the shield with the coat of arms of the Duchy of Saxony . In the coin field there is a laurel wreath , on top the divided year 16 - 23.

On the back there is the six-fold helmeted coat of arms with 17 fields and the heart shield of the Duchy of Saxony, above a small imperial orb , below divided the mint master mark G - A of the mint master Gabriel Andrae of the Weimar mint .