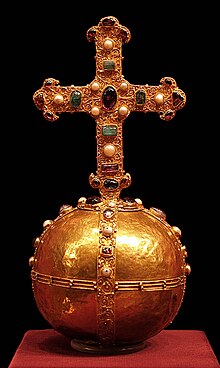 The orb of the Holy Roman Empire

An orb ( latin globe Cruciger of globus "ball" crux "cross" and gerere "carry") is a rule-mark in the form of a globe having an attached cross.

Orb of the Holy Roman Empire

A first reference to an orb that was handed over is to be found shortly before the coronation of Henry II by Pope Benedict VIII on February 14, 1014. Benedict VIII and the Roman citizenry went far to meet Henry II and gave him a solemn reception before Rome, whereby the Pope presented an imperial orb made of gold, set with precious stones and adorned with a golden cross, which he had previously made for the occasion. Heinrich II passed this orb to the Cluny monastery . Abbot Odilo von Cluny had celebrated Christmas with the court on December 25, 1013 in Pavia and was also present at the imperial coronation.

An imperial orb is also in 1191 at the imperial coronation of Henry VI. presented to the new emperor. The shape of the cross and the filigree ornaments suggest that this orb could not have been created much earlier. On the other hand, there is no evidence that the orb of the Holy Roman Empire , which is now kept in the treasury in Vienna, was presented to the emperor. The lexicon of the Middle Ages writes: "The traditional coronation insignia, including scepter and orb, were freely selected from the hoard."

Imperial apples from other monarchies

For the imperial orb of the Austrian Empire, see Austrian Imperial Crown .

The imperial insignia of the Danish kings are kept in the basement of Rosenborg Castle.

The orb of the Norwegian imperial insignia was made in Stockholm in 1818 and is made of gold-plated silver. The globe is divided into two halves by a gold ribbon decorated with roses. A similar band divides the upper hemisphere into two parts. There is a miniature imperial orb with a chased Latin cross on it. See also: Reichsschwert (Norway)

The Prussian orb in the form of a blue enameled ball with a gold ring and gold cross is adorned with 50 faceted stones and 36 rubies and was created in 1700 as a coronation insignia for the coronation of King Frederick I in 1701.

The imperial insignia of the Swedish kings are exhibited in the treasury of the Stockholm Palace .

The Hungarian imperial orb is kept with the crown of St. Stephen in the dome of the Hungarian parliament building in Budapest . On the globe there is a patriarchal cross instead of a Latin cross.

In heraldry , the imperial orb is a common figure and is found very scattered in the coats of arms . It is represented by a sphere with an attached cross . A metal band is stretched around the ball like an equator and in the middle the band continues upwards so that it ends in the cross. Symbolizing secular power, this insignia was presented to the emperor in the German-speaking area by the stewardess as a special official . The Count Palatine adopted this symbol in their coat of arms. The Bavarian, Rhenish and Electoral Palatinate Count Palatine were probably the best of the Holy Roman Empire of the German Nation. The orb is a little more common in the coat of arms. As an insignia, the Prussian eagle holds the symbol on the left and the scepter on the right in its muzzle. Repetition also in the coat of arms of the Kingdom of Prussia . Here the orb is blue with a golden cross on the ring.

The Reichstaler, especially the Saxon Reichstaler of the Albertine and Ernestine line, and the Wechseltaler have a small orb on the front in the inscription above the head of the ruler. (See also: Mint Dresden # The coins of the mint as well as Erbländischer Taler and Dreibrüdertaler (Kursachsen) ). Mainly in Saxony the coinage was marked according to the imperial coinage order.

The good groschen at 1 ⁄ 24  Reichstaler was also called apple groschen because of the large Reichsapfel .

The very rare golden coin of Electoral Saxony, the imperial guilder at 21 Groschen (1584) , a minted bill coin, shows a large imperial orb, which is very atypically covered with the Saxon state coat of arms.