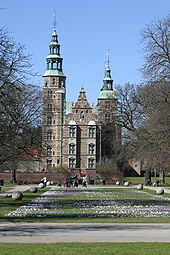 Rosenborg Castle (Danish Rosenborg Slot ) is located on the edge of the royal garden Kongens Have in the Danish capital Copenhagen .

The history of Rosenborg goes back to 1606, when Christian IV bought several pieces of land in front of the north-eastern ramparts and had a pleasure and kitchen garden laid out there. A two-story summer house, which was completed in 1607, was then built in this garden. This original building can still be seen today in the south wing of the palace.

Rosenborg's northern wing was built between 1613 and 1615 and a third floor and three towers were added between 1616 and 1624. From then on, the name Rosenborg was used. With the tower on the east facade built by the royal master builder Hans van Steenwinckel the Younger in 1634, the current shape was finally achieved. With red bricks , decorations made of gray sandstone and its slim proportions, Rosenborg Castle is based on the style of the Dutch Renaissance .

Rosenborg was used as a royal residence until 1710. In 1833 Frederick VI decided. to convert the castle and the collections stored there, once a cabinet of curiosities and managed by Lorenz Spengler from 1771 to 1807 , into a museum that was opened in 1838. It is called the Chronological Collection of the Danish Kings (Danish: De Danske Kongers Kronologiske Samling ), here, among other things, the Danish crown jewels are exhibited.