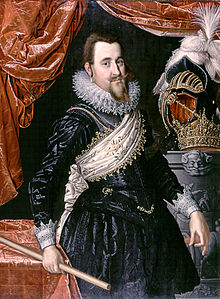 Christian IV. (* April 12, 1577 at Frederiksborg Palace ; † February 28, 1648 at Rosenborg Castle , Copenhagen ) was King of Denmark and Norway from 1588 to 1648. During his long reign he tried repeatedly, unsuccessfully, by military means - especially in the Thirty Years' War - to shape the Danish-Norwegian state into a great power . As a domestic political reformer, he laid the foundation stone for the establishment of absolutism and left behind the cities of Kristiansand , Kristianstad and Glückstadt as well as Christianshavn , today a district of Copenhagen , through his lively building activity . 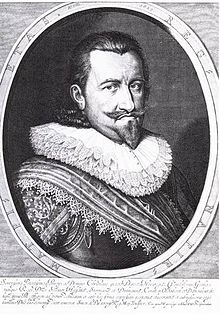 Christian IV was the eldest son of King Frederick II of Denmark and Norway and his wife Sophie of Mecklenburg , a descendant of Frederick I of Denmark .

After the death of his father in 1588, when he was eleven, he became nominally king. His mother ran government affairs with representatives of the Reichsrat while he was not of age . She was guardian in the duchies of Schleswig and Holstein , the government council with the imperial council guardian in Denmark. The relationship between the two guardians was tense or even hostile.

With the assumption of government on the date of his majority on August 17, 1596 and his solemn coronation on August 29, 1596, he ushered in an era of reforms. So he carried out a national armament, always keeping an eye on the future direction of Denmark as a military power, and had new fortresses built throughout the empire. He also set up a representative courtyard and promoted seafaring. The symbol for the latter was a sea voyage made by the young king in 1599, during which he circled the North Cape and went ashore in Lapland . He also financed three expeditions between 1605 and 1607 to clarify the fate of the Scandinavian settlers on Greenland .

In 1611 the Kalmar War broke out between Denmark and Sweden . Christian managed to overcome the weakness of the Swedish King Charles IX. to take large areas from Sweden and in January 1613 in the Treaty of Knäred to get all of Finnmark . The domestic political goal of setting up a standing army in the course of this war failed due to the resistance of the Danish nobility.

After the Kalmar War, Christian turned to northern Germany. He tried to gain territory on the Elbe and to give two of his sons the secularized dioceses of Bremen and Verden . Because his attempts to submit to Hamburg failed, he founded Glückstadt in 1617 in order to gain control of the Elbe trade and at the same time a North Sea port and base for military operations in the south of his empire. To attract able, wealthy merchants, he gave Dutch Remonstrants and Mennonites, as well as Portuguese Jews, religious freedom . Glückstadt received city ​​rights as early as 1617 .

In addition to founding Glückstadt and attempting to gain control over Hamburg or at least the Elbe customs , Christian IV also promoted the merchants. In 1616 he granted the first Danish East India Company the privileges.

In 1617 the king issued regulations against witchcraft and black magic , which subsequently led to increased persecution of witches in Denmark, Schleswig-Holstein, Norway (especially among the Sami population in Finnmark ) and Iceland.

In 1618 Christians introduced a new type of coin, the Corona Danica , because no profit could be made from the previous mark without devaluation.

After the Thirty Years' War broke out in 1618 , the Danish king invited the Protestant dukes of Lüneburg, Lauenburg and Braunschweig, the envoys from England, Holland, Sweden, Brandenburg and Pomerania as well as the expelled Winter King to the Segeberg Castle in early 1621 to revive the Protestant Union . In 1625 he then tried successfully to be elected as district bishop of the Lower Saxon Empire . After defeats against Tilly in the Battle of Lutter on August 27, 1626 and Wallenstein , Christian was able to secure his territories in the empire in the Treaty of Lübeck of 1629. In the following years, the Danish king tried above all to curb the growing Swedish influence under Gustav Adolf . This led to the Torstensson War in 1643 . This ended in 1645 with the Peace of Brömsebro , in which Denmark had to surrender large areas to Sweden.

Christian's last years of reign and life were determined by the transition of rule in the Baltic Sea region to Sweden and the growing influence of the nobility in the interior of Denmark. Above all, the husbands of his daughters from his marriage to Kirsten Munk, the so-called son-in-law party, gained great power.

His grave is in the chapel of Christian IV in Roskilde Cathedral . There is also a life-size statue of Christian, created by Bertel Thorvaldsen .

Rosenborg Castle in Copenhagen, one of Christian IV's numerous buildings.

Christian IV left a rich cultural legacy through his lively building activity. In addition to the founding of the cities of Kristiansand , Kristianstad, Kristianopel , Christianshavn and Glückstadt , he also suggested the construction of the castles of Frederiksborg , Rosenborg and Halmstad . He staked out the construction site of his Glückstadt palace himself after initially having the royal court built there.

The construction of the later fortress Christianspries in today's Kiel from 1632 can also be traced back to his instigation. In return, Christian IV bought the surrounding estates Bülk , Seekamp and Knoop , as well as the parish Dänischenhagen , which was therefore called Christianshagen for a few years.

From 1613 to 1616 he had a relationship with Karen Andersdatter († 1673 in Copenhagen), from whom at least two children emerged:

The fatherhood of Christian's last child must be questioned, since at that time Kirsten Munk already had a relationship with the Rhine Count Otto von Salm , who was in Christian's service , for which she was later banished to her property as a punishment.

After the separation, the king began a relationship with Wiebke Kruse (* approx. 1605 in Holstein ?; † April 28, 1648 Copenhagen; reburied in Kølstrup, Funen), who served as a nanny at the court of Ellen Marsvin and whose origin has not yet been proven . She probably comes from Holstein, as her brother Hinrich Kruse, who can be verified, was a bailiff in Krempe and Segeberg and u. a. 1637 donated the altar of the church in Schenefeld . She had two children with Christian:

As a result of family marriages, Frederick I of Denmark and his wife Anna of Brandenburg are Christian's great-grandparents twice.