The title of this article is ambiguous. Further meanings are listed under Lapland (disambiguation) . 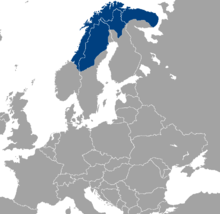 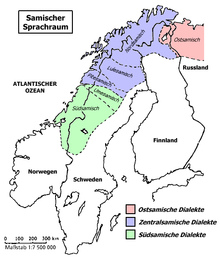 Lapland on a map of the 17th century ( Joan Blaeu , Atlas Maior )

Kebnekaise , the highest mountain in Lapland and all of Sweden (2,111 m) 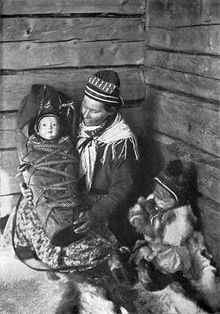 Mother with toddler in one of the regional Sami traditional costumes, 1917

Lapland ( Finnish Lappi , Swedish and Norwegian Lapland , Russian Лапландия Laplandija ) is a landscape in Northern Europe , the delimitation of which is drawn differently. It is often used to describe the part of Fennos Scandinavia north of the Arctic Circle .

Lapland has the greatest expansion when equated with Sápmi , the settlement area and cultural area of the Sami - the indigenous people of Lapland. However, this view is not commonly used. According to this definition, the area is 388,350 km². This area has a population of 2,317,159, of which only around 70,000 are Sami. According to this definition, Lapland is almost 10% larger than Germany. However, if you only take the part of Scandinavia, Finland and the Kola Peninsula north of the Arctic Circle - as is usually the case - the area is only around 260,000 km². If the term is only related to the historical Swedish and the existing Finnish province , the area is 217,193 km². Regardless of the definition, the population density is around 2 inhabitants per km², with the vast majority of inhabitants living in cities on the coasts. Outside the cities, the population density is therefore in fact close to 0.

In order to avoid the limitation problem, the term north cap is often used today, which is clearly based on the corresponding provincial borders of the four participating countries.

The Sámi are an indigenous people who used to be called "Lapps". Lapland never had its own statehood and is now divided between the four states of Norway , Sweden , Finland and Russia . In the growing national consciousness of the indigenous people, the Sami flag can be seen more and more frequently today. However, the Sami are only a minority of the population, making up around 4% of them.

The very sparsely populated landscape rises gradually from the Baltic Sea to the west over gently sloping taiga areas and reaches heights of over 2,000 meters in the Skanden ( Kebnekaise , Sarek , Akka ) on the Swedish-Norwegian border . The Kola Peninsula is mountainous in the western part and reaches 1201 meters in the Chibinen Mountains.

The largest cities are Kiruna (iron ore mining), Rovaniemi , Jokkmokk , Arvidsjaur , Tornio , Pallastunturi , Malmberget , Gällivare , Inari and Kirkenes . If the Kola peninsula is added to Lapland, then Murmansk is the largest city in the entire region.

The climate ranges from cool-temperate on the Norwegian coast, warmed by the Gulf Stream , to cold-temperate in the coniferous forest areas to subpolar in the fells and tundras of the northernmost regions. Due to the Gulf Stream, the ports of Norway (e.g. Narvik as the oldest ore loading port) are ice-free all year round, while the Gulf of Bothnia freezes over in winter. The climate in Lapland is sometimes very extreme: in the same place it can fluctuate between plus 30 and minus 30 degrees Celsius over the course of the year. Since Lapland is in the west wind zone, the west side of the mountains has much more rainfall than the east side ( windward and leeward ). The further east you go, the drier and more continental the climate becomes. The current climate change ( global warming ) is taking place twice faster in Lapland than in areas to the south and will therefore bring about drastic changes. The partially occurring permafrost soils already show a clear trend towards downsizing.

Except for the mountains above 600 m asl and the extreme north, the boreal coniferous forest is predominant with the spruce on fresh soils and the pine on drier soils. Hardwood - there are no deciduous trees in Lapland. On softwood deciduous trees you can find birch , mountain ash , poplar , aspen and willow , whereby the birch is by far the most common deciduous tree in the coniferous forests. As a forest tundra, the mountain birch (a subspecies of the downy birch ) forms the transition from the taiga to the mountain tundra ( Fjäll ) up to about 800 m asl and the tundra in the northernmost parts of Finnmark . In the fells and tundra , grasses and dwarf shrub heather dominate , mixed with moss and lichen . The cloudberry (fin. Lakka , Swedish. Hjortron ), which grows in the numerous moorland areas, is a popular dessert among the inhabitants of the country and in Finland in the form of lakkalikööri is very popular.

The fauna of Lapland is typical of the cold temperate and polar climatic zone , so that amphibians , reptiles and insects are only present in small numbers . The bird world is particularly rich with many wader , raptor and songbird species (typically the spur bunting ). Like insects, ( migratory ) birds appear in large numbers at the favorable season, depending on the species. Among the mammals , the first thing that catches the eye are the large herds of semi-domesticated reindeer , which visit the forest areas in winter and the mountain regions in summer. All of Lapland's reindeer are Sami-owned. Other non-endangered mammals are the lemming , moose and brown bear . The predators wolf , wolverine and lynx are rare in Lapland. This also applies to the arctic fox , which, due to global warming, is facing increasing competition from the red fox that immigrates from the south.

Lapland has large deposits of mineral resources, especially iron ore in Sweden (e.g. Kiruna ), copper in Norway, and nickel and apatite in Russia. In addition, forestry in particular plays the largest role in the economy of the Swedish and Finnish areas of Lapland. A specialty is the traditional Sami reindeer herding.

The national parks and nature reserves of Lapland together form the largest complex of protected areas in all of Europe . They are among the largest remaining wilderness areas in Europe.

The Siida Museum, dedicated to the history and culture of the Sámi, was opened in Inari in 1998 .

The Swedish writer Ernst Didring dedicated his main work Malm (ore) to railway construction in Sápmi and iron ore extraction. The German artist Peter Gabrian repeatedly dealt with the landscape in northern Finland and the midnight sun in his paintings.

The volume On Foreign Paths in the series Karl May 's Collected Travel Stories contains the short story Saiwa tjalem , which takes place in Lapland.

Swedish Lapland is crossed by three European highways. The E 45 begins in Karesuando on the Swedish-Finnish border and even leads south to Agrigento on the south coast of Sicily. In the Swedish section of the E 45 (to Gothenburg), this is also Reichsstraße 45 (Rv 45, Inlandsvägen ) - the only north-south alternative to the E 4 along the Baltic Sea coast. The E 10 (Nordkalottenvägen) , the Rv 95 ( Silvervägen ) and the E 12 (Blåvägen) cross Lapland in an east-west direction. The traffic density is very low and the greatest risk of accidents is encountering reindeer or elk .

The ore railway (Malmbanan) runs through the northern part of Lapland coming from Luleå via Boden (connection to Stockholm and Gothenburg), Gällivare , Kiruna and Riksgränsen towards Narvik . The Inlandsbanan also begins in Gällivare and leads over 1300 km south to Kristinehamn on the banks of the Vänern. Today this route is used almost exclusively for tourist purposes. The Norwegian Nordland route ends in Bodø and the Finnish railway ends in Kemijärvi or Kolari.

Attractions in Norway include:

Sights in Finland are:

The sights in Swedish Lapland are: