The cloudberry ( Rubus chamaemorus mentioned), also cloudberries, Mult berry, cloudberry, blackberry or sump Torfbeere is a plant - type of the genus Rubus . She is the only representative of the subgenus Chamaemorus and belongs to the subfamily of Rosoideae within the family of the rose family (Rosaceae). The cloudberry is found in North America, Europe and Asia. It is very rare in Central Europe. There are no occurrences in Austria and Switzerland . The very small occurrences in northern Germany are strictly protected. Awareness grew with the depiction of the cloudberry on the Finnish 2 euro coin . This plant species is a symbol of Lapland .

The botanical name comes from the Greek : chamai = "on earth" and mōros = " mulberry / blackberry ", meaning "ground blackberry". The term "Molte-" is common in the Scandinavian languages ​​and came into German via Danish . The term is related to the word “melt” and refers to the very soft fruit when it is ripe. In Norwegian it is called similar to Danish and German, in Finnish it is called Lakka , in Northern Finland it is also called Hilla . In Swedish they are called Hjortron and in Estonian Murakas . In English the name is cloudberry or Bakeapple use, in French Plaquebière or Chicouté . There are also numerous regional names. 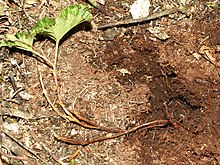 Male flower of the cloudberry with stamens

Female flower of the cloudberry with carpels and styles (stylodia) 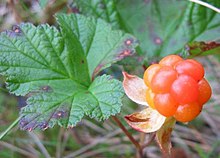 A handful of ripe cloudberries

The cloudberry is a perennial plant and reaches heights of between 5 and 25 centimeters. In company with dwarf shrubs such as bog berries and swamp porches , stature heights of up to 45 cm are observed. Upright, unbranched, non-woody and thornless stems sprout from an underground basic axis . The alternate leaves are weakly palmate, five- to seven-lobed and serrate on the edge. At the base of the leaf there is a stipple a few millimeters in size . The leaves are up to 20 centimeters wide. The foliage turns red in autumn.

From mid-May white, occasionally reddish, individually terminal flowers with four to eight, usually five, petals and sepals each form. They are short-lived and quickly defoliated when it rains. The plant is dioecious dioecious . The female flower has numerous greenish carpels , the male flower has many stamens with yellow anthers. The fertilization is performed by insects . The flowering time lasts until the end of June, the ripening of the fruits is correspondingly inconsistent. Collective drupes with a size of up to 2.5 centimeters, consisting of up to 25 drupes , ripen by July . The ripening fruits are initially greenish and completely enclosed by the sepals, then pale red, finally yellow-orange. If there is little sunlight, the red stage is skipped. Once the outer bracts roll away from the fruit that is ripe cloudberry. Then it is very soft and accordingly difficult to pick. Therefore, unripe fruits are often picked, which then ripen in the sun.

Distribution area of ​​the cloudberries

The cloudberry's main distribution area is in boreal and circumpolar zones between 78 ° and 54 ° north latitude in the four northern European states of Russia , Sweden , Finland and Norway as well as in Scotland and England . Individual occurrences can also be found in Western, Central and Eastern Europe as well as somewhat more frequently in the Baltic States than ice age remains, so-called glacial relics . In Greenland it reaches its northernmost point of distribution. The southernmost occurrence is in the Sudetes , both in Poland and in the Czech Republic , in the Giant Mountains .

In North America it grows from Canada (in the sparsely populated forests north of the city of Québec and on the Magdalen Islands in the Saint Lawrence River ) to the USA ( Alaska , Maine , Minnesota , New Hampshire , New York ), but in many cases it is already threatened. It is also native to Siberia and northern Japan .

In Germany, the species is only found in Lower Saxony in moor areas on the Weser and Elbe , for example in the Plackenmoor , where the populations are mostly threatened by encroachment. The cloudberry is strictly and particularly protected in Germany according to the Federal Species Protection Ordinance.

The cloudberry grows in rain bogs on raised peat moss peaks (bulte) and on drier rain bog edges, in intermediate bogs and heaths up to an altitude of around 1400 meters above sea level. In Scandinavia it is also found in sparse forests and on the edges of forests. The cloudberry can withstand great cold in winter, but is very sensitive to cold spells after the start of its vegetation phase, so that in southern locations a few beautiful sunny days in April are already fatal, which is why it only grows there in partial shade. It thrives on acidic soils (pH value between 3.5 and 5.2), tolerates temperatures as low as −38 ° C and light to moderate forest fires, but is sensitive to salts . In rain bogs, the cloudberry is part of the “colorful peat moss society ” ( Sphagnetum magellanici ) and here is in company with peat mosses such as Sphagnum magellanicum and cranberries ( Vaccinium oxycoccos ). In Central Europe it occurs in societies of the class Oxycocco-Sphagnetea.

The cloudberry is a robust plant, but like many rose plants, it is susceptible to, among other things, blackened soot and stinging spot disease .

The cloudberry is a forage plant for a number of butterfly caterpillars, for example those of the lesser night peacock butterfly ( Saturnia pavonia ). Various animals appreciate the berries as food. It is reported from Yakutia that brown bears willingly travel great distances on the tundra to get hold of the fruit.

The cloudberry reproduces mainly vegetatively via its rhizome and thus forms extensive colonies of same-sex plants in its growing areas. In contrast, propagation by seeds is of secondary importance. Unlike many Rubus species, the cloudberry is not self-pollinating. The dioecious plant ( hermaphroditic plants are only rarely found) requires a plant of the opposite sex for fertilization. Ingestion of the fruit by birds and other animals promotes the spread of the indigestible seeds through their excretion. The cloudberry is a cold germ . Your seeds require a 270-day stratification and then germinate only at temperatures above 18 ° C. Cloudberries are octoploid , which means they have an eight-fold set of chromosomes .

Use as a food

The cloudberry is rich in vitamins and trace elements and is therefore a valuable food.

The cloudberry has a bitter, sour taste when eaten raw. It is often used to make jam or jelly , or it is used to flavor desserts. In Sweden they are eaten frozen with sugar (Björnkulla) , in Finland with what is known as Leipäjuusto (“bread cheese”, a hard, dough-like cheese dish) and lots of sugar. Also in Finland they are used to make a liqueur called Lakka ( Lakka is the Finnish name of the cloudberry), in Canada the fruit is used, among other things, to flavor a beer specialty and in Sweden it is used to make vinegar .

The cloudberry yield is low, making it the most expensive of the wild berries. In Finland, collectors are paid at least six euros per kilogram.

Even today, especially in Norway, the demand as a delicacy is greater than the supply (Norway imports 200 to 300 tons of the fruit from Finland annually), it is still a pure wild fruit. Since the mid-1990s, the Norwegian government, in collaboration with Finnish, Swedish, Scottish and Russian bodies in the Northberry research project, has endeavored to cultivate the cloudberry as an agricultural crop. The first optimized plants (male varieties Apolto and Apollen , female varieties Fjellgull and Fjordgull ) have been sold to agriculture since 2002.

Use as a medicinal herb

Because of its high ascorbic and benzoic acid content (the latter makes it extremely easy to store), the fruit was valued by Nordic sailors and American Eskimos as a remedy for scurvy .

The leaves of the cloudberry are used against diarrhea because of their tannic acid content . The plant also contains diosgenin , a steroid and precursor of the female hormone progesterone , which is used against gout and rheumatism . 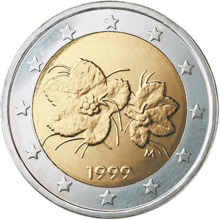 Cloudberry as a motif on the Finnish 2 euro coin