The Magdalen Islands ( French. Îles de la Madeleine , English Magdalen Islands ) are a Canadian group of islands located in the southeast of the Gulf of Saint Lawrence . Although the archipelago is geographically much closer to Prince Edward Island and Nova Scotia , it forms part of the province of Québec . This fact is mainly due to the ethnic origin of its inhabitants, because like the majority of the population of the province of Québec, most of the islanders are French-speaking Canadians .

The Magdalen Islands cover an area of ​​around 206 km² and consist of the nine main islands Île-du-Havre-Aubert, Île-du-Cap-aux-Meules, Île-du-Havre-aux-Maisons, and Île-aux-Loups , Île-Shag, La-Grosse-Île, Île-de-la-Grande-Entrée, Île-Brion and the Île-d'Entrée, as well as from numerous smaller islands. The uninhabited and somewhat remote rocky island Le-Corps-Mort forms the westernmost part of the archipelago. The Rochers aux Oiseaux are located 20 kilometers away in the northeast .

The first European documented to visit the islands was Jacques Cartier on his first expedition to America in 1534. However, settlement of the islands did not begin until after 1755, when French-speaking Acadians , fleeing from British troops, settled on the archipelago. The reason for their flight was the deportation of the Acadians , with which the British colonial government of Nova Scotia intended to transfer all French-born residents of its sphere of influence to other English colonies. In fact, most of the Acadian population was covered by this deportation measure and only a minority managed to evade British persecution. Some refugees ended up on the Magdalene Islands, and since their British persecutors did not get to the islands during the Seven Years' War , the archipelago could become a permanent asylum for them. The Acadian origin of the islanders has not been forgotten , and many Madelinots , as they are called in French, define themselves as Acadians in addition to their Quebec identity.

After France had to cede almost all of New France to Great Britain with the Peace of Paris in 1763 , the Magdalen Islands were initially administered as part of the British colony of Newfoundland . In 1774 the archipelago was reassigned to the former British colony of Quebec with the Quebec Act . Since then, the Magdalene Islands have belonged to this territory, from which the Canadian province of Québec later emerged, which was not geographically congruent.

In the past, the islands were feared as an obstacle to shipping. Between 500 and 1000 ships ran aground or crashed here, mostly in the 18th and 19th centuries. Descendants of those who survived at that time still live on the islands today.

The 2001 Canadian census found the island's population to be 12,824, up from 13,991 people counted in 1991. In 2005 a population of 13,059 was determined, but this is likely to be falsified because it also included many lobster fishermen who did not have their permanent residence on the islands.

The vast majority of the islanders are French-speaking, but there has also been an English-speaking minority that has lived there since the 18th century, but historically never more than about 12.5% ​​of the population. In 2001 this was 735 people (just under 6%). Some of this population group are descendants of more than 400 castaways who were stranded on the archipelago.

A well-known personality of the Magdalen Islands was the Canadian Minister of Transport Jean Lapierre (1956-2016), who was born in Bassin and died in a plane crash while approaching the island. Lapierre and other family members were on their way to his father's funeral. 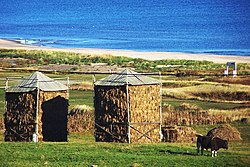 Tourism is now one of the most important industries on the islands, as well as on Prince Edward Island , as well as in New Brunswick and Nova Scotia. Tourism is taking the place of fisheries, which used to be very important, because they have lost much of their importance due to the depletion of fish stocks caused by overfishing .

The annual seal hunting season on the islands begins at the end of March . The controversial reason given is the decline in fish stocks. On the other hand, the islands try to market the natural beauties for tourism and at the same time have to deal with animal welfare campaigns.

There is a regular ferry service between the port of Souris on the Prince Edward Island and the town of Cap-aux-Meules on the Magdalen Islands, and the island group's airport is located on the neighboring Îles-du-Havre-aux-Maisons. With the exception of the Îles-d'Entrée, all of the inhabited islands in the archipelago are connected by a continuous road link.