This article deals with the Canadian province of Nova Scotia, for which the German name Nova Scotia is also common. For the eponymous district of Gdańsk, see Nowe Szkoty . 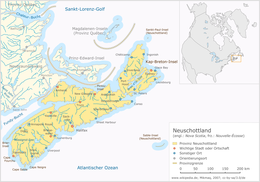 Nova Scotia [ ˌnoʊvə ˈskoʊʃə ] ( Latin for Nova Scotia , French Nouvelle-Écosse , Scottish Gaelic Alba Nuadh ) is one of the three maritime provinces of Canada . It is located on the Atlantic coast and consists mostly of the peninsula of the same name. The capital is Halifax .

The province essentially consists of a peninsula in the Atlantic Ocean and Cape Breton Island northeast of the mainland. Numerous bays and fishing villages line the coast.

The maritime character of the province is also expressed by the fact that its four most extreme points are all on islands: in the south, Cape Sable on the coastal island of the same name, in the west, the Brier island , which is also near the coast , and in the northernmost point of the island, the Cabot Strait located Île Saint-Paul and in the east about 175 km Property located off the coast of Sable island .

Nova Scotia's climate is strongly influenced by its location on the Atlantic Ocean and the Gulf Stream . The winters are mild, with average temperatures of 0 ° C to −10 ° C, which often results in Nova Scotia winters with very changeable and usually not too high snow depths. An exception is the northern part around Cape Breton Island, where the average temperature is a few degrees lower, with up to 200 mm of precipitation in the winter months.

In spring and autumn the temperatures are around 15 to 18 ° C. In autumn, the Indian Summer transforms the landscape into a unique intoxication of colors. This season usually begins in the second or third week of September and lasts until around the end of October.

The oldest human remains were found at Debert , Colchester County. The roughly 4500 artefacts, tools of the Paleo-Indians , were dated around 8600 BC. Dated. This makes Debert not only the oldest site in Nova Scotia, but also the northeasternmost of the Paleo-Indians. These people apparently hunted caribou above Cobequid Bay .

Before the arrival of the Europeans, the Mi'kmaq were hunters and fishermen. They did not grow any crops except tobacco. During the autumn they split up into small groups to hunt moose and caribou.

Permanent European settlement began when John Cabot discovered large stocks of cod off the coast in the 15th century. In 1605 Port Royal , today's Annapolis Royal , was founded. More and more French immigrated to the newly founded province of Acadia .

In 1620 James I, King of England , in the Council for New England declared the entire coast of Acadia to the Chesapeake Bay to be New England. On September 29, 1621, Sir William Alexander received land guarantees for the first British settlement in Nova Scotia. The first settlers left Scotland in 1622. Although rule over Nova Scotia repeatedly passed into English hands, there was no major British settlement in Nova Scotia worth mentioning until the founding of Halifax in 1749.

The British established their new headquarters in Halifax on the Chebucto Peninsula in July 1749 after they had to return the fortress Louisbourg to the French under the Peace Treaty of Aachen (1748) .

In 1713 Great Britain was granted the territory of Nova Scotia in the Peace of Utrecht . France kept its possessions only on Île St Jean ( Prince Edward Island ) and Île Royale ( Cape Breton Island ), where it founded the fortress Louisbourg to control the French fishing areas there and lake access to Québec . However, the British government was concerned that the majority of Nova Scotia's settlers were Catholic and French- speaking Acadians who swore no allegiance to the British crown. This conflict escalated in 1755 when over 12,000 Acadians were forcibly evicted from Nova Scotia. The British government had previously recruited Foreign Protestants , immigrants from southern Germany, to counterbalance the Catholic Acadians.

More than half of the ancestors of today's Nova Scotia people came in the period after the Acadians were driven out. Between 1759 and 1768, around 8,000 farmers from the New England states followed the call of Charles Lawrence , then governor of Nova Scotia, and settled mostly in the Annapolis Valley . After the American Revolutionary War ended , another 16,000 loyalists came to Nova Scotia. Large numbers of Gaelic-speaking Highland Scots immigrated to Cape Breton, which became part of Nova Scotia in 1763. About 1000 Northern Irish from Ulster settled in central Nova Scotia.

Nova Scotia was the first colony of the British Empire to receive some self-government in 1848 due to the efforts of Joseph Howe . On July 1, 1867, Charles Tupper led Nova Scotia together with New Brunswick and the Province of Canada into the Canadian Confederation .

The Nova Scotia political system is based on the Westminster system with a unicameral parliament. The House of Representatives consists of 51 members who are elected by majority voting in as many constituencies . The lieutenant governor , who represents the head of state, can, in consultation with the prime minister, dissolve parliament ahead of time and call new elections, in accordance with British parliamentary tradition. The Prime Minister is always the leader of the party which has won the most seats. This office is currently held by Stephen McNeil and Lieutenant Governor John James Grant .

In the Canadian House of Commons , Nova Scotia is represented by eleven MPs. According to the Canadian Constitution , the province has ten Senate seats .

More than 80% of Nova Scotia's residents have ancestors from the British Isles. The rest is made up of 18 percent of French origin and the next largest population groups with German and Dutch ancestors.

Many of Nova Scotia's residents are of Polish, Italian, Jewish and Lebanese origins. After the war of 1812 , several thousand blacks settled in the Halifax area; today 15,000 of their descendants live in Nova Scotia. More recently, Africans, Eastern Europeans, Chinese and various other Asians have also come to Nova Scotia as immigrants.

Almost 22,000 provincial residents (around 2.4%) are descended from the indigenous peoples; most of them belong to the Mi'kmaq Indians. 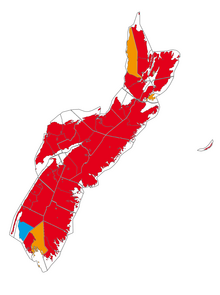 The province of Nova Scotia is officially Anglophone , with approximately 830,000 English-speaking residents and 40,000 Francophone Acadians speaking Acadian French . The Acadians live mainly in Digby County, Yarmouth County, around Antigonish, in Guysborough County, on Isle Madame and in neighboring villages in Richmond County, Cheticamp, St. Joseph du Moine and Inverness County. In addition, about 4,500 Algonquian-speaking Mi'kmaq live in the province. Among the minority languages, Arabic and German are on par with around 4,000 native speakers each, which corresponds to 0.5% of the population.

In the north of the province - on Cape Breton Island - the Canadian Gaelic language (a variant of the Scottish Gaelic language ) held a strong position among Scottish immigrants until the middle of the 20th century .

The province is home to a number of smaller universities and colleges. The larger ones include Dalhousie University and Saint Mary's University in Halifax, Acadia University in Wolfville , Saint Francis Xavier University in Antigonish and the only Francophone Université Sainte-Anne .

The gross domestic product (GDP) in 2005 was 17.89 billion euros after adjustment, which corresponds to only 2.2% of the total Canadian GDP. Nova Scotia's GDP per capita of 19,074 euros is also below that of Canada.

Nova Scotia has extensive logging, arable and fruit growing, especially in the Annapolis Valley , and mining , for example in Cape Breton. In the coastal regions of Nova Scotia, besides fishing, tourism is the main livelihood for many residents.

The extraction of raw materials such as gas, oil, gold, gypsum and other earth minerals as well as the general energy sector are becoming increasingly important. There are several mining areas in Nova Scotia that employ several thousand people.

The aerospace sector is also of increasing importance in the province. This area employs around 6,000 people in the private sector and generates annual revenues of 500 million Canadian dollars (CAD). In addition, there are a further 9,000 employees who work in the research and development holdings of the Department of National Defense (DND). The larger companies in the aerospace sector include a. Lockheed Martin Canada , CAE , Pratt & Whitney Canada and MacDonald Dettwiler .

Nova Scotia is one of the largest production locations for the film industry in Canada. The division employs around 3000 people and generates around 100 million CAD annually. There are several film studios in Nova Scotia that have the necessary infrastructure. In addition to Canadian productions, American productions are also shot in the province.

The main highway connection is the Trans-Canada Highway , which connects the province with mainland Canada. The province has several highways and small access highways to the highway.

The Halifax Stanfield International Airport is the largest airport in the province. It is often used as a refueling stop for range-critical transatlantic flights in unfavorable winds over the Atlantic. In 2012, an average of 170 aircraft movements per day were counted 3,605,701 passengers.

Provinces and Territories of Canada