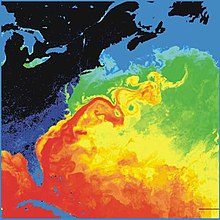 The name Gulf Stream was coined by Benjamin Franklin and refers to the Gulf of Mexico . It used to be called the “Florida Current”, on the maps of the 16th and 17th centuries the street of Florida is called Canal de Bahama .

Representation of the Gulf Stream, which continues west of the British Isles as the North Atlantic Current

The actual Gulf Stream is the ocean current between Cape Hatteras , North Carolina , up to approx. 2500 km east of it in the Atlantic. Its origins are the Florida and Antilles currents.

The Florida Current is the continuation of the Caribbean Current and thus the South Equatorial Current , the main supplier of water to the Gulf Stream. The Caribbean current flows through the narrow passage of the strait between Cuba and Yucatán into the Gulf of Mexico . This current, now called the Loop Current , then runs through the Gulf in a clockwise direction and is then pressed back into the Atlantic through an even narrower passage between Cuba and Florida .

North of the Bahamas , the Florida Current and the Antilles Current combine to form the actual Gulf Stream. In the Gulf of Mexico, the water masses have absorbed a lot of heat and initially move as a 100 to 200 km wide band along the coast of North America. In the vicinity of Cape Hatteras, the Gulf Stream breaks away from the coast as a jet stream and flows east into the North American Basin and into the open Atlantic Ocean (due to the geographic conditions below the water surface).

The Gulf Stream is part of the large current Atlantic ring consisting of the Portugal current , the Canary Current , the North Equatorial Current , the Antilles current, the current and the northeast Florida Atlantic current.

The river becomes unstable due to the east turn, it meanders and rings detach from the Gulf Stream. On its way through the Atlantic, parts split off and flow back south or west. The transported water mass is reduced by this flow separation and loses by evaporation also thermal energy .

In the formation of the Gulf Stream, in addition to the atmospheric circulation, the increasing northward effect of the Coriolis force on water movement plays a very important role.

The North Atlantic trade winds drive the surface water to the west. The coast of North America acts like a dam wall and allows the water to flow north along the coast. Due to the meeting with the Labrador Current and the Coriolis force, the water masses flowing north are diverted towards Europe.

The temperature of the Gulf Stream and its current have a major impact on the ecology of the wildlife of the Atlantic. The plankton , which drifts with the current, is the basis of food for numerous animals. These in turn attract predators within the food chain. The submarine soil structures, which are touched and partially formed by the Gulf Stream, form the habitat of this fauna .

In 1969 the submersible Ben Franklin (PX-15) undertook a four-week drift trip in the Gulf Stream under Jacques Piccard as project manager, during which the six-person crew was on their own. The boat submerged off Florida and covered 2,400 km off Nova Scotia .

In 2005, an article by the British oceanographer Harry Bryden caused a stir, postulating a strong weakening of the Atlantic part of the global conveyor belt. Measurements of the currents in the area of ​​the Labrador Sea and east of the Caribbean under the leadership of IFM-Geomar in Kiel could not support Bryden's conclusions. Although the Kiel researchers also found considerable fluctuations, no long-term trends could be derived from these.

There were regular reports in the media that the Gulf Stream was weakening and that, in the worst case scenario, Europe would experience a new Ice Age, as was the subject of the 2004 film The Day After Tomorrow . This confuses the Gulf Stream and the North Atlantic part of the global conveyor belt.

The hypothesis that the Gulf Stream is an important source of heat for Europe was put forward in an oceanographic book by the naval officer and hydrograph Matthew Fontaine Maury in 1855 . Since then it has remained like a myth under the metaphor “Europe's central heating”. As the climate researcher Richard Seager from the Lamont-Doherty Earth Observatory showed in a detailed study in 2002, the actual influence of the Gulf Stream on the European climate is rather minimal when compared with the influence of air currents and local oceanic heat capacity.

Due to global warming, the ice sheets of Greenland, Antarctica and many glaciers on earth are shrinking. This leads to a decrease in the salt content in sea water and thus lowers its density. However, a relatively high salt content in the North Atlantic is a prerequisite for maintaining the deep current there, which is part of the global conveyor belt . One consequence of the decreasing salinity is the slowdown of the Atlantic portion of the global conveyor belt. According to a publication by Stefan Rahmstorf and colleagues , the flow rate decreased by 15% between the middle of the 20th century and 2018 , equivalent to a decrease of 3 million cubic meters per second - this amount corresponds to 15 times the volume of the runoff of the Amazon . Evidence of this slowdown arose both from the general drop in temperatures over a large area in the North Atlantic and from a temperature increase in the Gulf Stream on the east coast of the USA. That was also predicted with climate models of global warming. The weakening of the conveyor belt in the Atlantic was also confirmed by drill core surveys in the Labrador Sea, which were published in the same issue of Nature 2018. The direct measurement data from the British-American Rapid project with 226 anchored measuring instruments at 26.5 degrees north also show a weakening of the conveyor belt in the Atlantic since the measurements began in 2004.

Paradoxically, the immediate effects of the weakening of the conveyor belt in the Atlantic are initially heat waves in summer and increased storms in Central Europe due to the changed air pressure conditions, which favor the increased influx of warm air from southern Europe. The overall cooling of the sea water in the North Atlantic only has an effect later.