The Gulf of Mexico ( English Gulf of Mexico , Spanish Golfo de México ; outdated: Gulf of Mexico) is a bay that is almost completely enclosed by North America . The Gulf is a marginal sea of the Atlantic Ocean and the northwestern part of the American Mediterranean . 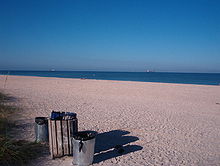 Beach on the Gulf in Sarasota County , Florida, USA

The coastline of the Gulf of Mexico is lined with numerous bays. An important arm of the Gulf is the Bay of Campeche (Spanish Bahía de Campeche ) in Mexico. Some rivers flow into the Gulf, the largest being the Mississippi River .

The land on the coast of the Gulf, including many long, narrow barrier islands , is almost continuously flat and defined by wet meadows, swamps and sandy beaches.

Major coastal cities are Tampa , Saint Petersburg , Pensacola , Mobile , New Orleans , Beaumont and Houston (all in the US), Veracruz (in Mexico) and Havana (in Cuba).

The Gulf of Mexico is connected to the Caribbean Sea via the Yucatán Strait between Mexico and Cuba and to the Atlantic Ocean via the Florida Strait between the United States and Cuba . An important ocean current in the Gulf of Mexico is the Loop Current , a loop-shaped warm ocean current that begins on the Yucatán Strait. At the Floridastraße the Loop Current merges into the Florida Current and is one of the starting points of the Gulf Stream .

The total surface of the Gulf of Mexico is about 1,550,000 km² , of which the southern third is in the tropics . The Mexican Basin in the center reaches a depth of 4375 m.

The continental shelf (shelf area) is relatively wide at most points along the coast.

The water temperature is around 30 ° C in summer and around 25 ° C in winter. This is due to the fact that the gulf is largely located in the tropical zone. The Gulf is regularly hit by powerful hurricanes , which often cost many lives and cause great destruction.

The coastal areas of the Gulf were first populated by Native American groups, including those representing various of the advanced Mexican cultures.

During the period of European exploration and colonization, the entire region became a contested area between the Spaniards, the French and the English. Today's culture in the coastal region is primarily Hispanic (Mexico, Cuba) and Anglo-American (USA).

Oil production in the Cantarell field , with the Yucatan coast in the background

The oil deposits in the shallows are exploited by drilling rigs , which are mainly located in the western Gulf. Another important commercial use is in fishing ; the catch consists mainly of various fish as well as shrimp and crabs . For several years now, fishing yields have been falling. Reasons are overfishing and coral bleaching . Oysters are harvested on a large scale in many bays and straits .

Other important industries along the coast include marine transportation, petrochemical processing and storage, papermaking, and tourism . 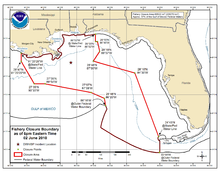 On the Gulf of Mexico, especially in the area of ​​the Mississippi Estuary and on the Florida coast, there are numerous animal sanctuaries and laying places for sea turtles.

In June 1979, the Sedco 135F drilling platform was destroyed by the overpressure of the submarine oil reservoir. The oil shot out of the now open borehole, which could not be completely sealed until March 1980.

Asphalt volcanism on the ocean floor

In 2003, during the search for methane hydrate north of the Bay of Campeche, submarine salt domes of up to 800 m height were discovered on the sea ​​floor at a depth of 3000 m . Asphalt oozes from the central chimneys of these elevations, which consist of salt that penetrates upwards from the deep layers through the forces of salt tectonics , runs down the slopes like lava and covers a large area of ​​the surrounding sea floor. Because of this similarity to volcanic activity, these hills, known as Campeche Knolls, were called asphalt volcanoes by their discoverers . Something comparable has not yet been known from any other place in the world, and it is also widely assumed that the necessary geological conditions are only given in this bay.

The ecosystem that has developed around the asphalt springs is also remarkable and so far unique . Comparable to the living world of black smokers called hydrothermal vents on the mid-ocean ridge has here a community established highly specialized organisms which are also its energy needs chemosynthetically from the released chemical compounds revealed. However, it is still unclear exactly which substances are involved, because the compounds released by the hydrothermal springs, which form the basis of life there, are not contained in asphalt.