Pensacola [ ˌpɛn.sə.ˈkoː.lə ] is a city and the county seat of Escambia County in the US state of Florida with 53,779 inhabitants (as of 2016). It is the largest settlement in the metropolitan region of the same name, Pensacola .

Pensacola is located in the far northwest of Florida near the border with Alabama and has a seaport in Pensacola Bay, which connects to the Gulf of Mexico . The naval aviation base ( Naval Air Station Pensacola ) is, among other things, the home of the naval air show team Blue Angels . The US Navy Research Laboratory is also located in Pensacola.

The highest temperatures of up to 28 ° C are measured in May to October, the coldest months are December to February with an average of only 8 ° C. Snowfall is very rare in the region.

The name goes back to an Indian tribe who lived nearby. It means long-haired people in the Choctaw language and is derived from panshi = hair and kla = people. 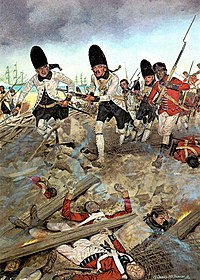 Pensacola was the first European settlement in what is now the United States and was founded in 1559 by Don Tristan de Luna and his Spanish settlers, who docked with seven ships and around 1550 soldiers. Shortly afterwards, the place was destroyed by a strong storm. Because of this, many people consider St. Augustine , Florida to be the first place in the US to be settled by Europeans.

In 1784 the first privately financed dock was completed and trade with England began. In 1821, John Quincy Adams ordered the construction of several forts and a shipyard to build warships. This led to an enormous boom in wood procurement and processing. In 1851 the first cargo of timber left the port on behalf of a third party.

In 1835 construction began on the Florida, Alabama & Georgia Railroad , which would connect the port of Pensacola with Montgomery , Alabama and enable the transportation and shipment of cotton from Alabama. However, the company went bankrupt during the economic crisis of 1837 and the project remained unfinished.

The Pensacola area is home to three historic forts: Fort Pickens , Fort Barrancas, and Fort McRee . Fort Pickens was completed in 1834. When Florida broke away from the Northern States on January 10, 1861, the Confederates came from the evacuated Fort Pickens and held it until May 1862. From 1885 to 1887 the chief of the Apaches Geronimo was imprisoned in Fort Pickens.

From 1875 to 1895, Pensacola was one of the most important timber handling centers. During this time about 1.1 billion linear meters of wood left the port. Other noteworthy export goods were cotton, phosphates, grain, tobacco, flour, resin, turpentine as well as coal and iron.

In 1882 the railway line to Jacksonville was completed, and the goods produced could also be sent overland, which brought about a further boom. At that time the city already had 13,000 inhabitants.

Due to the stock market crash in 1929 and the subsequent Great Depression , Pensacola and the port lost their economic importance, which only changed again in 1941, when the demand for coal for the allies increased during World War II . In 1942, the grocer Calvin Todd managed to put the port, which had been private until then, into public ownership, which was accomplished in 1943 when the port authority was established. In 1948, 1955 and 1958 three major fires destroyed large parts of the docks. The complete renovation of the port was decided in the same year.

In 1960 all trade with Cuba , which until then was the most important trading partner, broke off. In 1965 this crisis was also overcome, and 98% of all timber traded was exported through the ports of Florida, 63% of the peanuts exported were exported through Pensacola.

Before Tallahassee, Pensacola was the government capital of Florida for a short time.

In Pensacola there are currently 243 different churches from 25 different denominations. Among the churches belonging to a denomination, the Baptist congregation is most strongly represented with 99 churches. There are also 16 churches that do not belong to any denomination (as of 2004).

Pensacola is considered the starting point of a charismatic revival movement of the modern age and gave it its name.

Pensacola has been the seat of the Roman Catholic diocese of Pensacola-Tallahassee since 1975 . The mother church of the diocese is the Sacred Heart Cathedral (Herz-Jesu).

The following properties are listed on the National Register of Historic Places :

There is a wide range of different city parks as well as several sporting facilities, as well as playgrounds and opportunities for camping. Sports options include softball, baseball, football, basketball, soccer and swimming.

The port and the companies located there are the largest employers in Pensacola. The other branches of employment are: education, health and social affairs: (25.3%), trade / retail: (12.6%), arts, entertainment, food, restaurants: (11.3%).

The Naval Air Station Pensacola is the largest naval aviation base of the US Navy in Pensacola. 16,000 military and 7,400 civilian employees are employed there.

Until 2005, the Pensacola station was a station of the Sunset Limited of the Amtrak railway company from Orlando to Los Angeles . However, after the effects of Hurricane Katrina , the line was shortened to the New Orleans - Los Angeles route. Since then, the only rail transport has consisted of goods transports, which are operated on the west-east corridor by the CSX Transportation company and to the north by the Alabama and Gulf Coast Railway .

The city's airport is Pensacola International Airport , which offers flights to destinations within the United States.

Sister cities of Pensacola are