from Wikipedia, the free encyclopedia
This is the sighted version , flagged on April 10, 2017 . There is 1 pending change that has yet to be viewed. 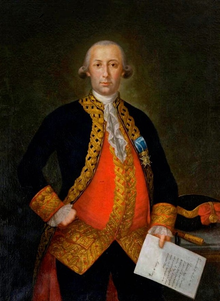 Bernardo de Gálvez y Madrid (born July 23, 1746 in Macharaviaya , Málaga , † November 30, 1786 in Tacubaya (now in Mexico City )) was a Spanish general and politician. He commanded Spanish troops in the American War of Independence and was appointed Viceroy of New Spain shortly before his death .

Deployments in Europe and America

Gálvez was trained at the Military Academy of Ávila , participated in the war against Portugal at the age of 16 and was promoted to lieutenant. He came to New Spain as a captain in 1762 and led a campaign against the Apaches there, together with the allied Opata . He became the commandant of Nueva Vizcaya and Sonora, the northern provinces of New Spain. In 1772 he returned to Spain and was stationed with the Cantabria Regiment in Pau , France , where he began to learn French. He was transferred to Seville and in 1775 took part in Alejandro O'Reilly's fateful military expedition to Algiers . Here he was seriously wounded when he stormed the fortress. In the same year he was promoted to lieutenant colonel and appointed a teacher at the Avila Military Academy.

In 1776 he became interim governor of Louisiana , which France had ceded to Spain in 1763 as compensation for Florida ceded to Great Britain . In 1777 he married the Creole widow Maria Feliciana Saint-Maxent, with whom he would have three children. In 1778 he founded Villa de Gálvez (today's Galvez ).

Gálvez was sent by Viceroy Martín de Mayorga with a contingent of colonial troops to help the rebellious British colonists in their rebellion against the motherland. The reason for this was Spain's desire to regain territories lost to the British, especially Florida, and to eliminate the British threat.

On June 21, 1779, Spain declared war on Great Britain. On June 25th a secret telegram was sent from King George III. and Lord Germain to General John Campbell at Pensacola , instructing him to capture the Spanish fort at New Orleans . This secret message fell into Gálvez's hands, who then began to prepare Louisiana for war quickly and quietly.

Gálvez led a successful campaign and defeated British colonial troops in 1779 at Fort Bute, in the Battle of Baton Rouge and Natchez . The Battle of Baton Rouge freed the lower Mississippi Valley from British forces and the threat to Louisiana's capital, New Orleans. In 1780, with the battle of Fort Charlotte , he retook Mobile . The Spaniards' next destination was Pensacola (Florida) . With the help of Francisco Saavedra de Sangronis , the Spaniards set up a reinforced expeditionary army in Cuba. At the Battle of Pensacola on May 9, 1781, he achieved his most important victory when he captured the British (previously Spanish) capital of West Florida from General John Campbell in an attack from land and sea. The loss of Mobile and Pensacola deprived the British of all naval bases in the Gulf of Mexico , except New Providence, in the Bahamas .

For his great successes, he was appointed lieutenant general and later promoted to field marshal, governor and captain general of Louisiana and Florida, the commander of the expeditionary force in North America and was Vizconde of Galvezton and Count of Gálvez raised. The American War of Independence ended when Gálvez was preparing a campaign to conquer Jamaica .

From the perspective of the Americans , its importance lies in the fact that it thwarted their encirclement by the British and kept a supply route open. Gálvez also supplied the rebels with material and soldiers. Gálvez was involved in drafting the provisions of the Peace of Paris , which ended the war. Through this treaty, Spain officially regained west and east Florida.

Gálvez returned to Spain in 1783 and took part in the campaign in the Netherlands . The following year he was posted to Cuba as governor and captain general . Shortly after his arrival in Havana , his father Matías de Gálvez y Gallardo , the viceroy of New Spain, died, and Gálvez was appointed his successor. He reached Veracruz on May 26, 1785 and Mexico City in June. A plague-followed famine broke out during his reign. Gálvez made efforts to increase future agricultural production.

He had Chapultepec Castle built, began installing street lamps and building the cathedral's towers. Furthermore, he pushed ahead with the construction of the connection road to Acapulco , began to curb the abuse of the Indian workers through various measures and determined that 16% percent of the income from lottery and gambling went to welfare. He also financed the expedition of Martín Sessé y Lacasta and Vicente Cervantes . These created an inventory of the various plant, bird and fish species in New Spain. Due to an illness, he handed over his government duties, apart from those of captain general, to the Real Audiencia on November 8, 1786 . He died on November 30, 1786 in Tacubaya (now part of Mexico City) and was buried in Mexico City in the Church of San Fernando.

Gálvez was a bearer of the Order of Charles III . In addition, on July 28, 2014, he was the eighth person to be awarded honorary American citizenship .