Jacksonville is a city and also the county seat of Duval County in the US state of Florida with around 880,000 inhabitants (as of 2016). In 1968 the city was merged with the county government of Duval County ( consolidated city-county ). Jacksonville is the most populous city in Florida and at 2264.5 km² the largest city in the continental USA . The city is part of the Jacksonville metropolitan area with a population of over 1.5 million. It is located at the confluence of the St. Johns River with the Intracoastal Waterway and the Atlantic Ocean in northeast Florida.

Jacksonville is predominantly industrial. This is particularly thanks to the industrial port, which is one of the most important shipping ports for automobiles in the USA. The port also serves as the base of the US Navy, which has proven to be a disadvantage for the automotive industry. Military shipping has priority in the port, which is the main reason why Daimler , for example, has been negotiating the import of its vehicles for the south-east region in nearby Brunswick (Georgia) since 2009 .

Jacksonville is named after the former US President Andrew Jackson . Since 1857 the city has been the seat of the Roman Catholic diocese of Saint Augustine .

Jacksonville is located in the far northeast of Florida and covers most of the area of ​​Duval County. The city limits are identical to the boundaries of the county in the north, west and south, in the east the Atlantic Ocean forms the natural city limits, with the exception of the southern area, where the cities of Atlantic Beach , Jacksonville Beach and Neptune Beach line up . Jacksonville borders St. Johns County to the south . Baldwin in the west of the county is an enclave and is completely enclosed by Jacksonville.

Jacksonville is geographically divided by the St. Johns River , which meanders from the south to the center of Jacksonville and then further east to its confluence with the Atlantic Ocean. It largely determines the administrative structure of the city. Old City is in the center, mostly west of the river, while to the east of it is Arlington . The borough of Southside is south of the river and includes all areas outside of Arlington, unless they fall within the borough of Beaches . West of the river is the Westside . The rest of the city is part of the Northside and includes all areas north of the river or northwest of the Old City.

The area of ​​Jacksonville was settled 6000 years ago by the Timucua , whose largest settlement was in the area Ossachite , which was in what is now the city of Jacksonville.

After the beginning of the European settlement of the American continent, the area first belonged to the Kingdom of France (1562–1565), then to the Spanish colonial empire (1565–1763). The area was later part of the Kingdom of Great Britain (1763–1783). As the first permanent settlement in modern times north of Mexico as "Cow Ford" was founded in 1791, the area was again Spanish (1783-1821). After Florida became US territory in 1821, the city took its current name after the then governor and later President Andrew Jackson .

Jacksonville was a Civil War site and a Confederate City from 1861 to 1862 ; although no battle took place here, it was damaged. After that, the area became a popular winter retreat for the rich and famous. The city was hit by yellow fever epidemics in 1886 and 1888 .

On May 3, 1901, Jacksonville was badly damaged by a fire that broke out in a mattress factory. At lunchtime, a glowing spark ignited the filler material. Believing that the source of the fire could be extinguished quickly with a few buckets of water, no fire alarm was initially triggered. The flames spread faster than expected and spread. Over the next eight hours, 2,368 houses were destroyed and 10,000 people were left homeless. The disaster is one of the worst in Florida's history.

During the Second World War, a US Navy training station was set up in Jacksonville , which was later relocated to Pensacola . Further in Jacksonville there is still a large base of the Navy (Naval Air Station Jacksonville).

In 1967 all dependent localities in Duval County were incorporated. In 1968 the Jacksonville county government was also merged into a Consolidated city-county .

Jacksonville has also been the site of racial segregation and violence. On August 27, 1960, members of the Ku Klux Klan took action against protesting blacks. The situation has eased significantly recently. In 1995, Nat Glover was elected Duval County's first African American sheriff.

In Jacksonville there are currently 558 churches from 32 different denominations, of which the Baptist congregation is most strongly represented with 214 churches. There are also 44 churches that do not belong to any denomination (as of 2004). 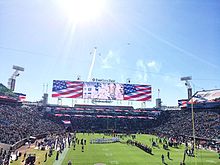 There are some excellent golf courses around Jacksonville, including B. the Tournament Players Club in Sawgrass, the annual venue for the PLAYERS Championships. Held every May as part of the PGA Tour , this tournament is the highest-value event on the tour with a $ 8 million prize money.

High-class tennis is also played in the city every year when the WTA tour stops here for the Bausch & Lomb Championships.

Furthermore, some semi-professional teams are represented in Jacksonville: The now defunct Jacksonville Barracudas from the SPHL in ice hockey , the Suns as a minor league team of the Los Angeles Dodgers in baseball and the Jacksonville Northsiders FC in football .

See also : List of universities and colleges in Jacksonville (Florida)

The following streets run through Jacksonville:

The Jacksonville station is the main station of the city with daily trains to Miami and New York City . A monorail system called a skyway operates in downtown Jacksonville .

The Jacksonville Port Authority (JAXPORT) is the port authority to which the seaport facilities on the St. Johns River are subordinate. The United States Marine Corps has a base on Blount Island .

On November 23, 2012, Michael David Dunn shot and killed the unarmed 17-year-old student Jordan Davis, to whom he had previously complained about loud music; Dunn was sentenced to life imprisonment for the crime. 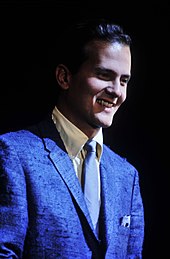