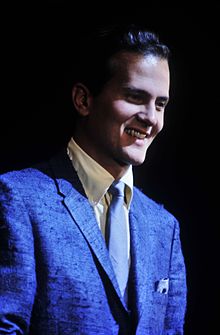 Charles Eugene "Pat" Boone (born June 1, 1934 in Jacksonville , Florida ) is an American singer and actor. His gentle voice made him one of the most popular pop and ballad singers of the 1950s and 1960s.

Pat Boone is the descendant of the American pioneer Daniel Boone , whose adventure JF Cooper incorporated into his novel Leather Stocking . Born in Jacksonville, Florida, the family moved to Nashville , Tennessee in 1935 , where Boone performed at the Belle Mead Happiness Club at the age of ten. From 1951 he had his first successes as a singer in various amateur competitions. This was followed by an engagement at a well-known radio station and his discovery in 1954 by Albert Godfrey, who saw Boone in the final event of the Ted Mack TV Amateur Hour in New York. 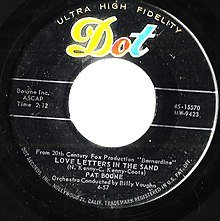 Boone's love belonged initially to rhythm and blues , his first recordings were cover versions of tracks by African-American musicians. These recordings by Boone and, for example, by Elvis Presley, were not infrequently more successful than the original versions in the mid-1950s.

In February 1955, Two Hearts, Two Kisses, the first record to be recorded in Chicago , was immediately placed in the top ten charts. Pat Boone's recording career began with the cover version of Fats Dominos Ain't That a Shame , his first million dollar seller. He released five records in the first year and sold more than four million copies.

Boone's style of singing to the baritone of Bing Crosby recalls, soon made him a star. Ballads became his specialty, including his biggest hit Love Letters in the Sand and hits like April Love , Friendly Persuasion (Thee I Love) , I'll be Home and Don't Forbid Me . For many of his hits he was accompanied by the Billy Vaughn Orchestra, which was later also known .

In the 1950s he was only surpassed as a teenage idol by Elvis Presley, whose musical antithesis he was, and like Presley he started a second career as a film actor. He played and sang the theme song in the film April Love , which was nominated for an Oscar . As a devout Christian, he refused to play roles that did not meet his moral standards. Among other things, he played a leading role in the hit movie The Journey to the Center of the Earth in 1959 .

With the advent of beat music in the 1960s, its success waned. He turned to gospel and country and supported various young musicians, including Larry Norman and Randy Stonehill . In 1997 Boone released a collection of heavy metal songs in its signature arrangement under the title No More Mr. Nice Guy . Today he works as a radio DJ and runs his own record company.

Pat Boone was married to Shirley Lee Foley (1934-2019), a daughter of country singer Red Foley , from 1953 until her death . Pat moved with his wife to Denton , Texas , where the first of four daughters were born in 1954. The second daughter was born in 1955, after which they moved again to Leonia , New Jersey . There Boone studied at Columbia University, despite his numerous artistic commitments and the eleventh gold record. His family expanded to include Debby Boone , born 1956, and another daughter, born 1958. The family moved to their own house in Teaneck , New Jersey, and Boone graduated with a BA with Magna cum laude . His granddaughter is the actress Tessa Ferrer . In the 1960s and 1970s, he performed with his family as The Pat Boone Family .

In the United States, Boone is one of the best-known conservative voices in show business, among other things, he appears more often on Fox News . He works for various organizations and has supported a number of Republican candidates. In the 1960s he supported the civil rights movement and in 1960 turned down a concert tour to South Africa because of apartheid . In 2011 he received a Lifetime Achievement Prize from the Conservative Political Action Conference .

Boone grew up in the Churches of Christ and has remained connected to the Christian faith to this day, including organizing public Bible readings at which other celebrities also appeared. In the 1960s, together with other well-known personalities, he advocated the reintroduction of compulsory school prayers, and the lack of such prayers made Boone jointly responsible for several rampages in schools in February 2018.