The title of this article is ambiguous. Additional meanings are listed under Nashville (disambiguation) .

Nashville [ ˈnæʃvɪɫ ] is the capital of the US state Tennessee and the county seat of Davidson County . It is the largest city in Tennessee by area and is located on the Cumberland River . Nashville is the center of commercial country music and is therefore called "Music City". The residents call themselves Nashvillians .

Nashville has a humid, subtropical climate with cold winters and hot summers. During the winter months, around 22.9 cm of snow falls on average, most of it in January and February. There are often violent thunderstorms in autumn and spring, and tornadoes can sometimes occur.

The first people to live in what is now Nashville were Paleo-Indians at the end of the last glacial period , about 13,000 BC. The first European settlers in the area were French fur traders who established the French Lick trading post there. The area was an important hunting ground for many Indian tribes. The Shawnee claimed the area for themselves in the 17th century , but were driven north by the Cherokee and Chickasaw .

In October 1779 a trek headed west from the Watauga settlement, led by James Robertson, began . On Christmas 1779, the settlers crossed the frozen Cumberland River and founded Fort Nashborough . A short time later, the fort became Nashville. Because of its good location on a river and the heavy rail traffic, Nashville grew rapidly. As early as 1806, the settlement was granted city rights and it was made the administrative seat of Davidson County. In 1819 a paddle steamer succeeded for the first time in driving the Cumberland River upstream to Nashville. In 1843 the city was declared the capital of Tennessee. 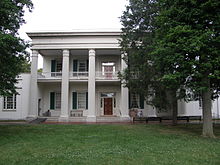 In addition to The Hermitage, the National Park Service has five other National Historic Landmarks for Nashville (as of December 2016), including the Tennessee State Capitol , the Ryman Auditorium and the George Peabody College for Teachers . 157 buildings and sites in the city are listed on the National Register of Historic Places (NRHP) (as of November 12, 2018).

Nashville is the center of country music , which is why the city is called "Music City". Numerous music publishers and record companies reside here with their studios. Is famous for example, the Studio B of RCA , were added to the numerous hits. The Country Music Association CMA is headquartered in Nashville. The annual CMA Awards ceremony is one of the most important events in Tennessee. The Country Music Hall of Fame is also located in Nashville. Nashville is also home to the Gibson Guitar Corporation guitar company .

Downtown Nashville is home to numerous well-known music clubs and honky tonk bars , which almost always have live music. The focus is on Lower Broadway, Second Avenue and Printer's Alley. Thousands of country fans travel to Nashville every year for the CMA Music Festival, the former Fan Fair.

The live show Grand Ole Opry has also been broadcast from Nashville since 1925 , the oldest surviving American radio music program that is now also broadcast on television. The concerts were broadcast from the Ryman Auditorium until 1974, and since then from the Opryland entertainment complex located just outside the city center on the Cumberland River . The radio show Ernest Tubb Midnight Jamboree is also based in Nashville.

Replica of the Parthenon in Nashville

Nashville has had a full-scale replica of the Parthenon since 1897 . The originally provisional building was replaced by a solid reinforced concrete structure in the 1920s and now serves as an art gallery. Since 1990 it has housed a statue of Athena , which is considered to be the largest sculpture in the western world to be found within a building.

The first skyscraper , the Life & Casualty Tower , was built in 1957. In 1994 the currently tallest building, the 192 m high AT&T Building, was completed . In February 2010, the 127 m high Pinnacle at Symphony Place was completed. There is a 1: 4 scale replica of Fort Nashborough in Riverfront Park.

The Nissan Stadium is the home ground of the Tennessee Titans

Nashville has two well-known teams in the American professional leagues. The Tennessee Titans reached Super Bowl XXXIV in 2000 , the final in the American football league NFL . In addition, the Nashville Predators play ice hockey in the NHL and reached the final of the 2017 Stanley Cup playoffs .

Lesser known teams include the Nashville Sounds , who play minor league baseball as the Milwaukee Brewers' farm team . There has also been an arena football team again since 2005 , the Nashville Kats . Nashville SC has been playing in Major League Soccer (MLS), the highest American soccer league, since the 2020 season .

Nashville has 121 parks and 19 green spaces with a total area of ​​approximately 49 square kilometers. HG Hill Park is located in the western part of the city . Nashville also has twelve golf courses.

The Tennessee State Capitol is the seat of government and the seat of the governor of the state of Tennessee.

As the home of country music, Nashville is home to many record labels, most of them on Music Row. Since 1960, the city has been the second largest music center in the United States after New York City . The economic performance of the music industry in 2006 was estimated at $ 6.4 billion and jobs at 19,000.

Although Nashville is known as a music hub, the healthcare industry is the largest of its kind . More than 250 healthcare companies are based here, including the Hospital Corporation of America , the largest private hospital operator . Sales in this industry in 2006 were estimated at $ 18.3 billion and the number of jobs in the region was estimated at 94,000.

The Nashville-Davidson metropolitan area generated an economic output of 124.2 billion US dollars in 2016. 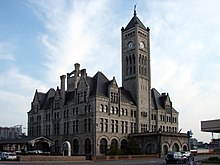 The city has a direct connection to the Kentucky city of Louisville via the railway line operated by the Louisville and Nashville Railroad and now by CSX Transportation .

Nashville is on the Interstate Highways I 40 (to Memphis - Knoxville ), I 24 (to Clarksville - Chattanooga ) and I 65 (to Louisville - Birmingham ). The Interstate 440 connects the south of the city of the three interstates each other. A total of 129 kilometers of interstate highways run through the city.

The Nashville Metropolitan Transit Authority (MTA) connects the city with Davidson County on a variety of bus routes. On September 18, 2006, a rail system, the Music City Star, was introduced. The only line so far connects the city of Lebanon with the city center. Further routes are being planned.

Nashville International Airport is approximately 12 km southeast of the city center. It is connected to Interstate 40 and is connected to the city by the MTA bus route 18. In 2007 it was used by around 10 million passengers. Most of the flights are operated by Southwest Airlines , but Delta Air Lines and US Airways are also represented here. International destinations are Toronto (Canada) and Cancun (Mexico) and, since 2018, London (Great Britain).

The oldest and largest daily newspaper is The Tennessean . It was founded in 1907 and has a daily circulation of 95,311 copies and a Sunday edition with a circulation of 212,839. WBOZ is a radio station.

The Vanderbilt University , founded in 1873 by a donation of Cornelius Vanderbilt , is the largest with about 11,000 students Nashville's University ; it is one of the top universities in the USA. Other colleges and colleges include the American Baptist College , Aquinas College, Belmont University , Fisk University , Nashville State Community College, Tennessee State University, and Watkins College of Art and Design. Because of the many higher educational institutions Nashville is also known as "Athens of the South" ( " Athens called the South").

→ Main article : List of personalities from the city of Nashville