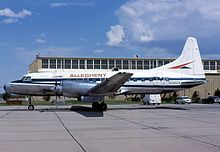 US Airways was an American airline based in Tempe (Arizona) that was one of the largest in the world with more than 66 million passengers annually (as of 2013) .

US Airways emerged from a regional airline that mainly served the Northeast of the USA , and began operating as USAir in 1987 after acquiring other airlines with international air traffic. In 2005, US Airways was bought by America West , keeping the name US Airways. Until 2013, the airline was one of the four remaining large scheduled airlines with an extensive route network, the legacy carriers, alongside American Airlines , Delta Air Lines and United Airlines . On December 9, 2013 , US Airways merged with American Airlines to form the largest airline in the world. Until October 16, 2015 there were still flights under the name US Airways , but these were already operated by American Airlines, whose name the merged airline continues. US Airways was 2004-2014 member of the airline alliance Star Alliance and was subsequently until its dissolution to Oneworld .

On March 5, 1937, the airline All American Aviation was founded in Pittsburgh , which operated mail flights from 1939 . Along with the first passenger flight on March 7, 1949 with a Douglas DC-3 , the airline was renamed All American Airways .

A Douglas DC-9 in the Allegheny Airlines livery.

On January 1, 1953, the company name was changed to Allegheny Airlines in allusion to the Allegheny Mountains . The airline's first type of turboprop aircraft was the Convair 540 , which was only active in 1962. The first type of jet aircraft in operation at Allegheny was the Douglas DC-9-14 , which was delivered on May 29, 1966.

On October 28, 1979, Allegheny Airlines was renamed USAir to give the company name a less regional sound. USAir expanded particularly in 1987 when Pacific Southwest Airlines from San Diego and Piedmont Airlines from Winston-Salem were acquired. With the purchase of Piedmont Airlines from its parent company Piedmont Aviation and the associated flight rights to London-Gatwick , USAir began international air traffic and took over several Boeing 767-200ERs that had previously been in use for Piedmont on this route. USAir was one of the largest airlines in the world for the first time and operated over 5,000 flights a day. In 1990, the company added scheduled flight connections to Frankfurt and in 1992 to Paris to its route network.

The name Piedmont was temporarily given up in 1989 after the full integration of their fleet into USAir , but revived by USAir in 1993 as the feeder airline Henson Airlines, acquired in 1987 (founded in 1961 as Henson Aviation , acquired by Piedmont Aviation in 1983 ) as the new Piedmont Airlines feeder flights for USAir offered. From 1990 onwards, all regional airlines acquired by the group of companies used the uniform USAir Express brand identity . The subsidiary Piedmont Airlines has been owned by American Airlines since 2013 . 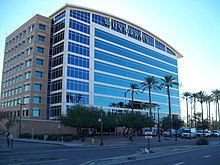 US Airways headquarters in Tempe

USAir was renamed US Airways in 1996 and introduced a new corporate design . In November 1996 the company signed a contract with the aircraft manufacturer Airbus for the delivery of 150 aircraft from the Airbus A320 family and 250 options, the largest single order in the history of civil aviation. In 1997 the company presented a new business class for its international long-haul flights called the Envoy Class and its airport lounges under the name Envoy Lounge . A First there was at US Airways exclusively for the domestic US market, and there - as with most US carriers - instead of business class. On May 4, 2004, US Airways joined the Star Alliance airline group .

After US Airways had been in financial difficulties since the late 1990s and was under Chapter 11 bankruptcy protection since September 2004 , it was taken over by America West Airlines on September 27, 2005 . The merged airline kept the name US Airways for marketing reasons . The headquarters was of Arlington ( Virginia ) to Tempe (Arizona) relocated the headquarters of America West. Internally, the US Airways acquired ran as US Airways East , while the former America West Airlines was internally referred to as US Airways West . In September 2008, the merger was completed using a common ICAO code (AWE) and callsign (Cactus).

At the end of 2006, US Airways announced that it was aiming to take over the financially troubled competitor Delta Air Lines , which, however, resisted the takeover plans. US Airways' last takeover bid was $ 10 billion, but had to be withdrawn on February 1, 2007 because not all lenders supported the takeover offer.

From December 2009 a new business class called Envoy Suite was built into the A330 fleet . At the beginning of 2012 there was a slot swap with Delta Air Lines . Here was US Airways slots at LaGuardia Airport from these slots and received for it in Washington-Reagan .

Merger with American Airlines and liquidation

US Airways ended its membership in the airline alliance Star Alliance on 30 March 2014. For a transitional period until its dissolution the end of 2015 was US Airways , such as American Airlines earlier, the aerospace composite Oneworld associated.

US Airways had hubs in Philadelphia , Charlotte and Phoenix, as well as smaller hubs in Las Vegas , Washington-Reagan and Pittsburgh . The route network mainly comprised the south and east of the USA as well as Europe and the Caribbean.

US Airways served three destinations in Germany and Switzerland on four routes:

US Airways had the largest Airbus fleet in the world. Many aircraft were equipped with Internet access from Gogo Inflight Internet in order to be able to use the Internet during the flight.

Numerous Airbus A319 aircraft were painted in the colors of the airlines they had taken over: Pacific Southwest Airlines , Piedmont Airlines , America West and Allegheny Airlines, with the lettering being replaced by "US Airways".

US Airways and its predecessor airlines operated aircraft of the types: 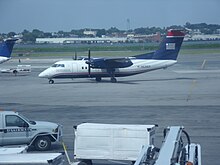 Donald Trump founded the Trump Shuttle airline in 1989 with a former Eastern Airlines aircraft and had to sell it to a banking consortium in 1992. The consortium renamed the airline Shuttle, Inc. and agreed a feeder agreement under the name USAir Shuttle through a 40% stake through the then USAir Group . In 1997 USAir took over the regional airline from the banks as a subsidiary, which from then on offered flights as US Airways Shuttle . As with Trump Shuttle, the airports in New York LaGuardia, Boston Logan and Washington Reagan National on the east coast of the USA were served. In 2000, the US Airways Group integrated the subsidiary into the US Airways fleet and finally gave up the name of the shuttle, although the successor company of US Airways, American Airlines, still offers short flights between the three airports to this day. 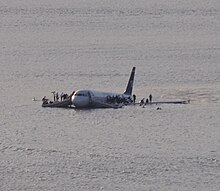 US Airways Flight 1549 ditched in the Hudson River, New York

US Airways (and under its various previous names) has suffered 28 total aircraft losses. In 14 of them 415 people were killed. Examples:

From the Silver Preferred level , in addition to the advantages of Oneworld - Sapphire status, you had access to the US Airways Club airport lounges , 20 of which exist in the USA and one at Gatwick Airport near London , as well as access to most of the world's Oneworld lounges . Customers with Chairman status were automatically upgraded on North America routes as long as seats were available.

Commons : US Airways  album with pictures, videos and audio files