The Douglas DC-9 or McDonnell Douglas DC-9 is a twin - engine narrow -body aircraft produced by the US aircraft manufacturer Douglas Aircraft Company (from 1967: McDonnell Douglas ) for short and medium-haul flights . It is a twin - engine low -wing aircraft with jet engines attached to the side of the stern, a pressurized cabin, a retractable landing gear and a T- tail unit . The DC-9 was completely redeveloped by Douglas after the experience with the four- engine long-range machine DC-8 in order to complement it.

→ Main article : Development history from the Douglas DC-9 to the Boeing 717

The first drafts for the future DC-9 were created in 1961 as Douglas Model 2086, which already came very close to the final design and provided a wing sweep of 24 °. The fuselage cross-section corresponded to the conception of the double-circle cross-section of the Douglas DC-8 , but was smaller than this, which in the long term would prove to be a competitive disadvantage compared to the Boeing models 727 , 737 and 757 , which took over the fuselage of the 707 directly. The use of turbofan engines was planned from the start. Initially the Pratt & Whitney JTF10A-2 and the Rolls-Royce Spey were discussed . Depending on the seating, there should be space for 56 to 77 passengers. Design details were launched and published in the trade press as early as April 1962, assuming a market of 400 to 1,000 aircraft in this segment for the next ten years.

The decision to develop the aircraft, now known as the DC-9, was announced on April 9, 1963, and detailed engineering work began in July 1963. The original design was lengthened by about three meters to accommodate up to 83 Passengers seat. The first orders for the new model were Bonanza Airlines and Delta Air Lines in the summer of 1963 . 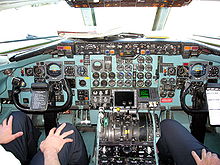 The first of a total of five prototypes took off on its maiden flight on February 25, 1965 . The take-off weight was limited to 37,400 kg so that the aircraft could be operated with a cockpit crew of only two pilots in accordance with the regulations at the time. The engines used were Pratt & Whitney JT8D 5 turbofans with a thrust of 55.6 kN . The approval by the Federal Aviation Administration took place on November 23, 1965. On December 8, 1965, the Delta Air Lines began regular service with the DC-9-10.

The successor models of the McDonnell Douglas MD-80 series , the MD-90 and finally the Boeing 717 were derived from the DC-9 . However, the official type designations in the respective type approval remained, i.e. DC-9-81, -82, -83 and -87. Only the MD-88 and the later MD-90 were officially approved under these designations.

The later type designation MD comes from the fact that Douglas merged with McDonnell in 1967 to become McDonnell Douglas . McDonnell Douglas in turn was taken over by Boeing in 1997 , which modernized the last version of the DC-9 again and sold it as the Boeing 717 .

The Series 10 , often referred to simply as the DC-9-10, was the first model series of the DC-9. It offered space for 90 passengers and made its maiden flight on February 25, 1965, after which the first aircraft was handed over to its first customer Delta Air Lines on September 18, 1965 . It can transport 90 passengers over 2340 km.

The Series 20 or DC-9-20 is nominally the second member of the DC-9 series, but it was developed and offered as the fourth, after the Series 10, 30 and 40. The Series 20 was developed as a high-performance version of the Series 10 developed; This meant a larger wingspan and more powerful engines (Pratt & Whitney JT8D-9 or JT8D-11), in order to be able to take off from short runways and high-altitude airports, and the range increased to 3,430 km, over which 90 passengers now flown can be.

The Series 30 or DC-9-30, which was about 4.50 meters longer than the basic model, was the second version of the DC-9. With a total of 621 copies produced, it was the most successful type of the original DC-9 family. The first delivery took place in January 1967 to Eastern Air Lines . Due to the extended fuselage, the DC-9-30 offered space for up to 115 passengers. The wings of the Series 30 were also lengthened and equipped with a new type of slat flap system to enable take-offs and landings on short runways . The range is 3030 km.

DC-9-40 of the SAS Scandinavian Airlines

In order to meet the demand for higher passenger capacity, McDonnell Douglas offered the Series 40 or DC-9-40 as the third variant of the DC-9 , which in turn had an extended fuselage with space for a maximum of 125 passengers and an increased range of 3,120 km. The wing was identical to that of the Series 30 . The first delivery took place at the end of February 1968 to SAS . Although the 40 series consisted of only one sub-variant - the DC-9-41 - different engine variants (Pratt & Whitney JT8D-9, JT8D-11 or JT8D-15) were available.

Only two customers - the aforementioned SAS and the Japanese TDA Toa Domestic Airlines - ordered a total of 71 copies of the DC-9-41, the last of which was delivered on March 7, 1979.

The DC-9-C9A is a specially equipped DC-9 Series 30 ambulance aircraft operated by the United States Air Force . The guy was named after Florence Nightingale . 23 of these were built and used from 1968 to transport patients and personnel. The last of these machines (serial number 876) was decommissioned in September 2005.

17 Series 30 and Series 40 aircraft were supplied with the designation C-9B (officially: DC-9-C9B ) as transport aircraft for the US Navy and the US Marine Corps .

A total of three copies of the DC-9-30 with the designation VC-9C (officially: DC-9-VC-9C) were produced as a VIP aircraft for the United States Air Force .

A DC-9 is used by the Californian skydiving operator Perris Valley Skydiving to drop skydivers. For this purpose, the passenger door in the extension of the central aisle in the rear of the aircraft was modified so that it can be opened during the flight.

As of July 2018, 44 units of the DC-9 are still registered, most of them freight aircraft.

As of July 2018, there are still four airlines from two countries worldwide that are using a total of seven DC-9s on commercial passenger flights:

A passenger aircraft of the type DC-9-15, built in 1966, with the aviation registration number N8860 has been in service as a service aircraft for the US news broadcaster Mercury Radio Arts since 2015 . It is a former passenger aircraft in a retrofitted VIP version.

Another former passenger aircraft of the type DC-9-31, built in 1971, N932ML, has been in operation as a test aircraft at Hawker Beechcraft since 2014 .

The Texan company Waterworld Jet Aviation owns a DC-9-32, built in 1972, N10876 with VIP equipment, which was formerly in service with the US Air Force. The company had the machine, which is currently in storage, painted in the colors of Air Force One .

As of July 2018, seven airlines from three countries are operating 30 DC-9 freighters:

As of July 2018, four machines in one country are still approved for military users and authorities:

Of the 973 Douglas DC-9s produced, 93 had to be written off as total write-offs by February 2019 because they were destroyed or damaged by accidents or criminal influences. This corresponds to about 9.53 percent of all DC-9s produced. 49 of these incidents resulted in fatalities, including 2,133 people. With 0.78 accidents per million take-offs, the average safety of the Douglas DC-9 corresponds to that of comparable aircraft series (Boeing 727 with a value of 0.73, Boeing 737-100 / 200 with 0.89).