This article deals with the concept of the callsign in radio operations; for punctuation see exclamation mark .

A callsign consists of a sequence of letters and numbers that are formed according to certain schemes. The first characters, the ITU prefix , are used to identify the nationality of the radio station. These prefixes are determined by the ITU and assigned to the states in one or more blocks . They usually consist of two characters, at least one of which is a letter. Some major countries use one-character prefixes and, in exceptional cases, three characters are used.

For better differentiation and easier handling during the allocation, the radio stations of the various radio services are allocated call signs according to certain schemes:

Historical development of the prefixes

The historical development of the prefixes for the German-speaking countries is shown in the following table:

The call signs are assigned accordingly by the national administrative authorities, taking into account the given prefixes. Not all options for call sign formation are used. In Germany, callsigns are issued by the Federal Network Agency for Electricity, Gas, Telecommunications, Post and Railways (BNetzA).

In the United States , television and radio stations traditionally use their call sign instead of their name to answer.

In the United States, radio amateurs also use their callsigns for their license plates
→ Main article : Amateur radio callsign

Callsigns are generally transmitted regularly in the amateur radio service. The allocation of the call signs to the individual radio stations or license holders takes place according to certain schemes that take into account, for example, the license classes, the geographical location or the use of the radio station (for example as a club station or relay radio station). 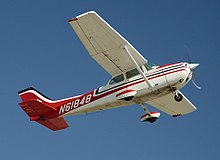 Air station call signs must be one of the following types:

The call signs of air stations may not be changed during the flight, unless the ground station has expressly assigned a different call sign to avoid confusion. The use of shortened callsigns is permitted under certain conditions.

†The designation used in radiotelephony is mostly derived directly from the airline's name (e.g. " Delta " or " Lufthansa "), but sometimes a completely different word (e.g. "Cactus" in America West or later US Airways) ). These designations are given in the articles on the airlines in the respective info box under "callsigns" and in summary in the list of airlines .

For the use of Morse code , a coast station is or has been assigned a call sign, e.g. B. DAN for Norddeich Radio or DHS for Rügen Radio (until the end of 1979, from 1980 Y5M ). When using radiotelephony , coast stations are not called with a call sign but with their name. The name is made up of the place name and the word "radio" or z. B. "Lock". Likewise, in the global distress and safety system ( GMDSS ), a coast radio station is also clearly identified by its mobile maritime radio service number ( MMSI ).

For ships registered in the shipping register, the distinguishing signal is also the call sign, e.g. B. DRAX for the Gorch Fock .

Callsign on the radio

In North America and individual states in South and Central America, radio and television stations are designated by their call sign. In most European countries, the call signs that were originally mentioned on the radio stations disappeared early; in Germany they were never used.

In the USA, the mandatory use of callsigns goes back to the radio history of the country and from 1930 with the licensing by the Federal Communications Commission . At the beginning of the 20th century, the then International Telegraph Union (ITU) assigned the country codes "W", "K", "N" and "AA" to "AL" to the United States in several steps. While "A" and "N" are used for military and amateur radio services, US broadcasters get callsigns starting with "K" or "W" when licensed by the FCC. Broadcasters located west of the Mississippi receive callsigns beginning with the letter "K"; Transmitter east of the Mississippi with "W". This regulation was introduced in January 1923 and is still in force today. Broadcasters licensed very early received only three letters and did not fall under the "Mississippi Rule".

In the 1940s, the first VHF stations (with frequency modulation ) were added to the original US medium and shortwave stations . The addition "-FM" was added to the call sign , and television stations from the 1970s onwards were given the addition "-TV" . The prefix is an integral part of the callsign. The callsign is also always licensed to a specific frequency. That is why there are, for example, the stations "KCBS" ( San Francisco , medium wave), "KCBS-FM" ( Los Angeles ) on VHF and "KCBS-TV" (Los Angeles), each of which is an independent transmitter.

Radio stations in the USA are perceived even more strongly as "radio stations" with a fixed location than is usual in Europe, for example. It is mandatory that all broadcasters in the USA give their callsign and their location, the “legal ID”, on the hour.