This article covers the genre of music. For the superordinate genre, see Metal . For additional meanings of the term, see Heavy Metal (disambiguation) .

Heavy metal ( English for ' heavy metal ') is a style of metal whose origins lie in hard rock , blues rock and psychedelic rock .

Due to continuous further development and the partial amalgamation with other musical styles, the term Heavy Metal is mainly used within the scene for variants based on the traditional varieties of the 1970s and 1980s; The shortened term metal is used as an umbrella term for the various subgenres .

Bands who wanted to shield the original heavy metal from external influences are often assigned to true metal . A term that was first promoted by Manowar . However, its representatives are not exclusively recruited from heavy metal, but also from other metal styles, especially power metal . 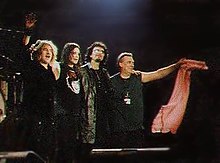 Heavy metal is a further development of the hard rock sound of the late 1960s / early 1970s, which bands like Led Zeppelin , Black Sabbath and Deep Purple propagated in terms of hardness and intensity . Led Zeppelin II (1969), Paranoid (1970) and Deep Purple in Rock (1970) are considered to be the first style-forming albums of the music genre called Heavy Metal from the late 1970s . The music of these bands cannot yet be fully assigned to heavy metal, as it is still rooted in traditional blues rock , progressive rock or psychedelic rock . Groups like Judas Priest and the bands of the New Wave of British Heavy Metal who appeared a few years later see themselves as the first pure metal bands, also from their own understanding . 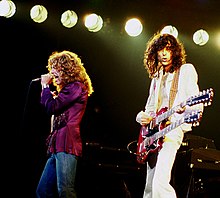 The origin of the term heavy metal in a musical context is not known. An early use in a popular cultural context can be found in 1962 in the novel The Soft Machine by the counterculture author William S. Burroughs with the character Uranian Willy, the Heavy Metal Kid . In his next book, Nova Express from 1964, he developed heavy metal further as a metaphor for addictive substances.

"With their diseases and orgasm drugs and their sexless parasite life forms - Heavy Metal People of Uranus wrapped in cool blue mist of vaporized bank notes - And the Insect People of Minraud with metal music."

Given the release dates of his works, it is unlikely that Burroughs intended to refer the term to rock music , but it may have influenced the later development of the name.

- Steppenwolf : Born to Be Wild

The style of music itself cannot yet be called Heavy Metal . In the early days, the piece established a connection between heavy motorcycles and their sound (referred to as “heavy metal thunder” in the text), heavy guitar music and a feeling of urge for freedom and a lack of conformity.

The English book The History of Heavy Metal claims the name comes from hippie jargon, where heavy refers to an intense strong mood, while metal further specifies that mood as crushing and heavy as metal . Other sources attribute the term to the English press, which is said to have called the music of the band Black Sabbath early on as "Heavy Metal", as the four members of the band partly came from the English steel industry city of Birmingham or the vicinity of the city .

The word heavy , meaning serious or profound, had previously become part of beatnik and counterculture slang , and references to heavy music  - typically slower, more intensely amplified variations of normal pop music - were already common. In fact, the band Iron Butterfly explained their name with reference to it: "Iron - symbolic of something heavy as in sound, Butterfly - light, appealing and versatile [...] an object that can be used freely in the imagination" . Their 1968 debut was entitled Heavy . The fact that Led Zeppelin's name - referring to Keith Moon's joke that they would "go down like a leaden balloon" - alluded to a heavy metal, most likely paved the way for this expression.

Some suspect the geographical origin of the expression in the English industrial area of ​​Birmingham, in the vicinity of which bands like Led Zeppelin , The Move or Black Sabbath were founded.

Sandy Pearlman , producer, manager and songwriter (lyricist) of Blue Öyster Cult claims to have used the word heavy metal for the first time as a term for a genre of rock music in 1970.

A controversial hypothesis about the origin of the genre offered "Chas" Chandler, a manager of Jimi Hendrix , 1995 in an interview with the PBS telecast rock and roll: "[heavy metal] was a term originated in a New York Times article reviewing a Jimi Hendrix performance ". In this article the author is said to have described the music as "like listening to heavy metal falling from the sky". However, the exact source for the controversial thesis has not been found.

In addition, there is a very widespread opinion that the name Heavy Metal is derived directly from Hard Rock . At the time of its creation, hard rock was the toughest style of music the market had to offer. When rock music got harder and harder in the seventies, and the original hard rock (possible translation: "hard stone") was still harder and more aggressive, they looked for something harder than in real life for the purpose of naming the new musical style Stone would be - and that was metal. Hence, according to the music magazine Rolling Stone, the name heavy metal comes from the music that is harder than hard rock.

The first adequately documented mention of a musical style appears to be in the May 1971 issue of Creem magazine . In a review of Sir Lord Baltimore's Kingdom Come it says: "Sir Lord Baltimore seems to have down pat most all the best heavy metal tricks in the book". The critics David Marsh and Lester Bangs later used the term again and again in the context of bands such as Deep Purple , Led Zeppelin or Black Sabbath , and consolidated its use according to popular opinion. Even if music critics initially used heavy metal as a derogatory term, fans of music quickly adopted the term, which is evident in the self-designation of the New Wave of British Heavy Metal (NWoBHM) bands , which saw themselves as the second wave of this independent style. The term New Wave of British Heavy Metal was first used by Geoff Barton in the British music journal Sounds in 1979.

In today's usage, the term Heavy Metal in the strictest sense often means the bands that play in the style of the NWoBHM movement of the late 1970s and 1980s such as Iron Maiden , Saxon and Judas Priest , while the band generation of rock groups like Led Zeppelin , Uriah Heep and Deep Purple is often referred to as classic hard rock in rock journalism . To distinguish them from the newer stylistic directions of heavy metal, the term classic metal is occasionally used for those bands instead of heavy metal .