from Wikipedia, the free encyclopedia
This is the spotted version , flagged on June 12, 2020 . There are 4 pending changes that have yet to be viewed.

Judas Priest is a British heavy metal band from Birmingham that has been considered one of the most influential bands in its genre since the 1970s. Their leather and rivet gaps set accents and songs like Breaking the Law , United or Living After Midnight brought the band commercial success beyond the metal scene .

Judas Priest was originally a blues band formed in 1969 that consisted of singer Alan Atkins, guitarist Bruno Stapenhill, drummer John Partige and guitarist John Perry. Perry died in a car accident that same year and was replaced by Ernie Chataway, who died of cancer in 2014. However, this band fell apart again after a few years. The later band guitarist , Kenneth "KK" Downing from West Bromwich near Birmingham was initially turned down after an audition. After the breakup of the first band, singer Alan Atkins joined Downing's group Freight , which also included bassist Ian Hill . Since Downing previously intended to play in Atkins' band, the band was renamed and used the name Judas Priest from now on. The name came from Bob Dylan's song The Ballad of Frankie Lee and Judas Priest from the album John Wesley Harding .

The line-up with drummer John Ellis toured the UK without a record deal until 1973, when Atkins left again. The band only recorded two songs in this formation, Good Time Woman and We'll Stay Together . Sue Halford, Ian Hill's friend, brought her brother Rob Halford as singer and John Hinch as drummer to the band after Atkins' departure in 1973 , who had previously played together in the band Hiroshima. In 1974 Glenn Tipton joined Judas Priest as a guitarist. This line-up with the guitarists KK Downing and Glenn Tipton, the bassist Ian Hill and the singer Rob Halford has significantly shaped the image of Judas Priest.

The first album Rocka Rolla was released in 1974 on the independent label Gull Records and partly contained songs that arose from the collaboration with Atkins. Judas Priest was playing blues and rock at the time .

In March 1976 the album Sad Wings of Destiny was released , which already clearly showed style elements of heavy metal with songs like The Ripper , Deceiver , Tyrant , Island Of Domination and the classic Victim Of Changes . Shortly thereafter, the band signed their first major record deal under the major label CBS / Columbia .

In 1977 Sin After Sin was released. With this album, Judas Priest turned completely to heavy metal for the first time . In the same year, the band played a first tour through America in the opening act for Led Zeppelin , in which the newly entered drummer Les Binks also played the drums. After the great success of the tour, the albums Stained Class and Killing Machine were released (in America under the name Hell Bent for Leather ). In 1978 Judas Priest completed a successful world tour; The band was particularly well received in Japan. In 1979 the live album Unleashed in the East , recorded in Japan and produced by Tom Allom , was released. In 1979 Judas Priest toured as opening act for AC / DC , u. a. also in Germany with several appearances. 1979 Les Binks left the band and was replaced by Dave Holland. 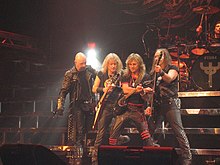 The band's cult album entitled British Steel from 1980 is considered a. as partly responsible for the boom in the style of the New Wave of British Heavy Metal . With Breaking the Law , Living After Midnight and United , the album contains some of Judas Priest's most famous songs. For the first time, the band recorded music videos. They also received a gold record for this album. Her album Point of Entry was released a year later . The 1982 album Screaming for Vengeance again marked a high point for Judas Priest and was awarded double platinum in America, platinum in Europe and Japan. In December 1983 Judas Priest performed together with Iron Maiden , the Scorpions , Ozzy Osbourne , Def Leppard and other representatives of hard rock and heavy metal at the Rockpop in Concert - The Heavy Metal festival in Dortmund's Westfalenhalle . The Second German Television recorded the concerts and broadcast some excerpts in February 1984. Among other things, played Judas Priest in 1985 as part of the Live Aid - benefit concert .

In 1986 the band broke new ground musically with Turbo when guitar synthesizers were first used. The album caused disappointment with many old fans due to an alleged "commercial orientation", but was still successful and opened up new social fan groups for the group. A few weeks after the album Turbo was released , the two filmmakers Jeff Krulik and John Heyn filmed the 17-minute documentary Heavy Metal Parking Lot on May 31, 1986 in the parking lot in front of the Capital Center event hall in Landover , Maryland , on the occasion of a Judas Priest concert in the hall. Over the years, the musical short film has achieved cult status in the American heavy metal scene. In 1987 the second live album Priest… Live! , for which there is also a DVD.

In 1990 Painkiller appeared , on which the new drummer Scott Travis (including Racer X ) brought about a significant change with a harder sound and double bass .

Separation and reunification (from 1992)

After completing the Painkiller Tour in 1991, singer Rob Halford announced his departure from the band. In 1993 the band released the best-of double album Metal Works , which contained the most successful and best songs by Judas Priest between 1977 and 1990. Rob Halford co-founded Travis Fight with Scott .

It was not until 1997 that the new singer Tim Owens tried to revive the band. The albums Jugulator and Demolition as well as the live album Live Meltdown 98 were quite successful commercially, but did not convince many old fans. In order to enable the band to reunite with Rob Halford, who was quite successful with his solo projects, Tim Owens left the band in 2003 and switched to Iced Earth , but founded his own band Beyond Fear in 2005 . In 2004 the reunited band played at the Ozzfest .

On February 28, 2005, the new studio album Angel of Retribution was released. A live DVD containing material from the Angel of Retribution Tour followed in early 2006 under the title Rising in the East , based on their first live album, which was also recorded in Japan .

The album Nostradamus was released as a double CD on June 16 in Europe and on June 17 in America. The associated world tour included songs Priest hadn't played in 20 years. On the US tour, Priest played with Heaven and Hell and Motörhead . In the spring of 2009, further concerts under the motto Priest Feast followed in Germany, they received support from Megadeth and Testament . In early 2010 the band received a Grammy Award for Best Metal Performance for their song Dissident Aggressor .

On December 7, 2010, the band announced that the Epitaph World Tour in 2011 would be the last major world tour. The band also performed at the Wacken Open Air 2011.

The band released a press release on April 20, 2011, stating that KK Downing is leaving Judas Priest with immediate effect and will not be participating in the Epitaph World Tour . He was replaced by the 31-year-old British Richie Faulkner . The reason he gave on his website was less his health than the differences between him, the tour management and the band.

On July 11, 2014, the studio album Redeemer of Souls was released in Germany.

The Redeemer of Souls Tour from October 2014 to December 2015 also took Judas Priest to five concerts in Germany (Hamburg, Berlin, Frankfurt, Stuttgart and Oberhausen) as well as to the Rockavaria Festival in Munich , to Rock im Revier in Gelsenkirchen and to Wacken Open Air . The concert in Wacken was released under the name Battle Cry on March 25, 2016 on CD and on April 1 on Blu-ray and DVD.

On February 12, 2018 it was announced that Glenn Tipton would no longer take part in the tour planned for 2018 due to his 10-year-old Parkinson's disease . He was replaced by Andy Sneap , who produced the Firepower album .

The great influence of Judas Priest on the metal scene is shown, among other things, by a large number of bands that named themselves after the song names of their idols, including Exciter , Running Wild , Sinner and Steeler . The inclusion of guitarist Glenn Tipton in 1974 enabled Judas Priest to include two-part guitar harmonies (so-called twin guitars) modeled on bands like Thin Lizzy in the musical framework. These and the operatic singing became the band's trademark. Judas Priest and Iron Maiden paved the way for later metal bands of all genres to combine technically challenging two-part guitar harmonies with other techniques such as lower-pitched guitars or power chords.

In 1985, two American teenagers, James Vance (then 20) and Raymond Belknap (19) planned to commit suicide together with a gun. On December 23, 1985, they met in a playground in Reno, Nevada and drugged themselves . Belknap was the first to hold the rifle under his chin and shot himself. Vance wanted to follow him, but survived with a face that was cruelly disfigured from then on. His parents then sued Judas Priest. Your argument: your son was a satisfied boy in a happy family. Only the satanic music of Judas Priest could have driven the young men to such an act.

In 1990 - James Vance had died of a medication overdose in 1988 - Judas Priest was brought to trial. In the Nevada courtroom (where the entire band was in the dock), Judas Priest's music was examined for hidden messages. Short excerpts of the song Better by You, Better than Me - the cover version of a song by the band Spooky Tooth - were played, and Halford sang a few lines of this title in the courtroom. The prosecutors saw this song as a hidden call to suicide; the request “do it” (“do it”) is hidden in the subliminal area. The defense argued that the “do-it” phrases came about by chance and were not a specific request. Rob Halford commented on the allegation of using subliminal messages that it would be counterproductive to encourage suicide on one's fans; however, he would prefer to encourage fans to buy more records. Furthermore, it emerged in the process that Vance and Belknap were by no means the happy, carefree youngsters from harmonious family backgrounds that the plaintiffs portrayed them as. Rather, they had suffered significant adjustment difficulties and had drug histories that their parents were not aware of or that they were not aware of. The judge ruled that the "messages" were random sounds, possibly Halford's breath sounds. The band was acquitted.

Rob Halford stated in an interview in 2007 that he still regards the fact of being sued for the suicide of two fans as completely absurd. However, he was treated fairly by the American judiciary.

The 1991 documentary Dream Deceivers: The Story Behind James Vance vs. Judas Priest explains the process and its background in detail.

1Appeared in the United States as Hell Bent for Leather .