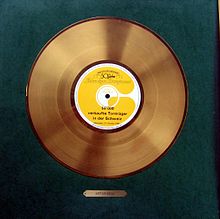 A gold record is in the music industry a price of musicians , producers and composers for the sale of a minimum number of audio or visual media , all formats such is awarded in a country CD , LP , DVD , Blu-ray and downloads counted become.

In addition, there is the platinum record award for even higher sales, usually twice as high as for the gold record. To further increase there is triple gold, double platinum, quintuple gold and so on, in some countries like the USA as a special increase the diamond record . The silver record for a lower number of units sold is only awarded in a few countries, such as Great Britain .

The prices are in the United States since 1958 by the Recording Industry Association of America (RIAA) and other countries since the 1970s by the International Federation of the Phonographic Industry awarded (IFPI). The golden record should stand as an award for an "artistically and economically successful production".

The idea of ​​the gold record goes back to the record company American Record Corporation . Her director Arthur E. Satherly presented Gene Autry with a gold- plated copy of his single That Silver Haired Daddy of Mine in late 1931 , after it had sold over 500,000 times. On February 10, 1942, Glenn Miller received a gold record from the RCA-Victor record company during a radio broadcast for sales of over 1.2 million copies of Chattanooga Choo Choo . According to some sources, this is considered to be the first officially awarded gold record.

Development of the procurement guidelines 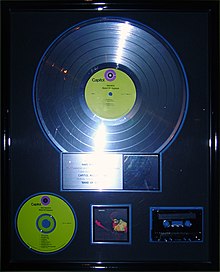 In 1976, the RIAA expanded the awards ceremony to include the platinum record for one million singles sold, and in 1984 the multi-platinum category for more than two million albums sold. On April 22, 1976, the first platinum award for more than 2 million copies sold of the single Disco Lady was given to singer Johnnie Taylor .

In 1988, only four singles reached gold status in the US. For comparison: In 1978, 61 singles were "gold-plated". Because of the increasingly sluggish sales of singles, the RIAA cut the guidelines in the gold and platinum categories for singles by half in 1989. On March 16, 1999, the RIAA introduced the diamond record for ten million albums or singles sold.

Awarding an award based on sales is problematic when the phonograms are sold on a commission basis , a practice common in the United States. The RIAA awarded a gold record to the band The Fixx on November 22, 1984 for 500,000 copies of the album Phantoms sold . However, about 150,000 copies went back to the record company, so actually only 350,000 copies were sold. 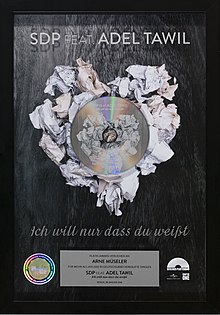 Until 1975, gold records were awarded to performers in Germany too, but this was done by the respective sound carrier manufacturer according to inconsistent and not officially verified criteria.

According to a guideline of January 1, 1976, the number of rated sales in Germany is determined based on the records sold to the trade that were reported to GEMA or another collecting society of the authors as domestic sales. It is therefore not a question of the number of records actually sold to the end customer .

The relevant minimum numbers were significantly reduced following a resolution of October 30, 2003 following declining sales in the music industry. In Germany, the hurdle for albums is now (instead of 250,000 as before September 24, 1999) retrospectively to January 1, 2003 at 100,000, for singles at 150,000 units. Samplers on which different artists or groups are represented can only receive a gold award if the majority of the pieces on the phonogram have not previously been published.

In Germany, the golden records are awarded by the record companies and registered with the Federal Association of the Music Industry . An independent auditor checks the information provided by the record companies. For the first time, gold records that had already been awarded were revoked from an artist at the end of 1990. An examination had shown that the record company of the Hamburg band Helloween had added the exports of the album Keeper of the Seven Keys Part 2 to the domestic sales in order to arrive at the required number of units sold.

However, there is no legal or other regulation about the award of the "precious metal". Only the record labels and music publishers affiliated to the Federal Association of the Phono Industry undertake to adhere to the sales volume for awarding a gold record. In contrast, any record company that is not affiliated to the association can independently award such awards to their artists; no matter how many units were actually sold. However, the hologram of the federal association is missing on these awards.

The record itself is not an original record by the artist in question, but either a normal long-playing record, which was then coated in an elaborate, chemical process to resemble gold, or a "mother" made of copper or other precious metal , 24 carat gold plated.

At some special awards ceremonies, a gold-like coated music cassette case was also added. In the CD age, “CD stampers” (“CD press mothers”) are made with 24-carat gold or blanks with an 18-carat medical gold layer are vaporized.

Since June 7, 2014, the single charts have not only counted sales, but also so-called premium streams, i.e. access to streaming providers that are not counter-financed by advertising but are paid for by subscription. 200 streaming calls correspond to one sold unit, which, however, must be played for at least 31 seconds.

Until 1992, the gold record was awarded in Iceland for 3,000 units sold, the platinum record for 7,500 units. As sales increased, the barriers were raised to 5,000 units sold for gold and 10,000 units for platinum. As of 2012, these hurdles apply in Iceland to both the national and the international repertoire. The same numbers apply to music video sales.

In Germany, Herbert Grönemeyer is the most successful artists with 79 gold records for music products and additionally 27 for music videos (as of: September 24, 2012).

The world's most successful German artist is James Last with 208 gold records (as of September 24, 2012).

Overview of the award rules

A. The award threshold in Germany is based on the first publication of the respective title.
B. These include the program types (identification in the PHONONET article stock) Kinder Wort (301), Kinder Musik (302) and Kinder Klassik (303).