In the music industry, a music album (also known as an album for short ) is the name given to a compilation of several pieces of music by an artist , a music group , a composer or on a topic, independent of the sound carrier . Colloquially, an LP is also referred to as an album. Other forms of presentation are the single and the EP, which forms a transition between album and single .

According to the guidelines of the German music charts , a compilation is considered an album if it contains at least five pieces of music (individual tracks) or has a playing time of more than 23 minutes. Remixes do not count in the sense of this definition. An individual piece on the album, the EP or the single is also referred to with the term title (English track ), which is legally different from the music title . The table of contents of audio medium is consequently Title List ( English track list ). 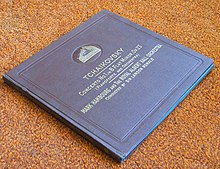 The use of the term album in the recording business has its origins in the early days of record production . Shellac records only had a playing time of three to five minutes per record side, depending on their diameter. Nevertheless, customers wished early on to acquire complete recordings of longer musical works. The record industry complied with this request by distributing the corresponding compositions on many sides of the record. These complete recordings, which could consist of up to thirty records, were sold in special book-like albums made of sturdy cardboard, which were provided with separate pockets for each individual record and often contained a few pages of text with information on the respective musical work . The first of these heavy and unwieldy “record albums”, which at first glance actually resembled photo albums, were brought onto the market by the record label Odeon as early as 1905.

Shellac record albums were despite their obvious disadvantages - if you wanted to enjoy a Wagner opera, you had to change or turn the record sixty times - an important revenue factor for the record industry for more than fifty years. They became superfluous when the first long-playing records were ready for the market around 1950. Now a single record contained as much sound material as an entire album before - so the term, which had actually become meaningless, was carried over to the new medium; "Album" became colloquially a synonym for "LP"; later the word was partly adopted for compact discs with a correspondingly long playing time. The best-selling music album since the 1980's Thriller from Michael Jackson - recordings sold about 110 million worldwide and only 27 million copies in the United States.

In 2003, the American music magazine Rolling Stone published a list of the 500 best albums of all time . In the first decade of the 21st century, the number of albums released each year in the United States doubled.

A music album used to be seen as a unit between the sound carrier and the associated record cover . The size format of a record album (31.5 × 31.5 cm) allowed a cover design on the front, while liner notes and / or the track list were usually accommodated on the back . The design function is of secondary importance for music albums in the format of the CD or earlier for the MC .

Today albums appear on a variety of possible storage media . It has also become widespread in the meantime to obtain an album as file (s) over the Internet , which means that one no longer obtains a separate physical product. However, in contrast to the singles, a more conservative buying behavior can be observed, sales of albums remained stable.

The debut album is the first published album by an artist / band. The most successful debut album by a band is Boston (1976) by the band of the same name , of which 17 million copies were sold in the USA - followed by a large margin by Business as Usual (1981/82) by Men at Work with 6 million. In a number of statistics, however, before Boston Guns n 'Roses ' album Appetite for Destruction (1987) is listed, of which 18 million copies were sold in the USA. It is mostly considered the group's debut album, as their first release Live?! * @ Like a Suicide (1986) was an EP , but EPs are usually not considered an album (see introduction).

The most successful debut album by a female artist in the United States was Whitney Houston's 1985 album of the same name, selling 13 million copies in the late 1990s . In 1999, it was surpassed by Britney Spears , who sold over 14 million copies of her US debut album ... Baby One More Time sold. Spears was replaced nine years later by Lady Gaga , whose debut album The Fame from 2008 sold 15 million times in the United States.

This format came on from 1943 with the spread of Broadway shows and especially musicals . The original line-up can be heard on the stage. Often times the album is taken from the Broadway production Oklahoma! named as the first album of its kind (6 records at 78rpm), for which Decca Records secured the copyright on December 2nd, 1943. The original cast album is considered an essential element of today's musicals.

A tribute album is a music album that only contains cover versions of tracks by a particular musician that were recorded by other artists. In this way, the people involved express their appreciation (English tribute ) to the original performer.

An album that deals with a specific topic is called a concept album . A greatest hits album (also best of or compilation ) is an album that contains the most successful hits (usually mainly singles, if it is only singles, often under the name "Singles Collection") of an artist . Concert recordings are often sold as a live album . In contrast, a studio album is an album that was recorded in a music studio . A double album is a compilation of two sound carriers that are published under a common cover . If there are more than two sound carriers, one speaks of a box or a box set. Today, CD collections that are offered in a single package are returning to the original meaning of the term album . Often certain editions of an album contain one or more bonus tracks regionally or for a limited time . Some albums are only marketed as limited editions with a very limited number of copies.